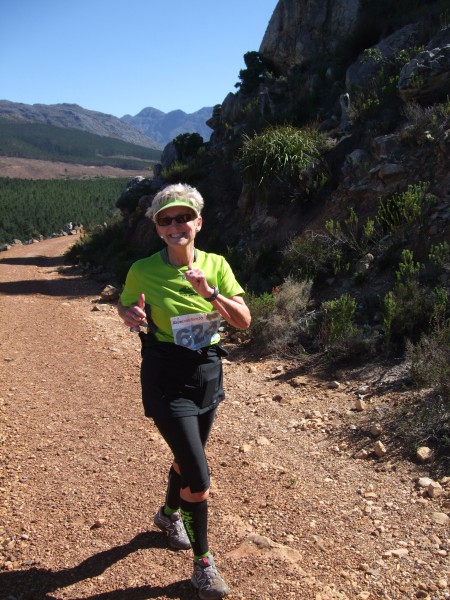 You’ll find Marianne Nelson happily bounding along in trail running events, defying not only her age, but also the gloomy original prognosis of her doctors, who said in 1999 that she should walk to combat her osteoporosis, but under no circumstances should she run… but nothing was going to hold this galloping granny back. – BY SEAN FALCONER

At the age of 71, many people are no longer thinking about running on the roads, let alone tackling gnarly, uneven trails, but just about every weekend you will find Marianne Nelson of Durbanville doing a trail running event somewhere in the greater Cape Town area. Furthermore, this mother of three and grandmother of six will be chatting up a storm with the runners around her, stopping to take photos and WhatsApping them to husband Alan, always waiting for her at the finish, or her running friends and family, and then merrily carrying on up the trail. It’s a truly inspiring sight.

These days Marianne averages around 40 trail races a year, and also still does a bit of road running – she recently competed in the Western Province Half Marathon Champs race – but says she now struggles to run on tar, and far prefers the trails. Interestingly though, she only began running very late in life, thanks to a medical scare. At the age of 55, she was diagnosed with severe osteoporosis in her back and feet, and underwent surgery, where the doctors took a piece of her hip bone to fuse three vertebrae in her spine and also reconstructed the big toe on her left foot. Then the doctors advised her to participate in some form of sport or exercise activity, in order to build up her bone density, as it was registering at just 57%.

Walking for Health
So Marianne joined Run/Walk For Life in 2000 and started walking, but by her own admission she was in poor shape. “I could not even get around the rugby field once without stopping to rest. I had never done any sport – even at school I was in the Drummies, not playing sport – and after school I was raising kids and looking after Alan while he was studying and moving around the country while working for the South African Air Force, but at 55 I started walking, because the doctors said I would go only one way if I didn’t,” says Marianne. “I have a cousin, two years younger than me, who suffers from the same disease, and she is in frail care now, so I consider myself lucky. I should have started running much earlier than 55, but still, it has turned out well for me.”

At Run/Walk For Life she met Cathy Taylor, a year older and also getting into walking to combat her osteoarthritis, and the two became inseparable friends and passionate co-walkers, quickly progressing from social walking to competitive race walking, and then to running. They became known as the ‘Twins,’ since they always competed in the same club kit and even the same shoes, and together they took on some mighty athletic feats. They moved up to 10km and 20km race walking, added 5000m and 10,000m race walking on the track, and by 2009 both had been awarded national colours for their exploits on the track.

In between that they also took up running, going on to run the Old Mutual Two Oceans Marathon a few times, and Marianne also added two Comrades Marathons to her resume, running it in 2004 and 2005 and earning two Vic Clapham medals. “I never knew I would be able to do something like that, but thankfully they had extended the cut-off to 12 hours, otherwise I would never even have gone to Comrades. I ran that whole first Comrades with my son, Lafras, pacing me, and at 80km I told him I’m really tired, but he said, ‘You’ve done 80km, so you’re nearly home, just keep going.’”

In Loving Memory
Tragically, Lafras was killed in a car accident in 2010, fours after Cathy also lost a son in an accident, and this spurred them on to one of their greatest athletic feats. In 2011, at the ages of 66 and 67 and despite never having done any trail running before, they entered themselves as ‘Team Grannies’ in the gruelling three-day AfricanX Trail Run in Kleinmond, running it in memory of their late sons, and captured the hearts of everybody at the event, thanks to their unwavering smiles and positive attitude, no matter how tough the going got or how long they were out on the trails. Come the end of the event and they were awarded the Sanet Wentzel Trophy, which is given to the runner or team that embodies the best spirit in the event each year, and they received a standing ovation from all their fellow runners.

“Naturally, that AfricanX remains one of the highlights of my running career, and it triggered me to really get into trail running. After my son’s death, I wanted to get away from the competitiveness of road running, and I realised out in nature there is much less competition and a more relaxed atmosphere,” says Marianne. “Added to that, the Western Cape really lends itself to trail running, and I have run some stunning trails, like Olyfberg, Meiringspoort and Featherbed, but to be honest, every trail run is a highlight for me. I love them.”

Marianne says other highlights of her running include the first time she was selected for Western Province and competed at the SA Cross Country Champs, the first time she competed at the SA Masters Track and Field Champs, and the first time she put on her Springbok colours, but most importantly, she says it is about the friends she has made through the sport. “I have a lovely group of ladies that I regularly run with, and nowadays they think they’re all photographers. Alan jokes that we could all finish a good 20 to 30 minutes earlier at races if we didn’t stop to take so many pictures!”

Still on the Bucket List
Looking ahead, Marianne says she is thinking about running the AfricanX again next year, and has a potential partner lined up, since Cathy’s health does not allow her to run as much any more and she is struggling on the trails, but Marianne still has to decide if she can manage the three days of trail and still go after her 10th Two Oceans Half Marathon just after that. Other races on her bucket list include the Houtkapper Trail in Knysna and the Dodo Trail in Mauritius, and at the time of writing she was about to leave for Croatia with Cathy to go run two half marathons.

“As you can see, I have a great bucket list, but in the meantime I’m just happy doing nice trail runs each weekend – and trying to catch up with Phil Rabinowitz’s record of still running at 100! I’ve run over 20,000 kilometres and never had a blister or a pain, my bone density is now up around 80%, and I want to show people that age is a state of mind, that if you put your mind to something, you can do anything!”