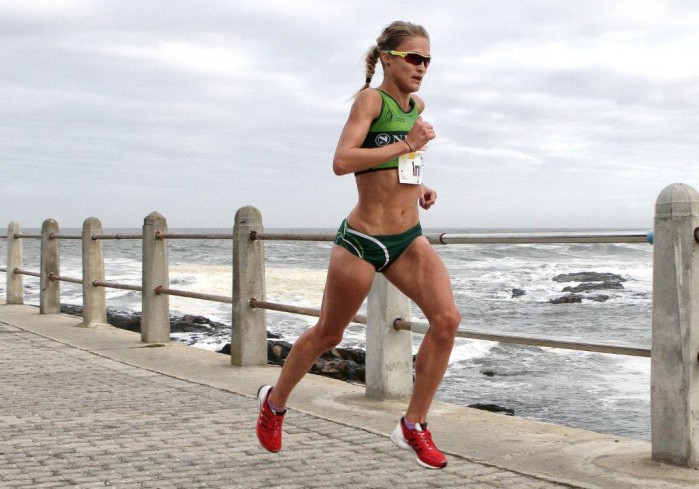 Whether she is called a ‘running mom’ or a ‘mom on the run’, Irvette van Zyl, hopes to get her Olympic dreams back on track when she competes in the Spar 10km Women’s Race in Johannesburg on Sunday.

It will be the Olympic marathoner’s first race since the birth of her son, Louis, in September.

“I am not sure if running a 10km on Sunday will be a wise thing to do at this stage, but I really need to start racing again. I think the longer I wait, the more difficult it will become. Anyway, I am not planning to race seriously. I just want to be there to experience the joy of running again and to watch everybody else running and enjoying themselves. I really miss it.

“Luckily Sunday’s race is nothing serious for me. It will only be 10 kilometres and I don’t have any aspirations. It will be great just to finish,” said the Tuks/HPC athlete who went out for her first run on Monday (5 October).

During the past few weeks she kept fit by doing some swimming and cycling.

If everything goes according to plan Van Zyl’s first serious race will be in November when she plans to race the Soweto 10km.

“It is still about four weeks away and hopefully I will be fit enough by then to be able to race properly. I am hoping to finish in the top-five in Soweto but we will have to wait and see if that is possible.”

Van Zyl desperately wants to represent South Africa at next year’s Olympic Games in Rio, especially because it will probably be the last opportunity for her and her husband, LJ (400-hurdler), to do so together.

“I don’t want to be only a spectator in Rio to watch LJ run. That is the reason why I have decided to try to qualify in the marathon as well as the 10 000 metres for the Olympics.

The Tuks/HPC athlete has not yet decided which marathon she will run in April to qualify for the Olympics.

“If it were up to me I would have loved to run the London Marathon because it is the only race where good weather can more or less be guaranteed. Unfortunately, because it has been quite a while since I have competed in an international marathon, I have to race where my agent tells me to.”

According to Van Zyl, being a mom is an experience which she will not trade for anything in the world.

“I am surprised at how fast he is growing. Just spending time with Louis every day is an amazing experience. One of the best things that happened to me since becoming a mom is that I have become much calmer than I used to be. I don’t get freaked out by small things any longer. I think this will definitely be a plus factor that will stand me in good stead when I try to go to Rio as an athlete rather than only as a spectator.”