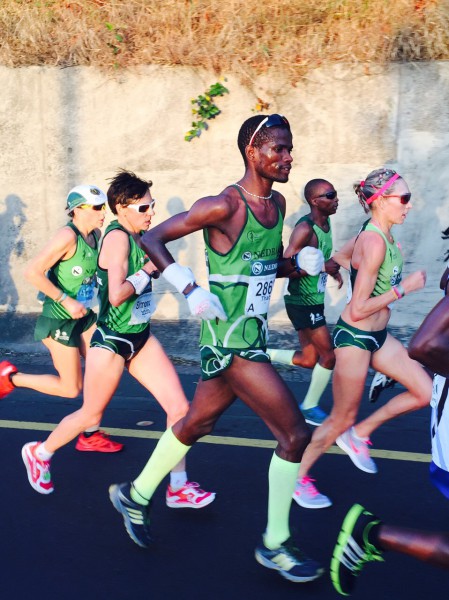 This was what Charné Bosman (Nedbank) said to the Russians in reply to their question about what the secret of South Africa’s top female ultra-runners was that enabled them to win the Comrades back for South Africa.

On Sunday Caroline Wöstmann (Nedbank) won the Comrades in a time of 6:12:22. Bosman finished second in 6:33:24. Both athletes are also sponsored by Tuks/HPC. It was the first time since 1993 that two South African women finished first and second.

What made their performance even more significant is that since 1998, when Rae Bisschoff won the Comrades, no other South African athlete has been able to do so. In fact, the women’s race at the Comrades was totally dominated by the Russians who won on no less than 12 occasions. Athletes from Germany won four times and athletes from the USA twice. Last year Eleanor Greenwood (Britain) was the winner.

“I jokingly said to the Russians that Caroline and I are the new ‘twins’ of ultra-racing in South Africa and that there is no secret to our performance except doing the long hard hours on the road and listening to what the coach says.

“To finish second in the Comrades is really a dream come true. Ever since I took up ultra-racing my dream was to get a podium finish at the Comrades and now I have managed to do so. I think my achievement has not really sunk in,” the Tuks/HPC athlete said late on Sunday night.

Bosman obediently stuck to the game plan on which she and her coach Lindsey Parry(Tuks/HPC) agreed, kilometre after kilometre. And it paid off. With 15 kilometres to go she caught up with and passed the Russian twins, Elena and Olesya Nurgalieva, to move into second place. This was where her dream became a reality.

“The moment I passed them, it was as if I suddenly received a new surge of energy. I promised myself that, no matter what, I was not going to let them catch up with me again.

“Going up Polly Shorts I was still running somewhat conservatively, remembering the advice given by the nine-time Comrades champion, Bruce Fordyce, in his book titled ‘Running the Comrades. His advice was to glide up a hill and not to fight it. But once I got to the top there was no stopping me. I upped my pace and managed to open an 8 minute lead on the twins.

“The spectators along the road definitely made things easier with the way they cheered me on. I had no idea how ‘hungry’ the South African sports public was to see South African female athletes succeed in the Comrades. The prospect of Caroline winning with me in second place really excited them. To be able to fulfil their wish made me feel really proud to be a South African.”

Bosman is full of praise for the role Parry played in her second-place finish.

“There is no better coach than Lindsey. As an athlete I trust him utterly. He knows how to get us athletes to perform to the best of our abilities. What makes him such an excellent coach is that he does not believe in letting his athletes push themselves deep into the red during every training session. For him it is never a case of his athletes just running, hoping for the best. Lindsey carefully thinks about every kilometre he makes us run before he tells us to do so.

When asked about next year’s Comrades, which will be the down run from Pietermaritzburg to Durban, Bosman admits that she has no experience of this race.

At last year’s Comrades, she collapsed during the race because of a dysfunctional thyroid. She was unconscious for a few minutes and had to ‘finish’ her race in an ambulance.

“I should not have run last year because my thyroid count was quite off the charts. I was really sick. It was rather awkward when I ran past where I had to abandon last year’s race. But I feel up to the challenge to try for a good result in the ‘down’ Comrades also.”

But for now running is the last thing Bosman wants to think about. She and her husband, Carel, will fly to Europe tomorrow where they will attend three Diamond League Meetings (Rome, Birmingham and Oslo).

When she is back and training on the road again, she might consider doing the Nelson Mandela Marathon. However, the decision is not hers alone to make. Parry will have the final say in the matter.