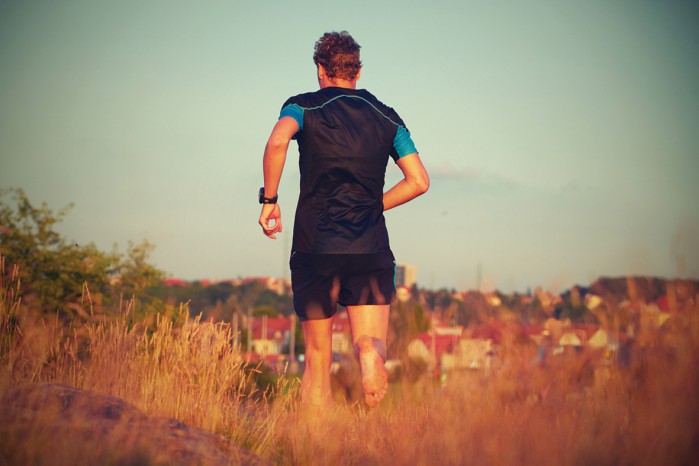 To run shod or to run bare, that is the question to ask your feet, and new research is pointing to the fact that barefoot running might not be the solution that some people claim it to be.

Throughout human history, people have run barefoot, but it was in recent years that barefoot or minimalist running really became popular, as coaches and therapists saw that running without traditionally built-up cushioned shoes seemed to have a positive effect on injury-proofing and making their runners more efficient. That sparked a massive change in shoe construction as minimalist shoes flooded the market, but scientific research has yet to reach consensus regarding the risks or benefits of barefoot running.

Advocates of the bare feet argue that traditional shoes promote an unnatural, hard heel-strike, whereas running barefoot promotes a healthier, more efficient midfoot or forefoot strike pattern, thus reducing the risk of repetitive stress injuries, and that is why Nicholas Tam, a doctoral student at the Exercise Science & Sport Medicine faculty of the University of Cape Town, undertook a study of barefoot running last year for his PhD.

Volunteers Needed
“We recruited 30 traditionally shod runners, running in normal cushioned running shoes, who consented to progressively increase their barefoot running over an eight-week period, starting with walk-running, and aiming to be able to run 40 minutes barefoot by the end of the study,” says Nic. “We started them on the indoor track at the Sport Science Institute, then moved to a hard-packed grass track, and from there on to tar. We tested their biomechanics, kinematics and kinetics, including joint angles, footstrike patterns, stride lengths, loading rates and more, and we also did electro-myography and muscle strength testing, first in normal running shoes, and then in barefoot conditions, looking at their before and after running economy.”

Nic says that all of the test subjects could run 40 minutes barefoot on tar by the end of the study, but his research kicked up some interesting findings. “All the pro-barefoot research was touting initial loading rate, the force as the foot touches the ground, which is increased by the heel-strike pattern promoted by traditional running shoes, so we wanted to see if the athletes could reduce their loading rate without us instructing them, but we found that when athletes who run in shoes takes off their shoes, they tend to still heel-strike, not just automatically become midfoot strikers.”

Interesting Findings
“Approximately half of the group remained largely heel-strikers, despite a slight change in footstrike pattern, and thus their loading rate remained high. Another quarter showed a favourable response, landing on the forefoot or midfoot, and thus reduced their loading rate, but the remaining quarter actually landed on their heels even harder, with higher loading rates! What we found is that the 25% who responded positively used a different muscle recruitment strategy, with more work done by the quads and glute stabilisers, and less by the hamstrings. We also found that when running barefoot, the athletes tended to flex their ankles more, so the ankle became more of a shock-absorber than the knee, which had done most of the shock-absorbing when they ran in shoes.”

The most telling finding of the study, however, was that those runners who went back to running in shoes showed no marked change in running efficiency, while those who continued running barefoot could see an improvement in efficiency only so long as they continued barefoot. This begs the question whether running barefoot some of the time, or in minimalist shoes, to supplement your training in normal shoes will actually be of any benefit. According to this study, it won’t.