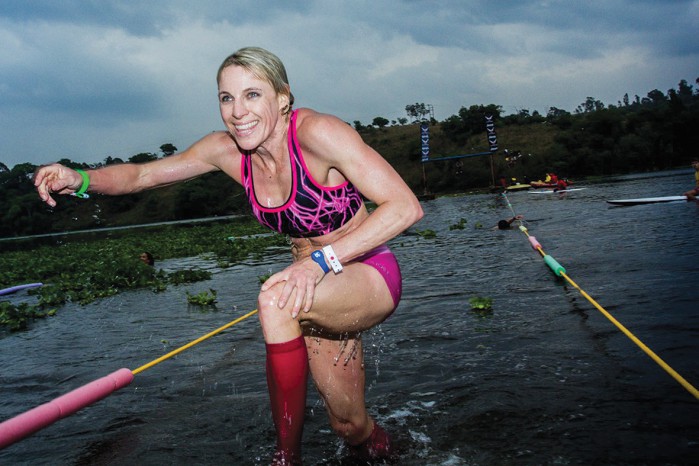 She has become as famous for her racy gear as her results, and she is now even known as Chantel ‘Hotpants’ Nienaber, but she’s no exhibitionist, she’s a genuinely talented athlete who is making the most of her talents and marketability to overcome very challenging circumstances.

The South African team for the upcoming 87km IAU World Ultra Trail Championships in Annecy, France on 30 May was recently announced, and going to her second World Champs will be Chantel Nienaber, the Stellenbosch-based trail running and obstacle racing elite. She actually skipped the recent SA Champs trail race in Mpumalanga and qualified for the team based on her second place in the Cape Town Ultra 100km event late last year, one of the other qualifying races, and there is an interesting and inspirational story behind that choice.

You see, Chantel is the breadwinner for her family, due to her husband Markus suffering from a brain condition that has robbed him of some motor skills, including balance, walking, speech and writing. He can still drive, he coaches Chantel and travels with her to most of her races, but her earnings as a personal trainer and elite-level athlete keep the household going and pay for son Lukas’ schooling, which means that Chantel has to perform a real balancing act when it comes to racing.

That’s why Chantel chose to rather do the Jeep Warrior obstacle race in Johannesburg the same weekend as the SA Trail Champs, and take a chance that her Cape Town Ultra result would be enough to get her into the team. The gamble paid off, too, as she finished third at Warrior and still made the team. “I decided not to run the Champs on Saturday and then do Warrior on the Sunday, because it comes down to Rands and Cents for me. There was R10,000 on the line for the Warrior win, plus points towards qualifying for the national series final and the R100,000 prize purse on offer there, so I made the hard decision,” says Chantel.

Having only taken up obstacle racing in 2013, Chantel has done very well for herself, finishing on the podium in most events, including winning both the Impi and Warrior events in Stellenbosch last October. “I have really worked hard on my upper body strength and my grip, but I normally only do races within driving distance of home, so flying to Joburg for Warrior was quite a departure for me, but just finishing third would pay for my flights, so it was worth it. Also, every time I don’t enter an obstacle race, my opponents get the upper hand on me, because you simply cannot train fully for these events at home. I’ve even gone to a skateboard park to train running up ramps, but you actually need to get out on the course and get to grips with the mud and obstacles. You cannot just pitch up at an obstacle race and expect to win it if you haven’t trained for those conditions and obstacles.”

Chantel came to the fore in trail running when she won the Outeniqua Traverse a few times, broke the course record in the Wild Coast Wild Run, and finished second in 2013 with team partner Kerry Sillifant and first in 2014 with Katya Soggot at the ProNutro AfricanX three-day stage event. She will be defending that title with Katya in April, as part of her build-up to Annecy. “I have to be selective about races I enter, but I am fortunate to get some free entries thanks to sponsors, like ProNutro for the AfricanX. However, I think this also helps me race better, because I am perhaps more driven to chase good results. For example, in January I was doing a race with a R1000 first prize, and I was thinking that my son needed things for school, so I was literally running for stationery money!”

As for the hotpants, Chantel says that has simply become her trademark, her way to stand out from the crowds. “I don’t run around in hotpants all day, that’s just my sporting persona. I have been asked if I am an exhibitionist, and I try to explain where I’m coming from, but not everybody gets it. On the other hand, I have been told by many people that I inspire them, both with my results and with the shape I’m in at 41 years of age, and inspiring others is far more important to me than a few people not approving of my outfit!”