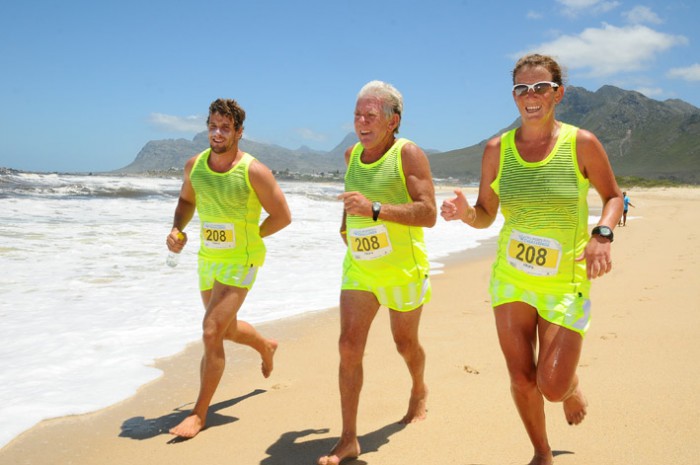 In 1974, when Lood Rabie ran 2:19:22 in his debut marathon at the Peninsula Marathon in Cape Town, he became only the fourth South African to break the 2:20 barrier. Ironically, he had only taken up marathoning because of illness, having contracted glandular fever the previous year and seen his times on the track suffer as a long-term result of all the weight he lost, but now the road became his focus, and launched him on an endurance sport career that continues to this day.

Running in South Africa was a lot more competitive back in the seventies, says 61-year-old Stellenbosch-based medical doctor Lood Rabie with a glint in his eyes. “I can remember one morning I ran up the old Helshoogte Pass just outside Stellenbosch with Danie Malan, and that same evening he broke four minutes for the mile at the Green Point Stadium in Cape Town. We weren’t that focused when it came to training, we just ran, doing 110 to 120 miles a week.” (That’s 180 to 200km a week, for track athletes! – Ed.) “But I believe our results were more luck than science, because we often competed tired due to the hard training we did. Just the other day I was chatting to Ewald Bonzet, and he said if he was competing today, he would train less.”

Born in Grahamstown, Lood’s family moved to Stellenbosch when he was in primary school and he has remained here for much of his life, except for two years in the Air Force, four years working as a GP in the Eastern Cape after his medical studies, and a short stint in Canada. He came back to become an ear, nose and throat specialist and opened his practice in Stellenbosch, where he and his family have made the most of the sporting environment. He is married to Riana, who he has known since childhood, and they have three children, all of whom have done well in sport on top of being academic achievers: Oldest daughter Anel was a top cyclist, second daughter Mari has represented SA in Olympic triathlon, and Lood Junior is currently part of the SA waterpolo team.

Having represented SA in cross-country and been one of the country’s leading marathoners throughout the 70s, Lood was later sidelined by a calf problem – but that opened a new sporting door for him. “A friend recommended that I take up cycling, and the next step was duathlon, which in turn was followed by triathlon. So there I was, learning to swim competitively at the age of 39!” No surprise, though, that Lood went on to represent SA at various age category Tri World Champs around the world, often finishing in the top five in his category, and also finishing third in the 55-59 age group at the XTERRA World Champs in Hawaii in 2012.

He also took up competitive mountain biking, most often teaming up with younger brother Chris, and to date has completed the Cape Epic five times, the Sani2c six times, and the Wines2Whales five times, plus the Trans-Alps and the Trans-Andes overseas. Another goal was to do his first Ironman when he was 60, and he also took up canoeing and surfski racing just before his 60th. He has now has done the Breede River and Fish River races twice each, regularly takes part in the Surfski Series, and is busy training for the arduous 250km Port Elizabeth to East London surfki race – and he still finds time to sail yachts competitively as well!

“When it comes to time management, I believe that the morning training session is the key. I’ll do an afternoon session if work allows, but living close to work means my travel time each day is usually only about five minutes, or 15 minutes on a bad day, and that gives me an extra hour per day for training. I just want to stay healthy, so I will keep running, cycling, swimming and paddling as long as my legs and heart allow.”