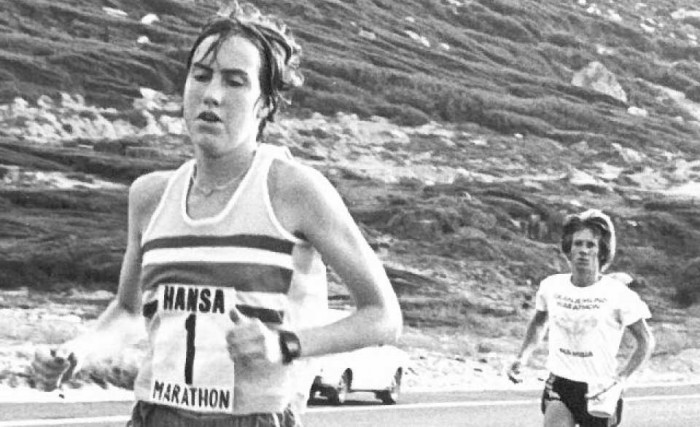 This year marked the 35th anniversary of the first sub-three-hour marathon by a woman in Africa – run by then 22-year-old South African Clare Davie. In the span of just over a year, Clare slashed 13:07 off the SA record in four races, and today remains an active sportswoman.

In 1979, Clare’s “plotting and scheming” after her 10:41 finish at the 1978 Comrades Marathon paid off when she clocked 3:01:32 at the Johannesburg Marathon that February, shattering the SA record of 3:05:02 that was set in 1974 by 15-year-old Suzanne Gaylard. A month later, she went still faster at the Interprovincial Marathon in East London, clocking 2:57:26 to become the first ever South African woman to break three hours. It was also the first sub-3:00 by a woman on the African continent.

“After Comrades, I joined Ivor Lazerson’s running group and worked on my speed, and I added golf course runs and hills,” explains Clare, now 57 and living in Johannesburg. “It was a special day in East London, because whatever level you’re on, a PB is a PB… but you always think you have a better time in you.” And that she did, because later that year, in September’s Stellenbosch Marathon, she lowered the record to 2:56:28, then chopped off a few more minutes the following March at the Peninsula Marathon, where she finished with a personal best and fourth and final national record of 2:51:55.

FROM POOL TO ROAD

Clare actually started her sporting career in the pool. In 1975 she placed third in the 800m freestyle at the SA Nationals, also competing in the 400m, but ironically, it was in the pool that her running career was kick-started, “George Jacobson, a 200m butterfly Springbok, told me that we were ‘Hot for Comrades’,” says Clare. So, after buying a pair of Tiger Onitsuka running shoes at a Men’s Outfitter – there weren’t any women’s running shoes on the market back then – and getting a running vest made to her size by a member of Rockies who owned a tie factory, Clare sewed the Rockies colours on herself and hit the road.

“We ran on our own during the week and joined Rockies for their Sunday run. By 1977, we were ready for a marathon, so off we went to run the Potch to Stilfontein Marathon, and that’s where it all began…” Her first sub-3:00 came at a time when she had just completed her B.Com and had signed articles with Alex Aiken & Carter (today’s KPMG), working to become a chartered accountant, so she had to dedicate mornings before work and lectures to train, or time after work. “The Board Exams were in May 1979, and I did the sub-3:00 in March. We got some leave, but two years working part-time while also training was difficult!” Somehow, she still managed to run four SA marathon records, and also ran the Sea of Galilee Marathon in Israel in late 1978, as well as the Avon Women’s Marathon in London and the Nike Oregon Marathon in the USA in 1981.


During the 70’s, the Masters Swimming Programme took off around the world, which Clare later joined, and this year she swam her 20th SA Masters Event. “I went as hard as I could for as long as I could. Up to my early 50’s, I would love to do endurance sets, say 20x200m, and grind my training partners to fatigue!” That saw her Masters Swimming career hit a high point in 2012 when she clinched the 200m backstroke gold medal at the World Masters in Italy in the 55-59 age category. However, her competitive days came to an end when doctors recommended she slow her heart rate.

“Now my swimming is social. I’ve changed focus and concentrate on technique, swim open water with anyone I can find, and I watch my heart rate in the gym.” Still, she hasn’t hung up her goggles completely – just last month she took on the Dolphin Mile in Durban alongside Comrades legend Helen Lucre. “I still get up to train in the mornings, six days a week, and if I was 30 years younger, there would be more events to do, but I’m quite happy to be acting my age.”

Today, Clare is retired from the SA Institute of Accountants but maintains her interest in income tax legislation, and she’s actively involved in organising swimming events, notably the annual Dis-Chem Sun City Swim. She says it’s all about living the lifestyle. “In my twenties, most of my friends were partying while I was marathon training, and I’m happy to still be fit and active today. My poor husband… he ran Comrades the year I was pregnant with our daughter, Stacy, and I managed to get him to swim a couple of Midmar Mile events, paddle down the Orange River last Easter and Ski in Italy in December,” she laughs.