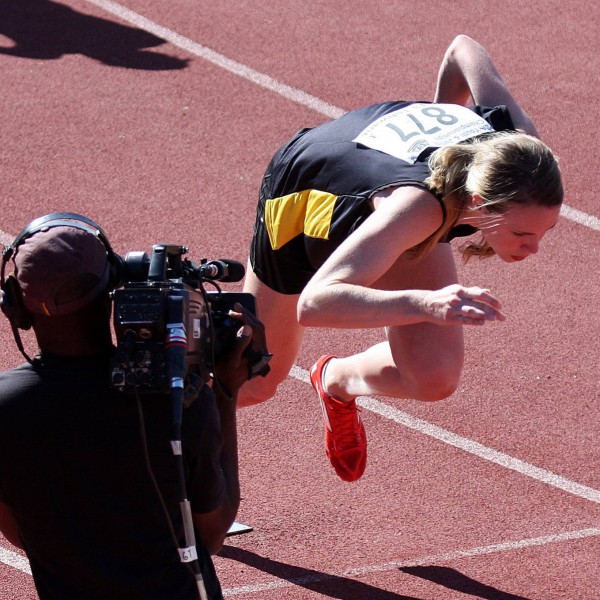 Sprinter Justine Palframan holds two SA records for the 400m and has been representing South Africa on the world stage since 2009, including the World Champs in Moscow last year, so keep an eye out for her this year at the Commonwealth Games. – BY SEAN FALCONER

They say the 400m sprint is one of the toughest events on the track. For the first 300m it is all about speed, but in the last 100m the body starts shutting down and the winner will be the athlete who can hold on the longest before collapsing. According to Justine Palframan, this is so true. “You can hit the wall and it feels like you’re walking, just hoping to get to the end. It’s surprising that 400m athletes don’t just lie around on the track when they finish – we still have to try walk off and go die somewhere else!” she laughs.

One thing that is certainly not dying is Justine’s budding athletic career. Now studying B.Sc. Sports Science in Stellenbosch, the 20-year-old sprinter from Eshowe in KwaZulu-Natal has steadily been establishing herself on the international stage. She was selected for the 2009 World Youth Champs in Italy, finishing fourth in the 400m and ninth in the 200m, and brought home a silver in the 400m from the African Junior Champs. The following year she went to the World Junior Champs in Canada, even though still a youth athlete, and made the semi-finals of the 200m. Then in 2012 she was back at the World Juniors and finished fifth in the 400m, breaking the SA Junior record to go with her SA Youth record set in Swaziland.

RUSSIAN DOUBLE
In 2013 Justine enjoyed her biggest year yet, with two trips for global championship meets in Russia within a few months of each other. First she went to Kazan for the World Student Games, where she helped the SA 4x400m relay team bring home bronze, and then she was sent to the senior World Champs in Moscow. “Kazan was a great experience, with an amazing athlete village, great food, friendly people, an awesome track and everything nicely organised. Moscow was horrible, by comparison, because our hotel smelt of sewerage, the bed springs were sticking out and the hotel food was not great. We ate the same plain pasta and meat every day – until the last day, when suddenly they brought out pizza and wraps!”

In contrast, Justine really enjoyed competing in Moscow, even though she only appeared in the first round of heats. “I was really nervous at first, but as I stepped onto the track, I decided I’m here now, so I may as well enjoy myself and just try to do my best. I did my warm-up right next to multiple Olympic and World Champion Allyson Felix of the USA, and I found that the top girls are not that much taller than me. On TV they look huge! And when I looked at the times, I realised it is possible for me to get into the later rounds at that level, now that I have more experience. It’s not just a mad dream.”

SPEEDY FAMILY
Justine’s speed on the track is very much a family trait. Dad Stephen was a 400m and 800m athlete in his younger days, while Mom Trevlyn was also a sprinter – and they actually met on the track. Older sister Catlyn does the 100m and 200m sprint combination, while younger brother David is specialising in the 400m. Stephen is an accountant by trade, but doubled up as Justine’s coach for most of her high school years, with occasional help from then Durban-based coach Mohamed Allie, who subsequently moved to the Cape to head up the Maties Athletics Club at Stellenbosch University. Hence Justine decided to go study at Maties in 2013, so that she could be coached by him. And now that long-time boyfriend Cameron has returned from a Rotary Exchange year in France and moved down to Stellenbosch to study as well, she has even more support at hand.

Looking ahead, Justine has her plans for 2014 laid out already. “I’ve got the African Senior Champs coming up, then the Commonwealth Games, and in between I’ll also go run a few meets in Europe. Then next year it will be the World Champs again.” This means she has to juggle her studies a bit, but she says her lecturers are very understanding and helpful. “I managed okay last year, despite all the training and travelling, and only failed one subject, so I just have to work hard and maybe get some extra lessons this year. The lecturers don’t mind moving a test date or giving extra lessons here and there, which means I can focus on my athletics.”