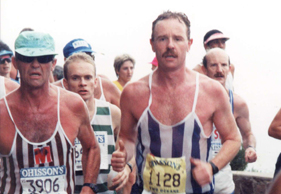 Dave
Macready takes advantage of every gap in his busy schedule to still fit in
plenty of exercise: “I am usually up early and like to train at odd hours, and
when I travel, I can exercise in the morning before work, because I can be
selfish with my time when away from my family. In Joburg, I live in a hotel
opposite the Nedbank offices, so I leave a sport bag there with all my kit, and
I always travel with running shoes, as it’s the best thing to get lost on the
run in a new city!”

On Mondays
and Fridays, when at home in Cape Town, he regularly cycles to work, either doing
a 23km mountain bike ride from Constantia to the Waterfront along the slopes of
Table Mountain, or going by road via Hout Bay for a 34km commute. “It’s a
privilege to be healthy and experiencing such beauty,” says Dave. “It keeps one
sane and takes away stress, because you can’t work at this level unless you
have some sort of exercise.”

Dave (54) is
married to Debi and they have three daughters, Leigh (25), Carey (22) and Skye
(9). He was born in the Transkei and studied at UCT, qualifying as a chartered
accountant before heading to the UK for 10 years, where he became a partner in
Deloittes. In 1990 he returned to SA and joined the Nedbank Group, a career
move he describes as his best decision yet. “The most enjoyable part of my
career has been at Nedbank, as part of the executive team that runs the group. I
love that Nedbank is a value-based company, seriously focused on making things
happen for our clients, and pursuing its position as a green bank.”

“Also, I am
very proud of our investment in social endurance sport, like road running and
cycling. Nedbank sponsors the Sani2C and Tour de Tuli events, and is a big
supporter of the Cape Argus Pick n Pay Cycle Tour, so everything we do goes
back into the sporting communities. Nedbank is also the biggest corporate
participant in the Cycle Tour – we have our own start time, with over 1200
clients and staff in Nedbank kit lining up together, including over 160
youngsters from disadvantaged communities who are sponsored with bikes and kit
as part of our Nedbank Sports Development Cycling Programme. Our focus now is
on the developmental side, because it’s a big thing for our clients, who love
to ride their bikes. Also, we recently contributed to the South African
Institute for Drug-Free Sport (SAIDS) to help fight doping in all sports.”

Dave played
mainly team sports at school, but also achieved provincial colours in swimming
before getting into running at varsity and doing his first Two Oceans and Comrades
ultras in 1985. He went on to earn four bronze medals at the Big C, posting a
best time of 10:09:30, and finished the Two Oceans 10 times from 1985 to 1995
to earn the permanent number 919. “I was determined to get a Blue Number under
1000, then I retired from the long ones because I was really struggling with
Achilles Tendonitis. I eventually had both scraped, and after that I became
bullet-proof, so in 2001 I ran one more Oceans – just to prove I could still do
it. The beauty of endurance sport is that you compete against yourself and determine
your own level. You can draw the line where you want.”

He
subsequently moved into triathlon and cycling, going on to finish the
SpecSavers Ironman SA once as well as earning four medals at the 70.3 Half
Ironman, riding the ABSA Cape Epic four times as well as many other bike races,
including the TransAlps in Europe, and also finishing eighth in the SA Masters
Champs in 2012. “I could already swim, so triathlon was a natural fit, and I
found I had a talent for cycling. I still run a few half marathons each year,
but I have become reasonably competitive in cycling, and it gives me the exact
same high as running, but with less strain on my body as I get older.”

“Health and
fitness means everything to me in my present work situation as well as personal
life. It enables one to think, get perspective, get clarity of thought, and de-stress
completely. Yes, I have to manage my diary around my work commitments and
travel in order to exercise, but if you plan in advance, you can always fit in
training. And best of all, my family comes with me to all my big events. The
day they stop supporting me is the day I stop doing them.”