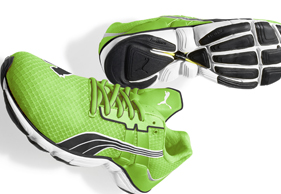 In
February the invite arrived and I was soon jetting off to the Big Apple for
PUMA’s Nature of Performance launch, where we were shown the new Mobium Elite
shoe as well as the ACTV
and RCVR compression tights, the statement pieces within PUMA’s new Nature of
Performance range. After prodding and poking the products, speaking to the
designers, and taking the shoes and tights for a few ‘test drives,’ here’s what
I think of them.

The minimalist trend in running shoe design has
seen manufacturers cutting down their designs to the ‘bare minimum’ of midsole
rubber in order to let the foot run naturally, with maximum flexibility. While
this is widely recognised to be ‘good’ for our feet, promoting more efficient
running ‘up’ on the midfoot instead of heel-striking, it has also,
unfortunately, resulted in an increase in common overuse injuries, because our
feet simply are not used to working so hard after all the years of more rigid,
traditional shoe design. For that reason, several manufacturers are now looking
to combine more traditional cushioning and energy-return with minimalist
flexibility and promotion of forefoot-running.

That’s where PUMA’s new Adaptive Running
category of shoes comes in, starting with the Mobium Elite, a lightweight
neutral racer-trainer. It is designed to expand, contract and adapt as the foot
moves in three directions – longitudinally, laterally and vertically – to encourage
a more natural and efficient midfoot strike. To do this, the midsole has deep
flex grooves in the forefoot and arch, creating Expansion Pods that promote
flexibility and ‘spreading’ of the shoe for that free feeling of a minimalist
shoe, but still with great cushioning, and a sculpted arch that moves with the
foot as it transitions forwards. The PUMA designers took their inspiration from
one of the most efficient runners in the animal kingdom, the cat, when
designing these pods, like pads on a cat’s paw, which expand to provide
cushioning on landing and compress together during the propulsion phase.

However, the Mobium’s most notable feature is
the figure-of-eight Mobium Band running through the midsole (and visible under
the arch), which could effectively be described as a bungee cord connecting the
heel and forefoot, and is designed to enhance the foot’s natural spring, like
the tendons in the foot. When you run in the shoe, you really feel this springiness.
Put it together with the cushioning and flexibility, and you have a really
sweet ride: Great heel cushioning (if you are a heel-striker), super light,
responsive feeling on your feet, springiness in the forefoot that makes you
want to bound forward… You just want to go faster!

PUMA believes the Mobium will “change the paradigm in the category of
performance running.” Personally, I don’t think the Mobium is so far removed
from what other manufacturers are trying to do as well, in principle, but I do salute
their innovative approach to getting there, and I think this is a really great
shoe. Plus I love the neon green colouring. PUMA will be releasing additional
models in the range in coming months, including women-specific styles.

Most of us are familiar with the medical
taping used nowadays to help athletes treat injury or niggles, with the tape
wrapping and supporting the targeted muscles and maintaining correct alignment,
thus alleviating the strain on the muscles. Also, we have compression garments
that are designed to provide gradiated compression to force blood back up to
the heart quicker, so that it can be re-oxygenated and then returned to the
muscles, thus making your muscles work that much more efficiently. Compression
apparel has also been shown to reduce muscle vibration, which contributes to
the natural damage done to muscles during strenuous activity, and thus promotes
faster recovery.

So logically, it makes sense to put the two
together – taping and compression – and that’s what PUMA’s latest range of training
tights, shorts and tops does, with silicone tape built directly into the
garments to allow the garments to work with the body and help to maximise
muscle power, efficiency and recovery. The first two items in the range
launched in New York are the ACTV and RCVR training tights. The funky names are shortened versions of Active
and Recovery, and both pairs are categorised as Advanced Compression garments,
offering the highest level of compression in PUMA’s Performance Bodywear range.

In the ACTV, elasticised silicone tape is
strategically placed on the inside of the garments in three basically parallel
lines running down the front of the leg, with a rounded opening around the
kneecap, and two lines running down the outer lines of the hamstring and calf
muscles at the back. The RCVR, by contrast, has a wavy pattern of taping lines
in front and back that provide still more support, even though the tights are
lighter and a bit thinner than the ACTV. The reasoning here is that the ACTV is
designed for use while you are running, when your muscles need more room to
flex while still getting that compression and support, while the RCVR is
designed for use post-run, when your muscles need more overall support, with
less room needed for expansion and flexing.

Both pairs of tights feature PUMA’s dryCELL
moisture-management technology to keep you dry and comfortable, while the ACTV
also features a mesh panel on the back waistline for extra ventilation, zipped
pocket for keys and zipped legs to help you get into them easier. Which is a
crucial part of the operation, because that tape on the inner leggings is
really sticky… and if you have hairy legs, be warned that it can pull a wee
bit.

The secret is to scrunch up the tights and get
your foot through the ankle opening, then roll them up your legs, and
vice-versa to take them off. Otherwise, it can feel a bit like pulling a
plaster off. Also, be careful to get the line-up right, as adjusting them once
on can be tricky. But this is a minor consideration, given the great comfort
and feel of the tights once on. There was no pulling, creeping or sagging when
I ran in the ACTV, as the tape really clung to the spot I had put it, so to
say, and I appreciated the slightly more pronounced lower leg compression of
the RCVR – where it matters most for recovery – due to there not being zips in
the ankles.

While this shoe was not launched in New York,
PUMA sent me a pair to test once I got back to South Africa. It has an eye-catching
design, to say the least, with that spider web-like upper. Based on the
principals of the spider web, the upper consists of mesh wrapped in a web-like
structure, known as the WebCage, which has a somewhat ‘plasticky’ feeling
compared to most running shoes I have tested, but I soon got used to that.

Unlike the PUMA Faas line, which
emphasises lightweight cushioning and forefoot flexibility, the BioWeb offers a
stiffer ride with plenty of structure and stability, and most of that support
is in the rearfoot. This is largely thanks to the various WebTech heel-wrap and
midsole inserts, a very structured and semi-rigid design that you can feel when
you wear the shoes. Not in a bad way, mind you – if you are looking for that
highly supportive feeling, you’ll like these shoes, and runners with narrow
heels may welcome a fit that protects against heel slippage.

I believe these shoes would make a
good trainer for heavier runners who need more structured support, especially
later in a run when their muscles tire and pronation may become more
pronounced. It is not an anti-pronation shoe, but will offer more stability
than other neutral models. It could also make a great cross-training shoe, especially
in the gym when doing weights.

Now that you’re read about these great new PUMA
products, here’s where you’ll find them.

?
Bioweb Elite: R1 299 at PUMA stores and a variety of independent retailers,
including Totalsports, Sportsmans Warehouse and Cross Trainer.