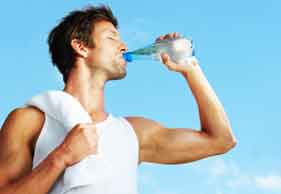 Growing up, many of us were regularly told to drink eight glasses of water a day, because it was supposedly bad for us, even dangerous, to become dehydrated. As athletes, we were then told to work out our sweat rate by weighing ourselves before and after a hard session, and then drink exactly the same amount of liquid to replace what we calculate we lose. Added to that, the sport drink companies, particularly in the USA, promoted the message that we needed to drink more and more to avoid dehydration at all costs, especially their products… and the result of all this was that many an athlete finished a long distance event, particularly marathons and ultra-marathons in hot conditions, having drunk way too much water – which not only impaired their physical performance, but put them in serious medical trouble!

You see, when water is absorbed into the bloodstream from the digestive tract, electrolytes in the blood are diluted, especially sodium (salt), which you are already losing through sweating, hence feeling all salty when the sweat dries on your skin. The condition where the blood sodium levels became dangerously diluted is known as hyponatremia. Exercise-associated hyponatremia (EAS) isn’t a rampant problem, but it’s far more common than symptoms of dehydration, especially in all-day events like the Comrades Marathon, particularly amongst the slower back-markers, and even mild forms will make you very uncomfortable.

Also, by a process known as osmosis, water moves from the bloodstream into the cells. When one is dehydrated, this shift will correct any water deficit, so drinking from that perspective is a good thing. However, if you drink water when already well hydrated, this shift can lead to cellular swelling, including swelling of the brain (hyponatremia encephalopathy), which in turn can lead to headaches, dizziness, nausea and stomach problems, and in worst case scenarios, even bursting of cells, seizure, coma and death.

That’s why severe overhydration is also known as water intoxication, where good old water, the very thing we rely on for life, can actually become toxic and dangerous to your health. Fortunately, your kidneys normally filter out excess water and it is eliminated by urinating, but if you drink large quantities of water in a relatively short amount of time – like chugging down a litre of water at every water table during a marathon – the kidneys reach a point where they can no longer filter out so much water quickly enough to prevent cellular swelling.

THE SOLUTION
Now before you throw your water bottle away, understand that nobody is saying you should avoid drinking water! It is still important to stay hydrated, but research has shown that drinking based on your thirst is the best guideline, and that thirst will actually protect you from the hazards of both over- and under-drinking by providing essential feedback on your internal fluid balance.

Yes, by all means drink small amounts regularly during a long event in order to prevent dehydration, but do not follow a strict quota system for drinking fluids and end up over-drinking. In other words, if you are not thirsty, you should not feel compelled to drink at every water table in a race. Yes, if it’s very hot, you should drink more, but your body will tell you this through thirst. So the rule of thumb to follow is very simple: Drink as you feel by listening to your body.