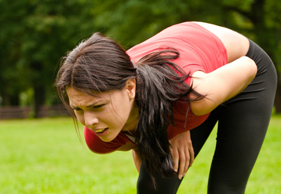 For many years, it was believed that
cramping was caused by heat, dehydration, or a lack of salt and minerals in the
body, but study after study has ruled out all of these factors. “Although the
idea that mineral deficiencies and dehydration can cause cramps have been
popular, we have done many, many studies that do not prove these as causes for
cramps during exercise,” says Dr Martin Schwellnus of the Department of Human
Biology at the University of Cape Town, who is considered one of the world’s
leading researchers in this field. Instead, the growing research on cramps points
to muscle fatigue and failure in the neural communication pathways of the
muscles as the cause of cramping.

As an athlete, you train a muscle to
contract so that you can run, but this fatigues the muscle. It then begins to ‘short-circuit’
and stays contracted when it shouldn’t, causing a cramp. “The mechanism for
muscle fatigue and muscle damage causing cramping is best explained through an
imbalance that develops in the nervous system control of muscle. Muscles tend
to become very twitchy when they become fatigued or are injured,” says Dr
Schwellnus.

So what this means is that to stop
cramps you just need to get fitter before racing… but that’s not going to help
you much when a cramp stops you midway through a race. If that happens, there
is only one thing you can do: Stop and stretch! Static stretching, in effect,
breaks the cramp, and once you achieve that, you must start slowly and
gradually build up your speed again. (And eating a banana to break a cramp is
just an urban legend!)

Then, after the race, adapt some of
your training runs so that they are done at the same pace you intend racing,
including accelerating in the second half of the run and throwing in that fast
finishing effort that many of us inevitably put in at races. You may still get
some cramps, but you’ll be fitter, faster and better prepared to race – and
besides, cramping in training is much better than cramping in a race!