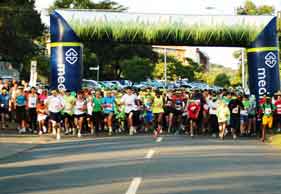 Mention Harlequins and many a runner will think of the Medihelp Sunrise Monster held every March, in which runners take on massive hills while running alongside the zebra and buck in Groenkloof Nature Reserve. This on-road, off-road 32km event (plus Mini Monster 10km and Baby Monster 5km) has exploded in size in recent years and has been dubbed “the ultimate Comrades conditioner” by the running community. As they say, take on the monster – if you’re tough enough! “Although the off-road section is not everyone’s cup of tea, we won’t remove it from the route as it is also widely acclaimed by many participants as a characteristic feature of the race,” says Harlequins chairman and race organiser Geoff Hesse, who has been involved in organising the race for more than 25 years.

IN THE BEGINNING
This is a club with a colourful history – literally! A Harlequins runner is easily identified by the iconic multi-quadrant club colours synonymous with the Harlequins parent club founded in Pretoria in 1903. At first it may appear that the colours were thrown together by a confused committee who compromised in order to keep the peace, but the Groenkloof-based club were actually the first club outside of Britain to be granted permission by the famed London Harlequins to replicate their strip outside of Twickenham – on condition that one of the quadrant colours had to be modified. The local club decided to replace the original chocolate square with a russet alternative, and the rest, as they say, is history.

The club’s running sub-section was founded in July 1977, soon after the start of the global running boom, and was one of the first open clubs formed in the city, with Ed Ward being elected as Chairman and the former Northern Transvaal rugby player Jacey Strauss as one of the founder members. Current Treasurer Ivan Lazarus joined the club soon thereafter and has held the purse strings ever since. The club currently has 80 members and new membership is being sought from existing runners and new entrants to the sport.

THE BALANCE
“The character of the club is one where the balance of competitive sporting participation, camaraderie and social participation is accommodated in a spirit of fostering encouragement to all members,” says Geoff, who describes the club as sociable and family-orientated with a jovial bunch of members who often get together for club functions. One of the major highlights of the year is the annual “Away-weekend” trip organised by the committee. Usuaully, a road race in one of the neighbouring provinces is selected and the club then sponsors members and their families to get away and enjoy some time in the wild!

Apart from the weekly runs and events, the club hosts a weekly 6.6km time trial on Thursday nights and the course record of 20 minutes 16 seconds by the well-known star of the 80’s, Johan Fourie, is yet to be threatened! A club night is held after the time trial on the last Thursday of every month, often with a guest speaker present, and a complimentary meal and drinks provided at the clubhouse. An annual awards dinner function is also held to recognise the efforts and performances of the members throughout the previous year. “This includes recognition of runners who are not necessarily event winners,” says Club Captain Tracy Reddy, “but those who have participated regularly and have held the Harlequin flag high in the sporting community.”

HARLEQUIN STARS
Over the years well known runners and even ultra-marathon winners like Helen Lucre and the late Andrew Greyling have run in Harlequin colours. However, not all members are focussed on ultra-distances, and there are as many Harriers who prefer running shorter distances on a regular basis, with regular podium finishers Belinda Hickman, Debbie Bredenkamp and Rene Hawkridge coming to mind. Harlequins is also well represented in Masters track and field meetings by Tobie de Vos, who has both provincial and national colours in sprints and javelin.

Harlequins might be a small group but a group that prioritises fun and inclusion of every type of runner! “New members are always welcome!” says Geoff. “Everyone is encouraged to visit the club or join in at the Harlequin gazebo at races to experience the vibe and meet the family!”