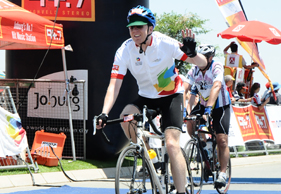 About five years ago, my wife Sharon and
I, who were already bitten by the running bug, decided to give the 94.7 Cycle
Challenge a go. There were a few reasons: Firstly, the finish was near our
house and all the roads were blocked off, so we decided if we can’t beat them,
let’s join them. Secondly, I was challenged to cycle by a ‘real’ cyclist, since
I always said that a runner can cycle but a cyclist cannot run without serious
training. Thirdly, I thought as a Comrades runner, if I can run 90km, I am sure
I can cycle it! So, we have been cycling the 94.7 for the last few years, and
the training has become less and less. This year our training amounted to
cycling the 8km to the start from home!

As the race started it took me a few
kays to work out my bike’s gearing again, but the cycle along the M1-Highway
was a fantastic feeling. There were some tough hills to negotiate as we entered
the Johannesburg CBD via Joe Slovo Drive, but I really enjoyed cycling over the
Nelson Mandela Bridge, a perfect photo opportunity. The route on Jan Smuts
Avenue had some really fast bits where I ‘chickened out’ when I got to 65km/h, because
in a race of this magnitude there are some novices who battle to hold their
line down a hill.

Cycling through Craighall Park and past
the start of the RAC 32km Tough One reminded me what lay ahead the following
weekend. As we went past Diepkloof, the last hills awaited us. But the dangers
of cycling are many, as I saw an accident. It looked like a motorbike had hit
some cyclists. It looked serious and reminded me why I don’t cycle on our roads
if there is not complete road closure. I took on the last 10km with gusto, up
the tough hills where I spent most of my time standing up in the saddle and
using my ‘running muscles.’

I finished at the picturesque Waterfall
Estate in 3:31 and still felt strong. I waited for Sharon, who started after me,
and she came in an hour after me, quite tired as she cycled in the heat of the
day. We both felt it was a truly fantastic event. Thank you to the organiser
and sponsors for putting on a world class event. And as
we cycled home, I started thinking of the Tough One the following weekend… and
trying to earn my medal for doing both events.

TACKLING THE TOUGH ONE

This year was my ninth Tough One, and I
still think of myself as an amateur when I see people running their 30th! It
just shows that this race has a long history. I had been training hard in the last few
months and also racing hard in November, so I was a little anxious about whether
I should aim for the silver time of sub-2:30. My previous best time was 2:42, but
that was on the old course, which was slightly easier, so it would be a huge
ask to improve by so much on the new and tougher course. Still, I decided on
the morning of the race to go for it!

The first hills went off without
incident, but as we started running down Malibongwe Drive, I felt a tightening
in my left calf. It got worse on every downhill, so I decided to coast on the
downs and push the uphills. I could see my average target pace of 4:39 per kay
slipping away on the downhills, which was disheartening, but I pushed to the
finish in a time of 2:33. I was disappointed to not break 2:30, but pleased
with a new best time for the Tough One. I also got my medal for doing both the
94.7 Cycle Challenge and the Tough One. I tried to break six hours in total for
both races, but in the end missed it by four minutes. Thank you to RAC and its
sponsors for putting on a memorable race. I look forward to next year’s race!