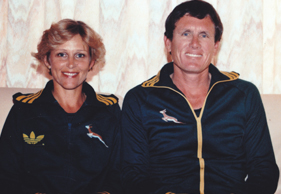 Being a top athlete in South Africa
in the 70s and 80s had its highs and lows. It was a time of world class
athletics, performing to stadiums packed with thousands of spectators, and two
of the best on the track were married couple Sarina and Danie Cronje. Between
1979 and 1981 she set South African records in the 800m, 1000m, 1500m, mile and
3000m, and ran the fastest 10km on the road in 1980, while Danie was awarded
his Springbok colours in 1981 for the 3000m steeplechase after he ran the then
second-fastest time ever by a South African. The disappointing part of their
success was that they were never able to compete on the international stage,
despite their times being more than good enough to qualify for most
international meets, because South Africa was suspended from international competition
due to its apartheid laws.

“There are many days that I sit and
wonder what we could have achieved if we were allowed to compete internationally,”
says a wistful Sarina, and this borne out by the fact their running times still
compare favourably to those run by the current top South African athletes. Some
of Sarina’s records remained unbeaten for eight to 10 years, and her best times
still rank in the top five of all time in SA in some distances, and nearly as
high in the rest. Danie, meanwhile, is still ranked eighth in his favourite
event. “At that stage we were not aware on what we were missing out on,” says
Sarina. “My coach, De Villiers Lambrecht, used to tell me what times I should
be making on each distance and I was pretty good at reaching them. Now, when I
see where these international race meetings are held, I realise how much we
missed out on. I think the athletes in the era between the 70s and 90s can be
called the ‘disadvantaged athletes.’’’

Sarina’s interest in athletics began
in primary school. By grade 7 she had won her first cross-country event, and
when she began high school she surprised everyone, notably the older girls that
she beat, when she had to race against the senior girls because there were no middle
distance events for girls between the ages of 14 and 15. In 1971 she won the
South African under-16 title in the 400m and that was when she decided she was
going to give athletics everything she had. “I really enjoyed running – the further,
the better. There is nothing more exhilarating than being fit and floating
through your 1500m and 3000m distances.”

Danie’s athletics career started a
bit later in school, thanks to an injury early in matric. An avid rugby player
and sporty person by nature, he had broken his arm in a rugby match, and being
unable to play, he found solace in running. Danie ended up packing away his
rugby togs for good, having become addicted to athletics, specifically the
3000m steeplechase.

The two aspiring athletes’ paths
crossed when they both started training with coach De Villiers Lambrecht’s
training group in 1977. By early 1979 they were engaged and got married in
Bloemfontein that July. “We understood and could motivate each other, as we had
the same goals,” says Danie. Sarina adds that “Danie could often predict my
race times, as he would monitor my training. It was definitely an advantage
having my partner in the same industry as what I was in. When a person is
serious about achieving success, you need to plan your whole day, month and
year around your training. Between 1977 and 1981 I managed to run my best times,
and Danie managed to get his Springbok colours in his favourite event, the
3000m steeplechase, with a time of 8:27:62.”

Danie and Sarina’s outlook on the
South African athletics scene of today is that efficient marketing tactics need
to be set in place in order for it to grow and thrive. “Athletics meetings in
South Africa need to be televised live on television, highlighting selected
events as well as our elite athletes. Newspapers scarcely publish anything
about athletics anymore, while the public isn’t aware of what our athletes in
South Africa are capable of. We need to have more organised meetings and
showcase our talented athletes to the public,” they say.

The couple are also outspoken about
the standard of meets: “Some of the events are so badly organised and it has
created a bad reputation for the athletics industry. There are too many
inexperienced people in charge of our sport at the moment and it needs to
change in order for athletics to grow. Our top athletes need more support, and
we need an improved budget for the development of the sport.”

Both describe athletics in their heyday
as “near perfect,” excluding the fact that they couldn’t compete on the world
stage. “Today our athletes can compete internationally, yet the circumstances
regarding the sport in this country are not ideal. In my senior athletics
career, we participated in many sponsored invitational events, which attracted
thousands of spectators due to excellent administration and organisational
skills. We need to try bring athletics back to that point in our country,” says
Sarina.

The couple have three sons, Johan,
Hendrik and Danie Jnr, and say they believe in bringing kids up in a sporty
environment: “It keeps their bodies healthy and helps them through the emotions
that a young person tends to deal with,” says Sarina, and Danie adds, “You can
create the environment for them, but not pressure them to take part if they
don’t want to.” Well, all three inherited their parents’ athletic genes, with
Johan going all the way to the Olympic 1500m in Athens, Greece in 2004. “When
Johan was selected, we were ecstatic,” says Danie. “The fact that I could go to
the Olympics with my child and support him was a bit of compensation for the
fact that I could never compete at that level. It was an amazing experience
which I am so grateful for.”

Danie and Sarina, both now 57, are
still involved in athletics today. She is the sports manager at the University
of the Free State and coaches athletics there, while Danie now farms full-time
with cattle, going out to their farm in Winburg two to three times a week, but also
assisting Sarina with coaching triathletes and duathletes in his spare time. They
are also both still active athletes. In 2011 Danie won the South African
Cross-country title in the 50-55 age category, and in both 2010 and 2011 he finished
third at the South African Duathlon Champs. Sarina says she tries to run twice
a week and also keep fit by cycling, even though sometimes her knees don’t want
to cooperate. “I will never stop training. It is similar to an addiction, a way
of life for me. By 4pm I start feeling restless… that’s when I know I need to
get out on the road.”

Modern Athlete asked Sarina why she thinks female athletes achieved better times in
her era than they do today.

Today’s youth are less active at
school. We walked to school, we cycled and played outside. The situation in our
country today is so that kids can’t walk or cycle to school. Many kids also
spend most of each day in front of the television and on social networks. Therefore,
they spend less time outside and are less active. In ‘our time,’ the kids,
especially the girls, were just more active. Also, there is no longer a
physical education period in school, and another issue is that there isn’t, as
such, ‘summer sport’ and ‘winter sport’ at schools anymore. We used to have
athletics and cricket in the first term of the school year, the second and
third term was for rugby, netball and hockey, and then in the fourth term
athletics again. Because athletics is a very demanding and individual sport,
kids now rather stick to team sports where they can be more social with less
physical demands.

Girls at the age of 12 and 14
sometimes also get pressurised into achieving too much, too soon. When they hit
puberty, things tend to happen to their bodies that make running a lot more
uncomfortable, and that’s when they then become demotivated and lose interest.
This is how we lose many talented girls in the sport, whereas if the girls are
just motivated and supported through this time, they will be able to achieve
high standards again. Also, we only started competing a lot later back in my
day, so the fact that they start so early puts too much pressure on them.