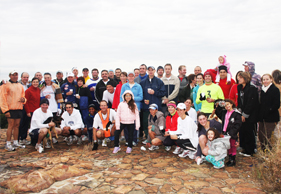 Joining BCC is like becoming part of a huge family – there is always
someone to chat to, always someone on hand with advice, and always someone
around who guides and cares. However, the best part of the club has to be the
great balance between its professional approach to races and running, and its
social vibe that has seen many members form lifelong friendships. And no matter
what sporting discipline you prefer, you will be able to find your niche within
the BCC club structure.

HOW IT ALL STARTED

BCC (or
Kensington Polytechnic as it was formerly known) was founded in 1925 and went
through some name changes, until in the mid-70s it was decided to call it
Bedfordview Country Club. It started as a multi-faceted sports club catering
for 12 different sports, but running was not one of them. Then one evening during
the Running Boom years, after soccer/hockey training, while cooling off with a
cold beer, the question was asked, “Why don’t we start a running section at the
club?” This led to the athletics section being established in September 1978.

Today the club has just over 300 members and a close
affiliation with Virgin Active, though the memberships are entirely separate. However,
club members feel privileged to have the Virgin Active facilities available on
the club grounds.

BCC’s primary focus now is its athletics section, which
continues to flourish and boasts a healthy cross-section in terms of running
strengths and abilities. The running does tend to be more intense during the
first half of the year, when races like Two Oceans and Comrades are some of the
bigger goals, but all other goals are catered for.

Regular morning runs from the club grounds keep
members motivated, while a host of other social activities include a monthly
‘Takkie Draw,’ an annual club pub run, an annual year-end prize-giving, and
also club weekends away. The highlight weekend is normally the Sabie Shufflers
weekend, where parties around the campfire, Springbok rugby supporting and
family time become the focus of the weekend.

Naturally, the club has it fair share of speedsters
and these include Anton Marais, Arthur Woolridge, Glen Mokgatlhe, Brian Curtis,
John Karle, Jane MacKinnan and Jodi Zulberg, to name but a few! And those members
who feel the need for speed can join the weekly time trials of 4km and 8km
every Wednesday. The club also boasts a Performance Squad, for runners who are
not always able to afford joining a club, or buying running shoes or
supplements. The aim is for them to achieve to the best of their ability
through the correct training and coaching, and who knows, perhaps someday one
of them will win Comrades! This squad is in the very capable hands of Club
Captain Ray Orchison, who has run five Comrades with a PB of 7:18.

BCC is one of the few running clubs that also offers
strong triathlon and cycling sections. The
Triathlon Section, headed by experienced triathlete Bill Coop, has grown markedly
over the last five years, and members participate in all distances, from sprint
to Ironman. In 2012, the club’s entries into Ironman SA and 70.3 were the
highest to date, 24 and 17 respectively. Many members excelled at provincial
and national level, with Jodi Zulberg, Arkaitz Poncela and Rob Kellock not only
winning their age groups in the SA Champs for ultra-distance triathlon, but
also going on to participate in the World Champs in Spain.

The Cycling Section, headed by
experienced cyclist Michelle Joseph, caters for all levels of cyclists and has
produced great results at various races countrywide.

THE DIS-CHEM HALF
MARATHON

BCC is especially known for its Dis-Chem Half Marathon, one of Gauteng’s
premier road running events and one of the biggest and most popular half marathons
in the country, with close to 6 000 entries. The organising is always superb and
many athletes look forward to this season-opening event, as it is not only
situated perfectly on the running calendar to kick the year off in style, but
is also known for one of the best goodie bags in the country.

The 2013 race will be the 32nd running and the celebration of
the 12th anniversary of the Dis-Chem sponsorship. Fundraising for
worthy causes has been a superb feature of the event, and last year R14 220 was collected for the Sports Trust as well as
another R12 660 for the Namaqua Dog and Donkey Foundation, all coming from
donations from race entrants. This was matched by the Dis-Chem
Foundation, bringing the total to R28 440 collected for the Sports Trust and
R25 320 for the NDDF!

So, if you want to have a lot of fun, meet and run
with a wonderful group of people, but still be competitive while achieving your
goals, this is the family to join. Visit the club website
at www.bedfordviewathletics.co.za
for more details.