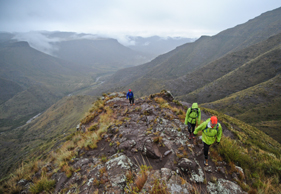 For trail runners wanting a taste of travel and challenge, this event is
perfect – it’s a three-day, 120km mountain running journey through the
magnificent Ketane Ha Mothibi and Thaba Putsoa ranges in the remote mountain
kingdom of Lesotho. Only this year, the Lesotho Wild Run got wilder! A
cold front moved in which meant maximum temperatures of about 12 degrees, rain
and wind, making the course muddy and slippery, considerably slowing the pace,
and changing the dynamics of the race, making it far tougher, but also a whole
lot more dramatic, more beautiful, more real.

My
plan for each day was to start steady, maintain a consistent pace, and finish
each stage strong. Most importantly, I needed to not get lost! The race is
self-navigational – GPS waypoints are provided and runners need to choose their
optimal routes between points.

Day
1 covered 43km with 2080m vertical gain, topping us at 2640m at the 32km mark.
The trails were incredible, passing remote villages reachable only by horse and
foot. Crossing the Ketane River, said to be “knee-deep at worst,” was an eye-opener
– the river was chest-deep and the force of the current was strong. I slipped
in a stream about three hours into the run and completely drenched my thermal.
Within minutes I was shivering. Fortunately I had a dry thermal in a ziplock
bag in my pack, so I literally stripped off my wet stuff, pulled on my dry
thermal and my waterproof, and felt like a million bucks again.

Day
2 – 28km with 2175m of climbing – was a stunner. The route circumnavigated the
Maletsunyane River Gorge with an eye-level view of the 192m Maletsunyane Falls,
the highest single-drop falls in southern Africa. Again, the single track was
breathtaking, a mountain traverse trail that often meandered just metres away
from 300m sheer drop-offs to the gorge below.

Day
3: 39km and snow! The air was cold, the ground crisp, and the beauty of the
surrounding mountains draped in soft white snow took the burn from our legs and
lungs as we pushed up the infamous Baboon’s Pass at around 2500m. The race
finished with a river crossing and a sharp climb to the lavish green lawns of
the Ramabanta Trading Post.

The
Lesotho Wildrun is an incredible journey filled with rich experiences and
intoxicating views into a world that time seems to have forgotten. For me, the
most lingering visual memory is a quintessential Lesotho image, of a tall,
statuesque Basotho shepherd high on a mountainside in the rain, wrapped in his
traditional blanket and leaning on a staff as he watches over his grazing sheep.

The
race was won by Jacques Mouton in 17:09. Linda finished first women and third
overall in 17:50.