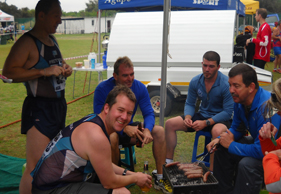 When you
get Wynand Du Preez, chairman of the Pretoria Marathon Club, talking about his
club, he immediately turns the conversation to history and tradition. For starters,
the club membership hails from all over the capital, but there is a notable
training group called ‘The Wilgers,’ which has been getting together for
morning runs Monday to Sunday in Wilgers suburb since 1978!

“It’s
definitely a great legacy to have George Claassen as our founder, and we have
some proud traditions,” says Wynand. “This includes the faster runners tracking
back after they finish a club run to fetch the guys at the back of the pack, so
that the group can finish together. We recognise the effort of all our runners,
and everyone here is treated the same.”

Wynand
joined the club in 2000 to get the licence number and club colours he needed to
run Comrades. “I thought I’d do my own thing, but started making great friends
along the way!” This club spirit helped him go on to finish the Comrades 13
times, when he initially he planned to only do two, and this year he completed
his 10th Two Oceans as well. Unsurprisingly, he describes the club
as his extended family and says he has made lifelong friends that he can call
on for anything.

“The
amazing thing is we are a small nucleus of Pretoria runners who organise to run
together all over South Africa, and at events we make sure to bring out the
gazebo and join up for a drink and bite at the finish.” That sees the club
provide free food and drinks at 10 races for its members, including Comrades,
Loskop, Om Die Dam and the local Deloitte Marathon in . The club partly sponsors the annual
weekend getaway for members, which this year was held at the Klein Kariba
Resort, and Comrades participants get free long-sleeve tops.

The club
also holds a year-end prize-giving and several social breakfasts, and will be holding
a 40th anniversary celebration later this year, where all the Alumni
will relive their glory days with family and friends. Meanwhile, on the racing
front, the club hosts the PWC George Claassen Road Race (21.1km, 10km and 5km)
on the last Saturday in January, an event that has consistently grown in
popularity since its first running 35 years ago. Then in late September, the
club organises the Andrew Greyling Memorial Run in ’s
suburbs.

“What I
love about being in this club is that you will find people who will share their
advice, you will find friends, a community and branch of support. For the board
members and volunteers who make coffee and scones on race days and for club
runs, there is no gain – except the love of running and being in it together!”