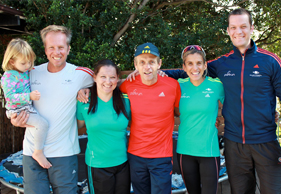 It all
started just over a year ago when Elana was heading up the JAG Foundation and
doing sterling work to get more and more youth involved in running. “However, I
saw that these kids are going to exit our sport unless we create a pathway for
them to get to the next level, and ultimately to the top levels,” She says.
“Then I looked which marathoners would be in contention for the Olympic team
and I was quite shocked where we are in distance running in SA. In the early
90s we had guys winning Big City Marathons, with over 40 guys breaking 2:15 in a year. Currently we only have six. You can’t expect runners to perform consistently
well at the highest level if you don’t have enough of them doing it, so I began
to think, other sports, like rugby, have academies, and I thought it can work to
get the runners working as a team to help each other run faster.”

And so
Elana signed off at JAG, joined forces with business strategist and former
training partner Janet Welham, and after a hectic period of planning and
meetings, Endurocad (short for SA Endurance Academy) was launched in June. It will be
dedicated to elite endurance athletes who wish to improve their times, make a
living from their talent and to build a brand and business for life after
sport. “There is so much running talent in South Africa. We want to identify
and develop these athletes and help prepare them for the 2016 Olympic Games in
Rio and to do well in the Big City Marathons,” says Elana. The academy
structure will ultimately be made up of an elite academy of 40 athletes based
in Stellenbosch and satellite squads based elsewhere. These athletes will then
have access to regular training camps, and the structure will have as a
foundation the community-based SA Can Run initiative.

Now Elana
is juggling a busy schedule, heading up the new academy while also raising two
young kids with partner Jacques Jansen van Rensburg. She is also to be found
every Saturday morning on Audacia Wine Farm, just outside Stellenbosch,
overseeing the Root 44 parkrun which she says ties in with her SA Can Run initiative. And she still does a bit
of running herself.

“It’s part
of who I am. I don’t feel the need to go show how fast (or slow) I am any more, but running is
still important to me – for my health, and sanity! Obviously being a mom of two
kids and having a family is the most important thing in my life, but you have
to juggle your time. It is taking a huge time commitment to get Endurocad off
the ground, so it is hard to fit in a run, but you have to make it a priority
if you still want to squeeze it in.”