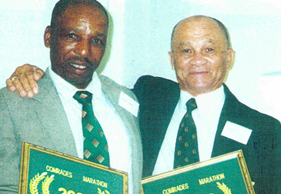 The small,
elderly coloured gentleman sits quietly at the exit point of the Comrades
Marathon registration area, until a runner tries to enter registration from the
wrong side. Then up jumps this sprightly 90-year-old Comrades veteran to point
the runner in the right direction. You don’t want to mess with Sam Draai when
it comes to his beloved Comrades!

Born in
1922 in ,
Sam served in the SA Navy during the Second World War, then began working at Unilever.
Having watched the Comrades for many years and taken up running himself, he
decided he wanted to run it, even though no runners of colour (or women) were
then allowed to enter. “I was just fascinated with the Comrades Marathon, and
when I ran my first one in 1964, I wasn’t allowed to run officially and I think
I was the only person of colour on the road,” he recalls. “Right from the
beginning, we had some runners I can mention, like Manie Kuhn, who were so
sympathetic. There were a lot of people behind the scenes talking to the Comrades
Marathon Association about giving me recognition, but the medals were never an
issue for me, I just wanted to be part of the Comrades.”

Sam finished
the race nine times unofficially between 1964 and 1974, clocking a 7:27 best
for the Down Run and a 7:37 best for the Up Run. The only blip on his record
was 1973 when he bailed during the Down Run. “I was already 41 when I ran my
first Comrades and I trained very hard, so I got better and better, but Comrades
in those years was really hard. There were no water tables, and if you were
lucky your second would get to you. In 1973, I ran all the way from
Pietermaritzburg to almost in Bothas Hill without any seconds, and that was a
bit much for me.”

INTO THE OPEN ERA

In 1975 Sam
was finally allowed to run the race officially, and he went on to finish a
further seven times for a final tally of 16 finishes, the last coming in 1986.
“My last one was an uphill battle and I finished in just over 10 hours. Then I
was diagnosed with high blood pressure and that stopped me from running. I
would have carried on, otherwise, and been another Wally Hayward, still running
in my 80s!”

Many years
later, the Comrades Marathon Association took the decision to officially
recognise all the Comrades finishes by non-white and female runners prior to
1975, and that saw Sam awarded the Green Number 1258, as well as his nine
outstanding medals, which saw him finish with seven silvers and nine bronze. “At
the function at Comrades House where we runners of colour were awarded our
medals, they asked me to speak, but I didn’t say much, just that I had never
dreamt the day would dawn that I would be recognised for my running. Like I
said, the medal was not the criteria; it was all about the runners, a wonderful
family day out on the road.”