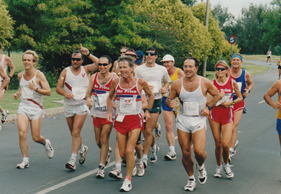 In November 2011, Don had both his legs amputated due
to complications caused by the atherosclerosis condition he suffers from, which
is the hardening of the arteries. But when his good friend and former Rocky
Road Runners clubmate Dennis Tabakin, head of the Achilles SA
Foundation, heard about it, he immediately sent Don a message: “Sorry to hear about your legs, but I’ve got a wheelchair entry for you
for the 2012 New York Marathon, and I’ve got a hand-cycle you can borrow, so
start training!”

Thus Don, accompanied by his wife Olwyn, was part of
the Achilles SA team of 10 athletes with various disabilities due to fly to New
York on Sunday 28 October – just as all the flights to the ‘Big Apple’ were
cancelled due to Hurricane Sandy. After a few anxious days, they duly got there,
but on the Friday night they heard the race was cancelled. “Next thing we knew,
the race had been dubbed the ‘Let’s Run Anyway Marathon’ and our team managers,
Dennis and Braam Mouton said we’d go do our own marathon in Central Park,” says
Don. “It turned out that between 4000 and 5000 other runners had the same idea!
Some people went clockwise, others anti-clockwise; Some did four loops for the
marathon distance, including me, while others just did one. The spirit was
amazing, and the people who live around the park looked after us with water and
snacks. It was one of the most heart-warming experiences of my running career.”

Don was born in England and came out to South Africa
when he was 21. He initially worked as an analytical chemist in the mining
industry, then later moved into research and finished his career as a technical
director at Bovril. He retired in 2002 and moved to Cape Town to be closer to
his two sons. His first marriage to Charlotte lasted 29 years, and 10 years
after his divorce he married Olwyn, whom he had met through running at Rockies.

Don ran track at school and university, but focused on
soccer and hockey for many years thereafter. “Then one day in 1977 a friend who
was a Comrades runner asked if I wanted to try a road race, so I ran the
Florida 16km. At that time, you started Joburg races according to a handicap
system, so I set off with the first bunch. I did well and finished sixth, and the
next week I was only given a 15-minute handicap.” A year later Don lined up for
his first Comrades, and he says his two silvers in 1982 and 1984 were the
highlights of his Comrades career, both earned on the ‘Down Run.’ Having run
seven consecutive races, he was unable to start in 1985 due to a blocked artery
in his leg. “I had to have a bypass put in, but bounced back and went on to run
another 12.”

Don’s coaching career began early in his running
career. “Before my first Comrades, I struggled to find good training advice,
and Dennis and I realised people needed more help, so we decided to put
together the Comrades Panel Talks, with a famous runner as motivator, a medical
doctor and a physio, and then I did the training programme. Only people who had
run Comrades were allowed to talk, and the attendance soon grew from 50 people
to over 600!” Over the years, Don came to be recognised as the guru of Comrades
training and his programme was published in Runner’s
World magazine. That, in turn, led to him becoming the first official
Comrades Coach, and with Ian Laxton, he developed the Comrades Roadshows, based
on the same format as the Panel Talks. After years of service to the race, Don
was rewarded firstly with the Comrades Marathon Association’s Platinum Medal,
and then later with a Spirit of Comrades Award.

His Comrades running unfortunately came to an end in
1998, when he had to bail while going for his 20th medal. “I had a
blockage in my heart, and really shouldn’t have run that year, but being a
typical runner, I still lined up. I had a heart bypass three months later, then
tried to start running again, but all I could manage was a few fun runs.” Now,
14 years later, in spite of losing both legs, Don has made a comeback – and he
isn’t done yet. “The organisers of the Outeniqua Wheelchair race in George in
February have invited me to participate, so now I’m busy training for that!”