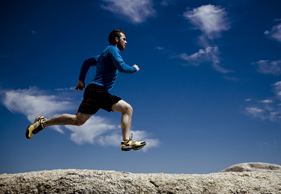 Many of us watch the weather on the TV news to see
what to expect for the next few days, especially if we have a training session
or race coming up, and so, for about three minutes, we listen intently to the
weather presenter talk about low pressure cells and cold fronts, showers and
wind forecasts, and minimum and maximum temperatures. Now most of have a pretty
good understanding of the weather patterns, but what we don’t know how is how
much work goes into predicting the weather and then packaging it for TV.

One person who does know is Derek Van Dam (30), the
Cape Town-based head of the weather department and chief meteorologist for e
News Channel Africa. “I’m part of a team that does the daily broadcasting, and
there are three parts to our job: Meteorologist and weather forecaster,
graphics producer, and presenter. We use computer models to take an initial set
of conditions and predict into the future, but I will be the first to admit it
is still an educated guess, because Mother Nature can be unpredictable and doesn’t
care what the SA Weather Service or Derek Van Dam said.”

Derek hails from Grand Rapids, Michigan in the USA. He
studied meteorology as well as broadcast and cinematic arts, and then worked
for a local TV station for four years as their morning meteorologist. Then in
2007 he came to Africa with the Christian non-profit organisation,
Compassionate Life Foundation, working to help orphans affected by HIV/AIDS in
Swaziland, and after an intense experience there, came to Cape Town for a
holiday.

“I rented a house in Camps Bay and when the rental
agency found out what I do, they asked if I wanted to meet the people at eTV,
across the road from their offices. It was good timing, because eTV was about
to launch its 24-hour news channel, and they offered me a job. I was only supposed
to stay for two years, but nearly five years later I’m still here. I’ve had
such an incredibly warm welcome from Cape Town’s people, and SA in general, and
really feel at home. It shows what kind of accepting people live here, and I
can really see why this is called the Rainbow Nation.”

The sporty lifestyle also suits Derek well, he says.
“I’m a pretty adventuress guy who likes mountain climbing, surfing and a daily
run on Table Mountain, so Cape Town suits my lifestyle. I believe my career
should fit my lifestyle, not the other way round, and I won’t sacrifice
lifestyle for a bigger paycheque. It’s easy to say that living in Cape Town,
but I wouldn’t want to live in a city that doesn’t suit my active lifestyle. I
would be claustrophobic and unhappy.”

Derek played competitive soccer up till college, until
a dislocated shoulder ended his playing days, but being surrounded by a fit
circle of friends and having active parents, he soon picked up a new sport. “I started
running and worked my way up to 10km, then the half marathon, and now I’m
getting ready for my first marathon in November at the Winelands Marathon in
Stellenbosch, where I hope I’ll catch the marathoning bug. I’m also hoping to
qualify for the Two Oceans, and then maybe go on to Comrades. My girlfriend,
Tara, has done the Comrades, so I’m feeling the pressure!” he jokes.

Derek prefers trail to tar, however, and his day
starts with a 7am 10km run on the mountain. “I can literally walk straight out
my back door and start running, and I don’t need to carry water because I drink
from the mountain streams.” Then, after his must-have post-run coffee, it’s off
to the office and a very busy day checking weather patterns and preparing the
weather forecast for the daily news shows. “I often work through lunch and eat
at my desk, which I know is a bad habit, but we’ve got a lot to get through
each day.”

BLAME IT ON THE WEATHERMAN

Ask him if he has he ever gotten a forecast totally
wrong and Derek bursts out laughing. “I’ll never live this one down. The whole
eTV company did a team-building climb on Table Mountain, so the CEO mailed me
for a detailed forecast and said the whole company was counting on me. I predicted
a sunny day with moderate wind and no rain, but I forgot about the tablecloth
of cloud that forms on the mountain, so I didn’t warn them about really cold, wet
conditions up top. Everybody got soaked and I still get ripped about it.”