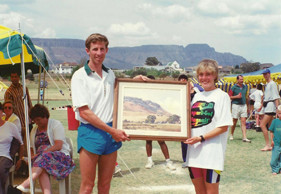 It comes as no surprise that the people of Harrismith dubbed
Michael McDermott ‘The Mountain Goat’ and used to write supportive messages for
him along the route of the Harrismith Mountain Race, much like supporters do in
the Tour De France. Or that the race organisers would set him up in the hotel
room with the number that corresponded with the win he was going for. That’s
because Michael became a hugely popular and inspirational figure in the town
thanks to his 16-year winning streak in their annual race.

Michael’s love affair with Harrismith’s imposing
Platberg began in 1978, when he was just 13. “I was alone at home and ran 5km
to the Harrismith Harriers clubhouse because I wanted to run that day, but
no-one was there, so I ran back home. Then they called me up to ask where I was
and came to fetch me. So before the race, I already ran 10km,” says Michael,
who ran the race and finished 32nd. “Nobody
believed I had completed the race, though, because I was so small!” he laughs.

In 1980, he finished eighth and qualified for a gold
medal, but had to receive it unofficially, behind the tent, as he was still
below the minimum 16-year age limit for the race. A year later and now ‘legal,’
he finished fifth, and then in 1982 he posted the first of his 16 wins, a world
record that has only been equalled by Michael McLeod of England, and which only
came to an end due to a freak injury suffered when he was on his way to a 17th
straight win. Having built up a strong lead, Michael looked back to see if
anyone was chasing, stepped skew and tore ligaments in his ankle. “I managed to
finish the race in fifth, which was really disappointing, but on the other hand
it was a relief because there wasn’t that pressure to win after that.”

The running bug bit Michael at the age of 12 when he participated
in a 1 500m event at school and came stone last. “I remember telling my mom that
I would never come last again, and she said if I wanted to do that I would have
to train harder.” A month later he won the school’s next cross-country meet. “We
lived on the fringe of the town where I could step out and run on the
mountain,” says Michael, “there were ten hills, 100m long, and I used to scale
them in 15 minutes.”

Just a year down the road and Michael won several North
Natal cross-country events, grabbed fourth position in the Natal Champs, and then
did well in his age category at the SA Championships. In later years, he earned
Springbok colours in 1988 for cross-country, and was invited to run a number of international mountain running events in the
early 1990s. He shattered the course record of the Swiss Alpine Marathon in
1993 and won the race three times, along with second and fourth place finishes
in subsequent years. He also represented SA seven times in the World Mountain
Trophy, from 1993 to 1999, with a best placing of fifth in 1993 in France.

CALL OF THE MOUNTAINS

After Michael’s ankle injury in 1999 ended his streak,
he subsequently picked up knee problems and felt he had to tone the running
down, so he took up mountain biking and found a new outlet for his competitive
nature. “I enjoy mountain biking and am leading the veteran
category in the Nissan Trailseeker Mountain Bike Challenge and I am also
currently second on the USN Mountain Bike Cup for veterans. The change to cycling has been great and I’ve become hooked. I feel like
I’ve always had a competitive edge, in running, cycling, running my business –
I try and do my best.” He adds that one of his great pleasures in
life is to share mountain rides with his wife Marietjie and his kids Marilyn
(16) and Leonard (7).

Today, Michael lives with his family in Pretoria and
owns and manages two Wimpy franchises in Balfour Park and Killarney. Looking
back on his Harrismith streak, Michael says that “Every year had its
own challenges, from blistering heat to rain and mud, gale force winds, icy
cold, thunder storms, even snow. Many top athletes tried to take first place
from me, and the pressure was always there – I even ran the race when I was
sick as a dog with flu, not a good start for such a tough race! It’s a race
that will stay in my heart forever.”