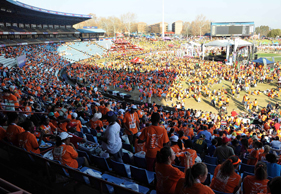 As Pretoria’s temperature hiked up to 32 degrees and I
began melting, still being used to the Highveld freeze, it dawned on me: I
should’ve trained more! I was hoping to get in under 1:30, but along with my
mother Debi and aunt Janeen, I would be happy just to finish. Meanwhile, my
brother Brent and cousin Devon decided to man up and don bikini tops, but other
men went the whole nine yards and dazzled in tutus.

THE HEAT IS ON

The busy start meant it took us five minutes to get
going. I started well, allowing my legs to warm up on a flat 2km stretch before
the first sharp incline. I had lost my mother and aunt in the orange traffic,
but around the 3km point, as the route climbed, I found them again, now looking
decidedly pink in the cheeks – the heat was incredible and we used water
sachets to cool down.

With a sharp downhill for the next 2km, I gave myself
a breather, and when we passed the halfway point in Centurion’s quiet suburbs,
we all enjoyed ourselves as the locals cooled the pack down with their garden
hoses. Then, with about 3km to go and the stadium light pylons visible in the
distance, I powered up to a steady run, and with my mother and aunt by my side,
we finished hand in hand in 1:32. After a scorcher of a day, it was better than
I expected! The boys finished in 52 minutes in their first ever 10km event and
we rewarded ourselves with a cold beer.

In the elite race up front, Ren? Kalmer took top honours
in a time of 34:50, followed by Rutendo Nyahora (35:28) and Nolene Conrad
(36:43). I remember my mother saying “That’s three times faster than us!” With
her fourth win in the 2012 Spar series, Ren? has already secured the Grand Prix
Series title, but will be chasing a fifth win in Johannesburg on October 14th.
No one has won all five legs before in a single year, so here’s hoping Ren? can
make history!