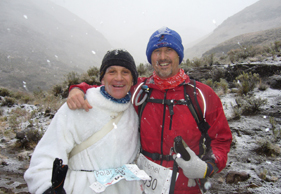 There was talk on the way down to
Rhodes about extreme weather in the Cape and everyone was getting excited (and
a little nervous). As all Rhodes runners know, this is the one race that we all
pray for bad weather. We want it cold, we want snow, and we want ice – and this
year we got our wishes!

Friday dawned crisp, clear and
beautiful, and we all met up at the local school, in full costume, to hand over
a ‘box library’ to some of the kids that we could rustle up in holiday time.
Lots of fun was had by all, and we also gave some moral support to the amazing
team from DM Kisch Attorneys, who had been painting the school classrooms for
two days already!

And then the weather arrived… As
the day got progressively more cloudy and cold, we rested (and ate) for the next
day’s race, and I made final tweaks to the Polar Bear costume that I would be
wearing to raise funds for the Run to Read Challenge. It started raining in the
evening, and it rained and rained and rained – my first experience of this in
10 Rhodes runs. “The rivers are gonna’ be fun,” I thought. Race organiser
Darrell Raubenheimer also informed us that he had various routes mapped out
“just in case…”

Actually, the 5?C start was
disappointingly the warmest I have experienced at Rhodes, especially given that
I was wearing a ‘fur duvet’ and oversize fibreglass head! However, this was
soon to change. The route had been adjusted to two ‘out-and-backs’ because the
top of the mountain was completely inaccessible (and still was at the time of
writing, two weeks later), so we all managed to see the top guys flying past us
on a couple of occasions.

About an hour into the run the
rain started, then the sleet, and finally the snow, much to the delight of the
runners, and this was accompanied by much photo-taking. As we ran on, the snow
got thicker as we progressed ever upwards. This wasn’t ‘African snow,’ this was
proper Northern Hemisphere-like snow! We ‘ran’ on into the biting wind and snow,
not to mention several freezing river crossings, and the polar bear suit
started to get wet. And heavy.

The checkpoint tables were as
always amazing, and deserve a medal themselves for being out there in that weather.
The Polar Bear, his trusty vet (physio) Jane MacKinnon and my good friend from
KZN, Lionel ‘Farmer Brown’ Howard, had a long, slow run, but everyone who
passed us gave us heaps of encouragement and all were slightly jealous that I
was so warm in my rug.

After experiencing the first ever
‘rolling checkpoint’ and trotting back towards the wonderful hamlet at Rhodes,
I got a serious ‘bear hug’ and an amazing cup of tea at the last checkpoint,
which nearly reduced me to tears – but as we all know, real bears don’t cry…
Then we came down the street to the finish, to huge cheers from the amazing
supporters who had braved the elements. This had been a shorter but very tough
and hugely memorable Rhodes.

To all the fantastic Rhodes
runners, friends of Rhodes and other supporters, thank you for your generous
support of our ‘Run to Read’ challenge for the local school. We raised over R20 000, and you have all made a big difference to
some very special children in a wonderful but very poor part of our Country.