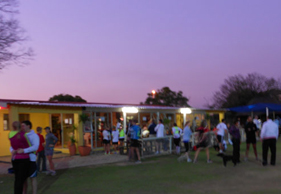 “Run
days are fun days! That’s the motto of our club,” says Randburg Harriers club
secretary Michelle Knotzer. “And this is a very family-orientated club. Running
is an individual sport, and since athletes put so much of their time and energy
into their sport, we like to make their families a part of it as well, so we
make sure they feel welcome to attend any event and to offer moral support to
their loved ones. We therefore involve the families as much as possible.”

That’s
how Michelle herself got involved in the club, despite the fact that she says
she is not a runner. Her parents are both long-time members of the club – her
father is a runner and her mother a walker – so she has spent a lot of time
there since a young age, but little did she know back then that she would eventually
be running the club. “I’ve now been club secretary for nine years and all the
hard work I’ve put into the club has turned it into a passion and a family
thing, more than just a job.”

The
club was founded in June 1982 by Dave Jack, who felt the need to start a new
club in the Randburg area, and he convinced three of his friends to come in
with him, Tony Kirby, Tony Turner and Leon van Wyk. Leon is more famous for the
clocks and trophies he makes as special gifts for runners with Comrades Green
Numbers, and he still makes all the club’s trophies all these years later. The
longest standing member of the club today is Rod Pearson, who was the very
first member to sign up for the new club, even though he wasn’t even a runner
then, but 30 years down the line he has completed 22 Comrades Marathons.

In June this year, the club celebrated
its 30th birthday with a big gathering of both former and current
members, the latter now numbering 490. This year at Comrades, the club had 215
entrants, the fourth-largest club contingent, of which 133 made it to the start
line and 123 finished the race. Amongst them was Reform Ndlovu, whose excellent
6:46:42 saw him finish as first Randburg Harrier home and 24th in
the men’s veteran category. The fastest female finisher in the club with a time
of 8:24:24, was Paula Quinsee (17th in the women’s veteran
category), who earlier this year took part in the 9in9in9 Challenge. This saw
her run nine marathons in nine provinces in nine weeks, along with Eric Wiebols
and TV weatherman Simon Gear, to raise funds for the Starfish Greathhearts
Foundation.

Randburg
Harriers hosts the massively popular Valentines Nite 10km in February as well
as the Kwai Half Marathon, 10km & 5km in May, both of which start and
finish at the Randburg Central Sport Complex on the corner of Republic Road and
Silver Pine Avenue, which is the club’s home base. The club is a big supporter
of charitable good causes, so a sizable portion of all money raised from the
entries at these two races is presented to the club’s two official charities, the
Ann
Harding
Cheshire Home for the Disabled in Randburg and the Whiggles and
Squiggles School for Special Needs Children.

The
club hosts two time trials a week, both of which start here as well, offering
8km and 5km distances on both Thursday evenings and Saturday mornings. Then on
Sunday mornings there are long training runs of anything between 18 and 32km,
and the club also organises track sessions coached by Dave Coetzee for those
members looking to do speed work. While road running is the main focus, the
club has added a cross-country section, which has attracted more young runners.
Added to that, Cresta Wheelers have now sharing the club premises, and this creates
a perfect environment for those runners who would like to participate in
cycling or triathlons as well.

However,
it’s not all just ‘business’ at this club, says Michelle, jokingly explaining
that “Randburg Harriers members often joke that they are drinkers with a
running problem. We have a large number of social butterflies who love to have
a beer in the clubhouse after their time trial, and that creates a great club
vibe that anybody is welcome to enjoy with us.”