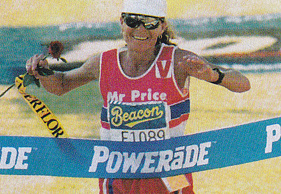 When
Rae Bisschoff took the lead 10km into the 1998 Comrades Marathon, all the
leading contenders let her pull clear while they kept an eye on each other,
thinking the 44-year-old veteran would eventually fade out of contention… but
Rae boasted a rich Comrades pedigree that made her a top contender, despite her
age: Eight finishes, including 10th in 1989, eighth in 1991, second
in 1993, 11th in 1995, and ninth in 1997. So when she was still well
clear of the pack after the halfway mark, a panicked charge began to try catch
her.

Up
front, Rae quietly and steadily continued up the road, ignoring the
increasingly frantic shouting from the crowd as 1994 winner Valentina Liakhova
closed the gap, and she crossed the line just 19 seconds clear of the Russian
to win in 6:38:57 in one of the most unexpected and enthralling wins the
women’s race has ever seen. It was also the first win by a South African woman
since Tilda Tearle’s 1993 victory (when Rae was second), and it remains the
last time a local won.

Rae
says that she never imagined she’d actually win the Comrades. “I remember
talking to Allan Robb at the start and telling him that my goal for the day was
to improve on my personal best and break seven hours. He commented that he and
I will then be seeing a lot of one another, as he was also aiming to finish
under seven hours – and yes, we did! But I did not actually realise I’d won it
until I crossed the finish line. I just kept asking people around me, ‘Can you
believe that I have just won the ladies’ section?’”

However,
she describes the win as “bitter-sweet,” because she has always shunned the
limelight. “I run for myself and not to impress or defeat others. It is nice to
achieve your goals and I like to get on with what I love doing, but don’t like all
the attention.” However, Rae had to get used to being recognised, not only due
to her Comrades win, but also because she was selected to represent South
Africa in the World 100km Championships in Japan (1994), Holland (1995), Russia
(1996) and France (1999), while other big wins included the British London to
Brighton Ultra in 1997 and the 1998 Washie 100 Miler, just two months after winning
the Comrades, finishing third overall in a still standing women’s record time
of 14:53:06.

As
a local,
Rae grew up with the Comrades, standing besides the road watching the runners
pass and thinking that she might like to run it one day. At school, she was an
active sportswoman, doing netball, hockey, swimming and athletics, but only
really got into road running some years after school, while living in . “I loved running
along Sea point and . The views were
awesome and I reached a stage where I just had to be out there!” she says.

She
says she enjoyed a relatively injury-free running career, with only a slight
ITB problem to concern her. Therefore, she found it simply unacceptable one
year when a groin injury kept her out of action for six months. “I just
couldn’t believe that I was unable to run; I was so desperate just to run again
that I would get dressed in my running gear every day only to be reminded that
if I cannot walk properly, how did I expect to run? I have learnt over the
years that one has to listen to your body and not kill yourself trying to
achieve your goals.”

Rae
is now 59 years old and still running races, in the colours of the Nedbank
Running Club, whenever her busy work schedule allows. And if she’s not running,
she is taking long walks with her husband, swimming and gymming. She says her
husband is her greatest supporter, often driving her to early morning races
without a complaint. “I remember one instance where I got the start of the race
so wrong that we landed up driving the night before all the way to Louis
Trichardt, only to find out that the start of the race was only about two hours’
drive from Joburg at Trichardt, near Evander!”

In
the future, Rae is looking at new challenges in triathlon and aiming for her
Comrades Double Green Number for 20 finishes – she has 14 medals to her name
already, and still loves the race. “It will always stand out as a very special
event for me.”