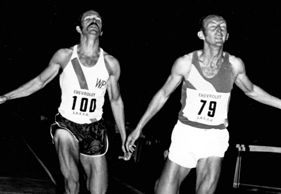 In
the early 1970s, a group of young South African middle distance athletes were
setting the world alight, not only with their times, but also their great friendly
rivalry, pushing each other to better times. Dicky Broberg, Marcello Fiasconaro
and Danie Malan really were world class, and it was their misfortune to reach
their athletic peak just as international condemnation of South Africa’s
Apartheid policy saw the country banned from international competition.

Still,
they left us with incredible memories of track racing at its best, and many
consider Danie Malan the pick of the bunch. Between 1973 and 1976 he set a
world record for 1000m and also set SA records for 800m, 1500m and the mile.
Two of those national marks were only bettered some 30 years later, and he
remains one of the greatest athletes ever produced by this country.

Danie was born in 1949 on the family
farm, Salomonsvlei, just outside Paarl. He took part in athletics from a
young age, beginning with the short sprints and hurdles, but his career really
took off in high school, when he won the national under-17 title for 400m at
the 1967 SA Junior Champs, followed by the under-19 title for 800m in 1969. After
school, Danie obtained a Bachelor of Science degree in agriculture from
Stellenbosch University. At that time, the Maties athletics club boasted
several world-class athletes, including great friends and rivals Danie and Dicky.

Their most famous race was on 31 March 1971 at Coetzenburg, when Dicky set a SA record of
1:44.7 for 800m and Danie ran 1:45.1, the two fastest times in the world that
year. “It was all about pride back then, to be the best in the world,” says
Danie. “I had a great rivalry with Dicky, and Marcello at UCT, and there was
also rivalry between the universities, especially Stellenbosch and UCT.”

“Also, in those days, to get
Springbok colours was a huge thing. In my second year at Stellenbosch, in 1970,
I was chosen for a Springbok team for the first time and toured overseas, competing
in Greece, Germany, France, Belgium and the UK. But that was the last Springbok
team to go before international isolation – after that, we could only compete overseas
as Maties students, which is why most of my overseas photos are in Maties
colours.”

Unfortunately,
Danie picked up a leg injury at the end of 1971, so didn’t compete in the 1972
summer track season, but interestingly, later that year he ran and won the
Peninsula Marathon in Cape Town, clocking 2:32. “I always considered the road
just training for the track. My coach believed in us building up slowly with
long distance training in the winter, so I was running 35-plus kays and then
got into the marathon. I was actually making fun of it at first, but suddenly I
was alone in front. With four miles to go I hit the wall and I was dead at the
end!”

Danie’s greatest year came
in 1973. On 27 May, he finished second to American Rick Wolhuter over 800m in
Los Angeles, setting a new SA record of 1:44.5. A month later, in Munich, he broke
the 1000m world record on 24 June, running 2:16.0 to improve the mark from
2:16.2, held jointly by J?rgen May
of East Germany and West Germany’s Franz-Josef Kemper, which had stood since
1965. Just two weeks later in Zurich, on 6 July, he beat European champion
Yevgeniy Arzhanov over 800m in probably the race of his life. Then later that
year he beat 800m world record holder Marcello Fiasconaro in a pulsating 800m
at the SA Games in Pretoria. “I was really on top in 1973, and ran some of my
best races that year, but the greatest moment of my career was looking up at
the clock in the Olympic Stadium and realising I had broken the world record.”

In 1975, Danie broke the SA
record for the mile, running 3:54.60 in Stellenbosch, and in 1976 he broke the
SA record for 1500m in Zurich, while on honeymoon with Mildie in Europe, running
3:35.98. That meant he now held every national record from 800m to the mile,
bit it also signalled the end of his track career. “While we were in Switzerland, we
heard that South Africa had been kicked out of international competition
completely. I appreciated it very much when the stadium announcer said, ‘Danie
Malan of South Africa, always welcome in Zurich,’ but we were now out
completely.”

Danie announced his decision to retire from
competitive athletics and focus on farming, saying, “Now that I’ve lost what little
international competition kept me going, there’s no reason to stay on.” He
continued to run, including finishing fourth overall in the 1978 SA Cross
Country Champs and helping the Western Province team win the team title, but
his track days were over.

These
days, Danie still runs regularly, doing 40 to 60 minutes on the mountain next
to his farm, although he says it is difficult to fit in running in the busy summer
months. “I also did triathlon in the 90s – my swimming wasn’t so great, but
then I don’t know any runners who can really swim! I went to the Masters Triathlon
World Champs three times, as well as the Master Duathlon World Champs once,
where I came fifth in my age group.”

Danie
and Mildie have four children, and all of whom are road runners. Sons Wynand
and Philip help him work the family farm, which produces fruit, table grapes
and dairy products and has been owned by the Malan family since 1837, while
daughters Helen-Elise and Barbara also work in the fruit industry. He is still
in touch with great friends Dicky and Marcello, both of whom live in Johannesburg,
and still passionately watches athletics, although he is disappointed by the
standard of South African athletics at the moment. “I think we’ve got huge
talent in this country, but it needs to be managed properly, and unfortunately the
administration of athletics in this country has not been good in recent years.”

When
asked how he thinks the athletes of his generation would fare today, Danie
says, “We ran on cinder and clay tracks, and didn’t use the supplements and
other products that today’s athletes have, but we were so motivated. I think we
would do very well today!”