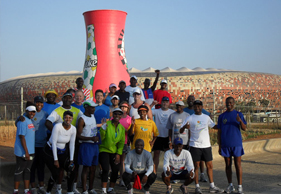 Diepkloof
Athletics Club was founded in 1984 and today still inspires the Diepkloof
community in Soweto by providing enthusiastic and inspiring runners a platform
to maintain a healthy lifestyle and spirit of running. The club thrives on
youth development and athleticism in the wider Soweto region, and focuses on
keeping young athletes away from township boredom that could potentially lead
them to drugs and criminal activities.

“In short,
the club believes that excellence is cultivated from a young age,” says Stan
Itshegetseng, the club’s chairman and financial advisor. ”We believe we create
leaders here. We have produced them over and over again. What we lack in funds
and technicality, we give back in strength and community,” says Stan.

A PILLAR OF STRENTH

The club’s primary
goal as a community institution is to change the idea of athletics in the area.
While the club is open to both young and old to uphold healthy, fulfilling
lifestyles, the club focuses more on the youth. The idea of promoting running
and the significance sport has on a person’s life is a chief idea for the club.
The club’s manifesto stands proudly as a democratic one, encouraging young,
old, all sexes and all races to join in on the fun week after week.

In a black
community, the club’s impact is crucial, believes Stan. The club aspires to use
running as an education and mindset, giving people a way to live a better life
when so often theft, drugs and alcohol appear easy ways out of poverty and
unemployment. In doing so, the club is looking to introduce athletics camps
during school holidays. “This is one area of focus that we have to seriously
look into to keep our athletes from township boredom that could potentially
lead them to drugs and criminal activities,” says Stan.

In its
first two years as an athletics club, only 20 members were part of the
movement. Now, close to 28 yeas later, around 250 members are registered,
including juniors, teens, seniors, masters and grandmasters. Most notable of the
athletic stars the club has produced are

?
Petrus “Qcoga” Monyai, 3 000m steeplechase SA Champion from youth and junior to senior
categories from 1998 to 2005, and who has won marathons in England, France and
Mexico.

The club’s vision is to develop
athletes who can compete at a regional, national and international level. “Our goal is to produce champions
and in doing so we are trying to unearth talent in Diepkloof or any of the
previously disadvantaged areas. Even though we do not have many resources and
use a gravel track in Diepkloof, we have produced good athletes,” Says Stan.

The club
used to organise a 15km and 5km race and prominent ‘celebrity’ runners like
Sonja Laxton, Kim Laxton, Gladys Lukhwareni, Dimakatso Morobi, Shadrack Hoff,
George Mofokeng, Coolboy Ngamole and Lucky Mohale have all run the race. The
event changed in 2005 and 2007 due to the club playing host to the Central Gauteng
Half Marathon Championships, and the annual event now comprises a 21km and 10km
run, with a 10km walk and 5km fun run.

The Diepkloof
Athletic Club sees its growing membership and participation in regional races as
testament to the power of running and a sporting lifestyle, and how they can
improve one’s mindset into a positive, optimistic one. And the club is planning
to continue with its focus of not only producing great athletes, but also giving
the youth of Soweto a way to live a better life.