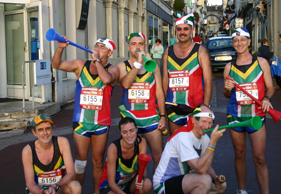 Responsible
for the marketing of Nedbank and its corporate identity, all brand exposure and
heading up public sponsorships, Greg Garden thrives on the challenges that his
job presents. He lives a life of travelling, meeting clients, events and using
new technologies to put Nedbank on the map. With a communications background,
Greg enjoys finding new ways to bring Nedbank into the public sphere and lends
his experience to position Nedbank as a top leader in its field. And on top of
all this, Greg also serves on the board of the WWF Green Trust, and is a director
of both The Marketing Association of South Africa (MASA) and The SA Audience
Research Foundation (SAARF).

You’d think that someone with such a portfolio would
have little time for anything else, but in between the meetings and corporate
obligations, Greg makes time to keep active. He runs five days a week to keep his
mind at ease, a time he says he uses to plot the day ahead. “It was not always
like that for me. I turned 40 and looked in the mirror and I didn’t like what I
saw. My friends were runners and they were on my case to start, but I hated the
idea,” says Greg. However, a year later in 2001, Greg ran his first race in the
Reebok Half (now the Dis-Chem Half Marathon) and was hooked.

FOR THE LOVE OF THE RUN

To date,
Greg has run three Comrades Marathons, seven Old Mutual Two Oceans ultra’s and more
than 25 marathons, including international races in Boston,
Paris and London.
Greg embraces running and believes having fun while doing so is all part of it.
Therefore, he makes sure he dresses appropriately when he runs international
marathons, such as the time he wore a South African flag in the fancy-dress
Medoc Marathon in France.

He treasures
travelling and the memories that go with great runs. In 2010 at The London
Marathon, Greg met an unlikely running partner at the 16km mark, “I was running
past the crowd and everyone shouted ‘Go Gordon!’ I looked beside me and there
was world-renowned chef Gordon Ramsey. We had a great chat, but at the 24-mile
mark Gordon cursed me for running too fast.” Greg describes that London Marathon
as incredible, but punts the 2008 Boston Marathon as his most memorable. “It was
a highlight because I ran my 3:24 PB at 51 years of age, a full six minutes off
my former one!”

Leading an
active lifestyle needs to be backed by a healthy diet, says Greg, who lives on
Low-GI foods and eats in moderation. Being a certified wine judge and
collector, he feels that he can also spoil himself with more wine because he is
a runner! Greg loves to spend time with his family; his wife of 26 years,
Brenda, his daughter Caley and son Robin. He relaxes with his love of wine and
a vast collection of eclectic music. “And in between all of the things in my
life, I still sleep,” he says.

So, what
about those who say they can’t fit exercise into their busy lives? “You don’t
have time NOT to do it. Long-term, you will be healthier and happier. If anyone
asked me what are the five best achievements in my life, I’d say my work, my
marriage, my children, buying my first home and running.”