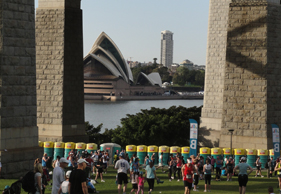 In 1962, Twentieth Century Fox released one of THE great World War II movies called The Longest Day. It had a magnificent cast, was nominated for an Academy Award that year and examined the D-Day landings on 6 June 1944 in Normandy, France, from the perspective of both the Allied and Axis forces. If you’ve never seen it, make sure that you do. I think I had my own ‘longest day’ on Sunday 19 September in Sydney, Australia.

I blame Toni for getting me into road running in the first place – I knew I should have stuck to rugby, but she is a great physio who knows a thing or two about running (she’s done 21 Comrades) and it made good sense to have my own physio along on this run, as I’d been nursing a tweaked Achilles tendon for weeks before flying out of OR Tambo.

DOWN UNDER
I had been hosted like royalty by former school friends now living Down Under, who showed me the sights and sounds of both Melbourne and Sydney. We spent a wonderful morning catching up and catching fish on the Friday before the race. Like Cape Town and Vancouver, Sydney is a truly beautiful city, and running a marathon there was a real privilege. There were sufficient Saffers in attendance for it to almost feel like the average weekend start at any of the many SA marathons each weekend back home. Well, almost…

Those daft Aussies, in their ‘wisdom,’ elected to start the half marathon at 6:20 and the marathon at 7:30 – resulting in most of the 4 000-strong field finishing as it got properly hot! And it did – go figure! I’ll have some feedback for them once the inevitable post-race survey rolls around on e-mail.

AWAY THEY GO!
So we set off from Milson’s Point over the iconic Sydney Harbour Bridge and my Achilles hurt from ‘Step One, Kay One.’ Then onto a scenic route that followed significant stretches of the 2000 Olympic Marathon route, with the original ‘blue line’ still visible. Water tables were well-managed with sufficient refreshments, but alas, no Coke – something else we could teach the Aussies.

The route itself was benign and by SA standards would be considered an easy one, with just the odd climb. However, I could only live with the pace of Toni, Mike Bray (Publisher of Modern Athlete) and the others to about the 25km mark. It would have been unfair to expect them to stick with my laboured pace; as the mild discomfort caused by hobbling on a dodgy Achilles had progressed to a dull ache and the hobble to a limp. And it was hot.

Having toured Sydney and received good crowd support all along the route, we eventually caught sight of the white roof of the equally iconic Sydney Opera House, where the marathon finished, only to run away from Circular Quay for 4km before turning back and then finally rounding it and crossing the line outside what is a magnificent backdrop for a race finish.

THE JANE MCGRATH FOUNDATION
What kept me going through all the discomfort wasn’t just the ticking-off of another continent, but also because I’d chosen to run this race in aid of the Jane McGrath Foundation. The great Glenn McGrath, world record holder for the most Test wickets by a fast bowler (563) is a mate whom I’ve known since the Aussies toured SA under Allan Border in 1994. I’ve known Glenn (or ‘Pigeon’) all through his courtship, marriage and ultimately the loss of his wife Jane to breast cancer, and I wanted to do this run in honour of that.

It was the wonderful generosity of so many friends, colleagues, running mates and family in support of breast cancer research that kept my mind on finishing. Together we managed to raise in excess of $1 500.00 and I’m so proud of everyone who made that possible. I even put my RAC pride aside and wore pink on the day!

For the record, I managed to break five hours by just four seconds. Eish, that’s a personal worst for someone who generally breaks four hours and a long way off my PB of 3:26! But I’ll take it.

Rory has completed twelve Comrades Marathons and has run the New York and London Marathons for charity. He is a former bodyguard to President Nelson Mandela and now owns a security consultancy with Bob Nicholls, his business partner. Nicholls Steyn and Associates is South Africa’s largest executive protection employer.