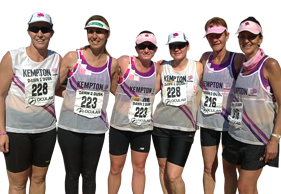 Kempton Road Runners was established early in the 1990’s when several members of the Kempton Park Athletics Club became more interested in long distance road running and didn’t want to compete on the track any more. They started off with about 50 members and today their membership stands at approximately 250, with an average of 100 Kempton Road Runners that travel to the Comrades Marathon each year.

According to club chairperson, Elize van Staden, they concentrate mainly on road running with a strong focus on ultra-distances at the moment, but this is definitely not all. “We have a growing number of race walkers, trail runners and cross-country runners, and there are also a number of cyclists and triathletes in our club, though they cannot compete in their triathlons and cycle races as members of our club.”

CLUB LEGENDS
In its 20-year existence, the club has produced some top runners and a Comrades legend or two. Combine this with the sense of camaraderie one gets when you run for Kempton, and it’s no wonder the stripy, white vests from the east of Johannesburg have become a well-known sight at South African road races, and are sure to remain so in the years to come.

Some of Kempton’s best-known and most-loved athletes include Willie van Heerden, who was the club’s fastest athlete for many years, usually going home with most of the club’s trophies at the end of each year. George Bester was the club’s founder and administrator for many years, and helped build the club to what it is today, running 17 Comrades along the way. Michelle Joy held the national half marathon record for women for nine years after running the Cartoria Half Marathon in Pretoria in 1990 in a time of 1:13:24, and Esti Wittstock (member of the 4x400m relay team that currently hold the national record) and Lindsay van Aswegen (Comrades gold medallist) also wore the Kempton colours in earlier years.

At the moment, the club’s most successful Comrades athlete is Johan van Staden, with 21 silver medals, a bronze and a Bill Rowan, while 75-year-old Calie Beneke collected his 35th Comrades medal earlier this year. Though Calie has now retired from the Big C, Elize says he remains one of their strongest athletes, even at his ripe old age. His Comrades medals include 20 silvers (the last of which he achieved in 2003 at the age of 66), a best placing of 11th overall and a PB of 6:04. “He’s officially our man of steel!” says Elize. At the moment, the two strongest athletes in the club are Joby Taylor and Vanessa Bowman.

THE BUSINESS OF RUNNING
One of the club’s biggest events of the year is the Arwyp Medical 15km night race that takes place on the last Wednesday of January at their Barnard Stadium home ground in Kempton Park. “It is the perfect time for a 15km because everyone is back training again after the Christmas holidays, so it’s a good challenge at that time of the year. The race has previously been appointed as the best 15km of the year and even though it has rained just before or during the event for the past four years, it has always been very well attended and we’re extremely proud of the success we’ve achieved with it,” says Elize. “Saying that, if the country is ever crippled by drought, we’ll just host a race and it is sure to rain!”

They have a 4km and 8km time trial every Tuesday at the Barnard Stadium, with Saturday training runs that also set off from the clubhouse. Several different training groups are formed every year according to athletes’ pace and goals, and the beginner group that begins training every year after the Comrades has produced many a successful Comrades finisher. The club has also recently decided to support the local CASA CARITAS Home for the Mentally and Physically Handicapped and regularly collects food for the SPCA at club runs.

TIME TO PARTY
The Kempton Road Runners’ clubhouse is located at the Kempton Park Sport Complex at Barnard Stadium. They rent it from the local municipality and have made several amendments and improvements over the years, making it a wonderful place for socialising and all-round enjoyment time for all club members. “We’re a family club and while the parents run, their children can play in the long jump sand pits until they’re old enough to run the time trial themselves. We enjoy socialising together and often go camping in the countryside when we run races a bit further a field. We’ve been to Sabie, Nelspruit, Parys and Rhodes, to name a few, and these outings are great highlights. Our regular functions such as the pre-Comrades pasta evening and post-Comrades Aches and Pains party are always well attended and lots of fun, and we make sure all our best athletes get recognition, but also those regular Joes for their determination, service and participation,” says Elize.

But she adds that it’s all of these things that work together to create a club that people want to be a part of. “The club management consists of volunteers and we share all the work between the members. It has become like our second home, and the members are our friends. We have competitive participation in our club, but with more respect for each other’s accomplishments than just trying to beat each other.”