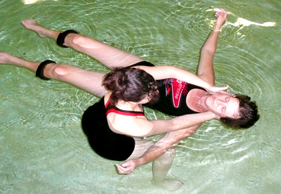 Aquatic Bodywork Hydrotherapy uses the mechanical and thermal effects of warm water together with passive bodywork techniques to massage, loosen, stretch and release muscles so that they recover faster. It is also said that Aquatic Bodywork can help improve athletic performance.

Since water transmits its temperature to the body 25 times faster than air, the tissues ‘warm up’ in a few seconds and are primed for stretching and bodywork. Deeper stretches can be achieved because of weightlessness and because fewer muscle groups are engaged that can restrict the stretch. The water provides the three-dimensional freedom that we don’t have on land in order to achieve this. The deeper the stretch, the more elastic the muscles and the better they perform. The warmth and weightlessness also lowers the risk of injury while stretching.

HOW IT WORKS
Aquatic Bodywork uses special floats designed to achieve neutral buoyancy in the water. Endurance athletes are usually sinkers, so hydrotherapists use floats under the legs, under the head, and sometimes under the chest to ensure that no muscle groups are engaged, the athlete’s body is aligned, and the deepest state of relaxation is achieved. This is further enhanced by the 34-degree temperature of the water, which calms sensory nerve endings, and the absence of other sensory stimuli – the eyes are closed, the ears are submerged and athletes can only hear the beat of their own heart and a few swirls.

Hydrotherapists encourage athletes to breathe deeper, especially during stretches. And usually people just let go. All these factors effectively calm the nervous system, and the parasympathetic mode kicks in much faster than usual. This is why half an hour is enough to achieve the results.

WHERE IT STARTED
In 2003 the physiotherapist of the Polish Olympic team, Tomasz Zagorski, began using Aquatic Bodywork Hydrotherapy on his athletes. They rested better, so they performed better – and won some gold medals at the 2004 Games. Later, after being invited to present his findings at the South African Sports Medicine Association’s conference in October this year, Zagorski asked Maria Gerondoudis to conduct a two-week study on endurance athletes so that he could include South African interviews in his presentation.

The athletes in the study received daily 30-minute sessions at the end of the day after their training. They filled in before and after questionnaires to gather information on their health, training habits, fatigue, anxiety, flexibility, rest, sleep, endurance and performance. Their blood pressure (BP), heart rate (HR) and heart rate variability (HRV) were taken daily and tabulated. “BP measures the pressure of blood on the arteries of the body. Athletes who maintain arterial pressures at the low end of the BP range have much better long-term cardiovascular health. They should therefore perform better for longer,” explains Maria. “We measured HR (rate of pumping) to see how hard the heart is working. The HR varies as the body’s need to absorb oxygen and excrete carbon dioxide changes. Generally speaking, the fitter the athlete, the lower the HR at rest.”

HRV is the interval of time between heart beats. Performance coach Partrick Ward says: “HRV is one method being used to evaluate the stress of the athlete and determine if they are in a more sympathetic or parasympathetic state, which would then guide the training programme for that day. Having a high HRV corresponds with a high Vo2max, while having a low HRV can be an indicator of increased mortality and possible cardiac events. In a nutshell, when HRV is high, this can be taken as an indicator of a parasympathetic state and being well rested. Athletes with high HRV scores are in better condition and are often able to recover at a faster rate following intense bouts of training and competition. When HRV is low it suggests sympathetic dominance, high stress and a potentially over-trained state.”

THE FINDINGS
The study showed that athletes felt less fatigue, less anxiety related to their performance, had greater flexibility, improved rest and sleep, fewer aches and pains as a consequence of training, improved endurance and better performance as a direct result of the intervention.
• After the first week, cyclist and long distance runner Anthi reported: “I felt like a machine on the bike today, I was the first in my group to get to the top of the hills and eventually I joined a faster group at the end. I did my personal best on this route today! So impressed.”
• Comrades runner and triathlete Lester Cary said his aches and pains as a result of training improved subsequent to hydrotherapy. “I suffer from plantar fasciitis and usually get up in the morning expecting pain in my foot as soon as I stand on it. I couldn’t believe it wasn’t there anymore. I feel great in my training.”
• Triathlete Eric Meyers, who will be participating in the Cape Town Ironman in a few weeks, reported longer endurance, better performance, improved flexibility and a marked difference in his rest and sleep: “This therapy helped me to let go and relax, both while in the water and also thereafter.”

“This research has key implications for both recovery from training or competition and rehabilitation from injury. It is ‘water-breaking’ stuff for South Africa,” says Maria. “It could very well become our secret weapon in international competitions. After all, if Polish Olympic athletes can win gold because of it, so can we.”

For more info visit www.aquaticbodywork.co.za or email Maria at aquamaya@gmail.com.