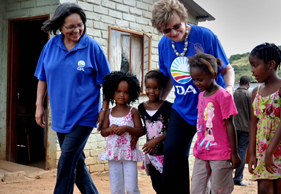 It’s been a long road for Helen Zille to end up in Leeuwenhof, the official residence of the Premier of the Western Cape. She started out as a journalist at the Rand Daily Mail newspaper in the seventies and became a thorn in the side of the Apartheid government when she uncovered the truth behind the cause of Steve Biko’s death. Since then she hasn’t stopped fighting against injustices and she moved from journalism into politics to carry on this fight.

After a long political career she served as mayor of Cape Town from 2006 to 2009 and received the World Mayor Award in 2008. She became leader of the DA when Tony Leon stepped down in 2007, and the party took over governance of the Western Cape when they claimed victory in the province in the 2009 general elections, with Helen elected as Premier of the Western Cape.

However, this position does not only come with the perk of staying in one of the most beautiful homes in Cape Town, but also with hard work, long hours, many meetings and bucket-loads of stress. She explains that no two days in her life look the same. “I don’t usually work less than 12 hours per day. Sometimes I get up very early, sometimes later; sometimes I go to bed early, sometimes late, it just depends on how pressing my deadlines are. I get home when I have finished my official engagements and this also varies.” So how does she keep up with her hectic lifestyle and stay on top of her game? The simple answer to this question is passion. According to Helen, the long hours and late nights aren’t a problem, because she is passionate about the prospect of South Africa becoming a stable democracy with a growing economy.

KEEPING UP WITH HELEN
“My mother always suspected that I was slightly hyperactive and I have managed to make it work for me. I also have very low blood pressure, which helps.” Exercise is not at the top of her list of priorities, but Helen says she tries to fit it in whenever she can. “When I hear the word exercise, I think of walking quickly to my car or running up two flights of stairs to my office in the morning. I love walking, and now that we’re at Leeuwenhof, I can go for a long walk around the premises. On holiday I enjoy taking long walks on the beach.” She has previously participated in the Discovery Cape Times Big Walk and says she will do something like this again, but a marathon or something like the Cape Argus Cycle Tour are out of the question.

The longest and most intense race she’ll ever run is an election race and she says she gets “pretty fit” during elections, mostly thanks to her incredible schedule and her love for toyi-toying at DA rallies. Though she doesn’t always have time to exercise, Helen says she knows how important it is to keep your life balanced. She says her greatest ambition at school was to get into a sports team, but she could never quite make it, something which probably helped her on her path to politics. “I tried every possible sport, especially tennis, but just failed to make the grade. I tried to get my dad to bring me to school 45 minutes early each morning, so that I could practise tennis, but I never made any team; ditto hockey and swimming. Eventually I managed to get colours for gymnastics, not because I was any good at it, but because I organised and coached the winning team.”

A LOVE FOR SPORT AND SA
Despite this, Helen still loves sport and she says she enjoys watching the Comrades and the Two Oceans Marathons and trying to figure out why others do it. She is also a big rugby supporter, and since last year’s Soccer World Cup, she has taken a keen interest in the beautiful game.

But her greatest drive, and the thing that keeps her going, is her love for South Africa and its people. “Freedom is a concept that inspires me. I would like South Africa to become a society in which everyone has the opportunity and the wherewithal to become the very best they can be.” One thing is for sure, Helen Zille will keep running her office until she has done everything in her ability to achieve this.