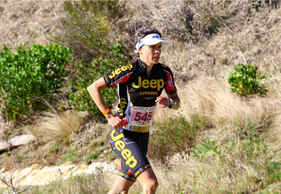 I did the Big 5 last year for the first time, but it was not nearly as well thought out in terms of organisation, which was much better this year, especially the new points system. The first Big 5 finisher in an event earned one point, the second finisher two points, etc, and the athlete with the least accumulated amount would be the winner. (Actually, only four events counted, but you had to just finish either the road bike or the paddle as your fifth event.) I think only about 50 people did it last year, but this year we had about 120 people participating, and I think next year there will be even more.

Facebook update: Big5 hunting about to start… with an oyster or two in the mix!

EVENT 1: PICK N PAY WEEKEND ARGUS ROTATY KNYSNA CYCLE TOUR 75KM MOUNTAIN BIKE
Time-wise, this was the longest event, and it was quite muddy and technical because it had been raining a lot the week before. I didn’t have the best ride, and it took me a while to find my legs, so I was lying about tenth at the King/Queen of the Mountain checkpoint 30 kays in, but then it got better. I finished fourth woman overall and first Big 5 woman. Mountain biking is my main thing, so I am competitive in these races, along with off-road multi-stuff like XTERRA. Still, I was fairly shattered after the race. I was thinking, oh shucks, this week is going to kill me.

EVENT 2: PICK N PAY WEEKEND ARGUS ROTATY KNYSNA CYCLE TOUR 100KM ROAD BIKE
Because I only had to finish and it didn’t count towards points, I just cruised with my friend and training partner Esther Lategan, who was also doing the Big 5. It’s quite an undulating route, but we were lucky that the rain had let up. Esther and I made sandwiches, stopped to buy Cokes and eat our sarmies in the sun, and we took about 3:45 to finish, while the leading women did about 3:10.

EVENT 3: SALOMON FEATHERBED TRAIL RUN 15KM
It was crazy how much it rained the night before the race – about 60 millimetres and thunderstorms all night. I lay there thinking, oh my hat, this is going to be insane. This is an awesome race, starting with a ferry ride across the lagoon to the Featherbed Nature Reserve. The first 4km are an insane climb to the communication tower on top of the peninsula, but then it flattens out before gradually descending, followed by a steep downhill to the railway and crossing the lagoon on the railway bridge. The section in the reserve is all single track and twisting trails on loose sand, and last year it was really hard work, but thanks to the rain the sand was firmer this year. My run went surprisingly well. I was fourth woman home overall and second amongst the Big 5 women, with only Roelandi Visser ahead of me, and after this race we could see who was in Big 5 title contention.

Facebook update: Solid run yesterday. Got 2nd Big5 lady. Still in overall lead, but it’s going to be a race! Holding thumbs for a solid XTERRA tomorrow. A bit of mud won’t do harm.

EVENT 4: DUE SOUTH XTERRA TRIATHLON
This was the race I felt the most pressure to do well in, as I was defending champ. It was a great day weather-wise, but the bike course was super muddy because of all the rain. I was happy about that, though, because I needed it technical so I could make up more time on the runners. After the insanely fast 3km run, where I just tried to limit my losses, I was third overall going into the bike, with Alae Brand first and Roelandi second. I caught them on the single track and knew I had to make up as much time as I could, so I went hard, coming off the bike first with a five-minute lead on Roelandi. Luckily, the runners were also struggling now and I maintained the gap, finishing in 2:03, with Roelandi doing 2:08 and Alae 2:11.

EVENT 5: PICK N PAY CAPE TIMES KNYSNA FOREST HALF MARATHON
I knew Roelandi was just 21 points behind me after the XTERRA and that she would do well in the half, so knew I would have to go as hard as I could to keep less than 20 Big 5 participants between us in the race. It therefore didn’t help that we had to stand around an extra hour because of delays with the taxi’s bringing runners to the start in the forest. It took a good 20 minutes of running before I started feeling my toes again – but by then everything was hurting, anyway! So imagine my surprise when I finished in a new PB time of 1:33, taking five minutes off my previous best, after that week! Roelandi ran a 1:29, so I knew there probably wouldn’t be many Big 5 athletes between us.

They released the results Saturday night and out of the Big 5 participants, Roelandi had finished eighth and I was eleventh, so I only lost a few points to her and still won by about 20 points, with Esther finishing third. We have a tradition in my group of friends that if somebody wins prize money, dinner is on them, so I paid that night! (Antoine van Heerden took the men’s title, ahead of Tim Ellerbeck and Christiaan Greyling.)