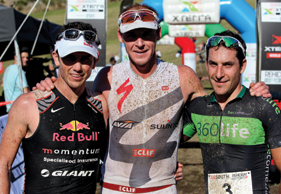 All the big names in XTERRA and the sporting community were out to compete in this much-loved event, which is also the only XTERRA SA event that does not feature a water discipline, but instead follows a run/bike/run format. The XTERRA full consisted of a 3km trail run, 23km mountain bike and 7km trail run. Forming part of the Knysna Oyster Festival, participants could take part individually or in teams of two. Four-time XTERRA World Champion Conrad Stoltz took race honours while Hanlie Booyens walked off with her second consecutive XTERRA Knysna win in the individual women’s category, crossing the line in 2:03:51.

For Lieuwe, who finished third in a time of 1:42:45, this event was an extra special experience as it was his last professional XTERRA race on home soil. He plans on shifting his focus to mountain bike stage races such as the Contego Wines2Whales MTB Race. “I have been racing at this level since 1998, so it has been a solid 13 to 14 years at the top level. I recently started my own consulting business and it has been going very well. I would like to channel some of the energy I have used on the XTERRA trails into my business and make it as successful. I am also getting married in December and want to spend a bit more time at home with my future wife. At the moment, between working and training, I am not sure what my fianc? looks like in daylight!

HIGHLIGHTS
Looking back, there have been many highlights in his career, but titles are always very special. “My first SA Short Course triathlon title in 2000 was the biggest of these. I was not having a great season and had not won a short course race that year. I rocked up on the start line as a definite underdog with the likes of Raynard Tissink, Glen Gore, the Storm brothers, Claude Eksteen and the who’s who of triathlon at the time. I swam badly but started picking off the guys on the bike. I got onto the run course fourth, but soon found myself running with some pretty quick athletes and then pulling away from them. It was a sprint finish for the line, and I was crowned SA Champ. I don’t think there is anything like winning a race you did not expect to win, especially an SA title. I won two more SA Short Course titles, two SA Student Champs titles, and was crowned SA Olympic distance champ and SA XTERRA champ.”

XTERRA LOVE
Lieuwe says he absolutely loves XTERRA races because of the superb organisation, the courses, the supporters, the athletes and the fact that it is home-grown and proudly South African! Though he would have loved to win the Knysna XTERRA this year, he is still pretty pleased with his third place finish.

“Due to work commitments, I have not been able to spend the time on my racing chariot that is required to beat uber bikers such as Conrad Stoltz, Kevin Evans, Dan Hugo and the like. I thus had to go as hard as I could from the gun and run like the race was only 3km long. This worked like a charm, as I came off the first 3km run first, feeling like a world champion. I was even in front of the team runners! On the mountain bike this feeling quickly evaporated – as expected – as first Conrad and then Kevin powered past me. It was damage control and limiting the time gap from there onwards. I came off the bike with a four-minute deficit and ran myself to within 30 seconds of Kevin. I never saw the Caveman, but if only there was one more kay… second place would have been up for grabs!”

The hardest part of the race for Lieuwe was being overtaken by Conrad and Kevin and knowing he was losing time and could not do anything about it. And the best part was coming off the 3km run first, running hard, the crowd cheering and just loving being an athlete in the moment where life is good. “Those moments are awesome.”

LONGEVITY
Lieuwe made the shift from conventional road triathlon to the more extreme XTERRA triathlons a couple of years ago. “In 2000 I qualified for the Olympics in Sydney, but was not included in the team. I tried again for Athens in 2004, and again was not picked. I thus decided it was time for something new, where your fate was not in the hands of administrators. My only triathlon regret is that I did not start XTERRA in 2000 already.”

He has been one of the top XTERRA athletes since making the move in 2004 and says his secret to longevity in the sport is to love what you do. “If you do not love what you do, and that includes the pain, you won’t last long. XTERRA has been a lifestyle for me, and I loved every second.” He loves running, and specifically trail running, and describes himself as an ‘ok swimmer’ who can swim with the front guys, but cycling has always been his weakest link. “I just do not have the time it takes to spend in the saddle in order to win. I find myself always suffering on the bike, which makes it very unpleasant.”

ADVICE
Lieuwe’s advice to athletes wanting to get involved in XTERRA is simple: “Go buy that mountain bike…yesterday! It is difficult when you start. I can still remember my first year of mountain biking and it was not great. It takes time and you are going to fall. That is just the way it is. But when you get it right and you start taking those jumps, drop your friends on the single track and go ride your bike in places you normally only see in magazines, that’s when it is all worth it.”

He is inspired by people who do not give up, ever! He can’t imagine his life without sport and plans to go overseas for one last international XTERRA, before moving on to the Contego Wines2Whales MTB Race. “Then I am getting married and going on honeymoon…without my bike! I do not think I have ever travelled without a bike and I’m 35 years old!” He is also very grateful to his sponsors for their awesome support throughout the years. “Red Bull specifically has been with me from the start and gave me the wings to live my dream.”