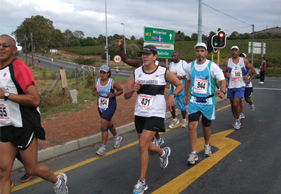 In 1903, Spartan Harriers organised its first 50-mile Big Walk, with 61 competitors starting at Greenmarket Square, proceeding along what is now Voortrekker Road to the 25th milestone and back. Future rugby Springbok WA Millar won in a time of 9:23:29, pulling away from JW Lewis at Salt River after reportedly drinking champagne! Unfortunately, the club made a financial loss that day, so it would be 21 years before the second Big Walk, which happily made a profit, and the event has subsequently grown into one of the biggest athletic events in the country. Nowadays, over 35 000 walkers turn out in one of the eight distances from 80km down to 5km.

The club is no longer directly responsible for the event but is still very much involved, says Spartans Vice-chairman Dave Kirby, who serves on the board of the Big Walk Trust. “The Big Walk was started by Spartans, is still run under the auspices of our club, and our members still help on race day, so we still think of it as our event.” And that seems rather appropriate, given the club’s strength in the walking category, including having won the Western Province Road Walking Challenge every year except one since it was launched in 2003.

GLORY YEARS
Spartan Harriers was formed on 26 April 1901 when a general meeting took place at the Cumberland Hotel for the purpose of forming a Harriers club “to foster cross-country running and promote athletics in general.” Besides that first Big Walk in 1903, it also presented the first marathon in South Africa, in 1907. The race was won by Chas Childs of Spartans in 3:12:55, and there was so much public interest that the crowds stood up to twelve-deep in places along the route! Another landmark date saw the Ladies’ Section formed in 1926 and women allowed to compete in the Big Walk for the first time.

Spartans became a force in Cape athletics, winning the Western Province cross-country team championship 27 times between 1906 and 1940, amongst other titles, but the club’s star waned somewhat until Ewald Bonzet joined in 1972 and set various national records and won numerous national and provincial titles as a Spartan. Other notable performers included walker Connor Johnstone, who set several age group world records in the 70s, the famous ‘Galloping Granny’ Mavis Hutchinson, who joined in 1988, and John September and Thabang Baholo, who dominated the Western Province racing scene in the early 90s.

Today the club can boast a number of top walkers, like Ross McDonald, who won three medals at the 2009 World Masters Championships in Finland, and Peggy Reid, who at the age of 74 won the Western Province Road Race Walking League Challenge for the second year running. The club also has a talented father-son duo in Malcolm and Alphonsus Salida. Club President Malcolm was the first walker home in the Two Oceans Marathon for the last two years and in the 2010 Comrades, while 16-year-old Alphonsus has walked the fastest 10 000m in South Africa this year for youth boys.

FAMILY ATMOSPHERE
Spartans currently has about 300 members, with a diverse age spread, says Chairman Maajid Warley. “Our youngest athletes are eight years old, while our oldest are walker Sam Milner and runner Ralph King, who are both still active in their 80s. Our average age used to be quite high, especially when the legendary Philip Rabinowitz was still with us – you’d be amazed how much one 103-year-old can affect the average!” (The late Philip famously broke the world records for 100m and 200m for the 100-year-old age category in 2004 and is listed in the Guinnes Book of World Records.) Malcolm adds that “The family atmosphere really attracts many people to the club. It is amazing to have such young and old athletes together in the same room, with such a great vibe.”

The club’s training runs, time trials and social functions all take place at its clubhouse on the Meadowridge Common Sports Grounds, with pack runs and walks on Tuesdays and Thursdays, and longer sessions on Saturdays. There are also speed training sessions on Mondays and race walking training on Wednesdays. “We have experienced coaches and try to cater for all levels and ages, and we offer separate routes for the walkers because they generally prefer flatter routes,” says Malcolm.

The 5km time trial takes place on the first Thursday of each month, followed by a monthly social where the Spartan of the Month award is announced. Other social highlights include the Chairman’s Breakfast Run (which often includes a swim), Two Oceans Breakfast Run a week before the race, pasta evenings, Birthday Bashes on the last Saturday of each month, Section Socials, the Annual Club Dance in September, and the Pub Run in December. The club’s AGM and Awards Evening usually takes place at the end of April.

GETTING PEOPLE ACTIVE
Spartans is one of the leading clubs in the Cape in terms of bringing beginners and underprivileged athletes to the sport, says Maajid. “We have two beginner groups each year, one in February and one in September, and we also have a talented development squad based in the Masipumelele community near Kommetjie, which is run in conjunction with the Western Province Race Walking Commission’s Adopt an Athlete Scheme. We were the first club to buy into this scheme, starting by funding 10 athletes, which has grown to 42 now.”

“The funding for this development work comes from the Big Walk Trust,” says Dave. “Part of the Trust’s mandate is to reinvest part of the profits of the event into the community, so the club has created a fund to send coaches to Masipumelele three times a week, buy the kids shoes and kit to train in, and also organise outings for them. It’s our way of giving back.”