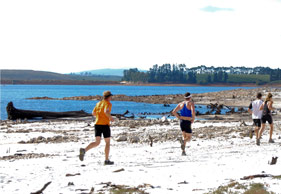 This is my first season racing as a full-time professional athlete. It definitely has its bonuses, such as the amount of training I can put in along with the time I can take to travel to an event such as the XTERRA. However, the one drawback is that there is a lot more pressure when it is your job and no longer a part-time hobby!

After finishing fourth at Buffelspoort, I realised that my bike and run training were really taking effect and I was beginning to feel confident to race the other top guys. Although I was lacking on the swimming side of things, I come from a lifesaving and school swimming background and I’ve always relied on my natural ability in the water, but when racing with the best in the world, I still have a lot of work to do.

PREPPING FOR THE BIG ONE
For XTERRA Grabouw, I decided to head down to the Cape a week early. It’s always difficult to travel so far to a race because good-tasting ‘padkos’, like chips, biscuits and other goodies are never good for the body, so I packed a cooler with broccoli and spinach – but I ended up buying loads of junk along the way to help stay awake through all the road works on the N2!

My week of race prep was great on a physical level, as I followed exactly what my coach, Lucie Zelenkova, instructed me to do. However, I did struggle with my diet a little, as I ended up eating out a bit with friends and family and not putting in all the good things I should have.

RACE DAY
Despite my dietary lapse, I was firing on all cylinders on race day, and I would need to, as the competition was to be the best I’d ever seen in South Africa, with Conrad Stoltz, Dan Hugo, Kent Horner, Lieuwe Boonstra and Nico Pfitzenmaier (Germany) just a few of the big names that I was up against. I arrived in Grabouw with perfect timing and after setting up my bike, I was off for a quick warm-up jog and stretch. Then I grabbed my suit and ran off to the water’s edge.

Fifteen minutes before the start I asked to be zipped up to go loosen the muscles with a swim and found my zip had popped, so I whipped the suit off and desperately tried to fix it. Carla van Huyssteen kindly offered to help, but with five minutes to go I couldn’t see us winning, so I ran off to the XTERRA Wetsuit stand and managed to lend a suit. I arrived back at the start with thirty seconds to spare, and with hands shaking and heart through the roof. The gun went and the first 1000m it seemed like I was just fighting the water. By the time I settled into my stroke, I had already lost precious time on the lead pack.

MOUNTAIN BIKING BLISS
I went onto the bike lying around twelfth, but I was really looking forward to it, as I’d ridden the course during the week and absolutely loved it. It’s not what us KZN boys are used to, as most of our riding is hard-pack stuff where tyres grip to the surface. This course was soft and sandy, with plenty of rock thrown in. It made it really tough, but at the same time super fun. I enjoyed every moment of the bike – from the forest single-track to the hair-raising rocky descents, it was pure mountain biking bliss!

By halfway I had worked my way into sixth spot and on the big climb could see all the way to third. I managed to catch up to Lieuwe, but just couldn’t close the gap and went onto the run around one minute down, with Tyrone White and Nico a further two or three minutes ahead.

GRUELLING RUN COURSE
The run course was gruelling, as it goes straight up and down the mountain and traverses loose gravelly terrain. Also, the temperature was into the 30’s by then. I set out with the mission of catching Lieuwe, who initially started to pull away but then tired. As we neared the summit of the climb, I turned up the gas and make my legs feel the hurt a little, then I gave it all I could on the treacherous downhill, covered in loose rock. As I neared the bottom, however, I saw I had hardly dented his lead.

We hit the beach section, which in previous years had been my worst part of the race, but this year I was determined. I started the sprint with around 300m to go. I buried myself hoping to catch him, but as I closed in with 10 metres between us, the crowd came alive and he managed to muster a sprint to the line, just enough to hold me off. Great fun to have a finish like that and know you’ve given it your best.

It was an amazing event and well worth the trip from KZN. The organisation was second to none, with the REHIDRAT? SPORT Recovery Zone the best in its class. DUESOUTH and Stillwater Sport can really be proud of the way things went and the professional way things were handled.

NEW CHALLENGES
I will now refocus and prepare for a couple of mountain bike events, such as the SA Marathon Champs and hopefully Joberg or Sani2C. I’m also going to try something a little different this year and maybe give the ProNutro AfricanX Trailrun a go. It looks like an amazing event and after having a good race in the Otter last year, I realised how much I enjoy running on the amazing trails in these races.