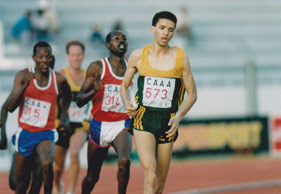 In 1994 Johan Landsman was at the height of his athletic powers. The year before he had set a South African national record of 3:33.56 for 1500m in Zurich, Switzerland, won the SA title for the third year running, won silver at the African Champs for the second year running, and earned a world ranking of sixth for the 1500m. But then he lost his motivation to run competitively, and while he remained on the circuit for another two years, his heart was no longer in it, because he says he knew too much…

“One of my biggest disappointments came after 1993. I was getting invites to race against the best in the world at the big Grand Prix meets in Europe, I got a sponsorship from Reebok, and I fancied my chances of making the top four in the world rankings, but when I went back to Europe, I discovered how big drug abuse was in the sport. I was perhaps a bit ignorant – I thought everybody was using Berocca to recover, like me.”

“I realised it would not be possible for me to become number one or two in the world without drugs, but I took a moral decision not to go that route, so halfway through the 1994 season I just wanted to go home, and I would have if not for my contractual obligations with Reebok. I saw out the season, but my motivation was gone. By 1996 I had a problem with my Achilles – the typical middle-distance injury – and that was the end of my competitive career. I was 31 by then anyway, so my best days had passed.”

BALANCING ACT
Born in 1964, Johan was initially raised in Cape Town, but the family moved to Ashton in the Boland when he was in standard four, when his father became one of the first coloured owners of a farm. Johan came back to Kraaifontein for high school, then enrolled at the University of the Western Cape in 1984 to study law. He experienced some difficulties with his studies, missing most of the 1985 academic year due to student boycotts, which forced him to repeat his second year in 1986. When he completed his studies in 1987, he went to work for a law firm in Cape Town, but that was short-lived thanks to running.

It was only during his first year at UWC that Johan began running, and it happened purely by chance. “I never ran at school. My passion was tennis, and I dreamt of being ranked on the ATP list and playing on Wimbledon’s Centre Court. But then one day, during a break in classes, I went to watch an athletics meeting on campus and saw an under-17 3000m race. There was this one guy in the race who was overweight and had one knee strapped, running at the back of the pack, but as the race went on he got closer to the frontrunners. I said to myself, if this guy wins, then tomorrow I start running, because if he can run well, then with my build I simply must start. He kicked at 150m, won the race, and I became a runner.”

“So I focused more on athletics and less on tennis for the next three years, and began to dream of being the best in country and competing internationally as an athlete. However, at that stage I couldn’t break four minutes for the 1500m, while the SA record was Johan Fourie’s 3:34, so I must have sounded like an idiot telling people I wanted to be the best!”

TOUGH CHOICE
After just one year at the law firm, Johan then had to make a hard decision, because he was finding it impossible to balance his training with a full-time job. “My dad had funded my studies through a bank loan, so after my studies, I had to pay him back, and since my younger brother was now studying, I simply paid for his studies. So I had to talk to my dad about quitting, which meant I couldn’t pay back the loan, but I had to be honest with him that I wanted to pursue a full-time athletic career.”

For the next two years Johan put everything into his running while working part-time to makes ends meet, and there must have been some sign of great things to come, because to his great surprise he was approached by the University of Stellenbosch and offered a full bursary to study and run for Maties, alongside Elana Meyer. “At the time, I was 25 and my PB for 800m was 1:52, while my 1500m was 3:57, so it didn’t make sense for them to approach me and pay for my studies. Elana and I had the best bursary deals in Stellenbosch – they paid for our studies, accommodation, travel, even a car. I just had to study and run.”

Johan grabbed the opportunity, enrolling for a course in political science at the beginning of 1990, and now his running really took off. He ‘doubled’ at the SA University Champs that year, winning gold in both the 800m and 1500m, and setting a SA Universities record in the 1500m that was only broken a few years ago by Johan Cronje. Later that year he fulfilled one of his greatest ambitions: “I had always dreamt of becoming a Springbok athlete, so it was one of the highlights of my career when I qualified for my colours, at Coetzenberg, running a 3:33.8 against top runners like Johan Fourie, Deon Brummer and Jean Verster.”

INTERNATIONAL COMPETITOR
Johan won his first SA title early in 1991, then found himself thrust onto the international stage that October as South Africa was finally readmitted to international sport in the African Unity Games in Dakar, where he claimed silver in the 1500m. Suddenly, Johan had the 1992 Barcelona Olympic Games to aim for, so he quit his studies and accepted an invite from close friends Elana and Michael Meyer to live and train with them in Teddington, England. “I stayed free of charge, without the Meyers asking me for a cent, and I will always be grateful to them for that. It was terrific, because we had top Kenyan athletes like Moses Kiptanui and Daniel Komen living just three houses up the road, and often trained with them.”

He took gold at the SA Champs in 1992, then silver in the African Champs in Mauritius in, but narrowly missed out on qualifying for Barcelona, by mere hundredths of a second. Putting that disappointment behind him, Johan went on to win another SA title in 1993, then another silver in the African Champs (this time hosted by South Africa), and then he set his SA record in Zurich, just two weeks before the World Champs in Stuttgart, Germany. “That 3:33.56 I ran was faster than the Kenyan national record, so suddenly I was getting invites to all the top meets.”

Unfortunately, the World Champs would prove to be a huge disappointment for Johan. “I was tripped in the qualifying round and injured my ankle ligaments when another athlete accidentally stood on my foot. The South African runners were perhaps a bit na?ve then – top runners like myself and Elana had little competition at home, so we had no experience of running in a bunch at pace.”

Another setback occurred at the 1994 Commonwealth Games in Victoria, Canada, where Johan went into the 1500m as one of the favourites, but in the heats he once again found himself lying injured on the track. “With 150m to go there were still six or seven guys bunched together. I tried to get out of the bunch, was knocked down, and one of the guys stood on my back with his spikes. I ended up spending the night in hospital and missed out on the chance to claim a medal.”

POST-RUNNING CAREER
Having retired from international competition in 1996, Johan turned his attention to the business world, starting up a successful long-distance transport company, then adding a sport company called Johannet International Sport. Today it presents training courses for athletes and coaches, built around a sports diary that includes great training info and advice, and the venture has met with great support from local government and corporate sponsors.

Johan also started Johannet International Commodities, a marketing and trading company that specialises in brokering deals between gold producers in Africa and gold buyers in Europe and the USA, as well as negotiating deals between large international corporations and governments, and local land-owners or mining companies, for other industrial commodities such as oil, gas, coal and iron ore.

STILL RUNNING
While his various business ventures keep him busy, Johan remains involved in running, as a coach. Still living in Stellenbosch, he meets up with his training group in the evenings at the Coetzenberg track and often trains with them. The group is mostly female, and includes top junior middle-distance runner Dominique Scott.

Johan also did a bit of road running in his day, mostly as off-season preparation for the track, and has a 10km PB of 29:06. However, he also has unhappy memories of the road. In December 2000, he was badly injured when hit by a car while sprinting for the line in a 10km race in Bellville. “The driver ignored the officials and just went through a stop point. I was knocked unconscious and suffered a bad back injury, and one of the doctors on the scene later told my brother that the impact was so huge, he didn’t think I would make it. I was actually in training to run a sub-four minute mile at the age of 40, which no-one had managed outdoors, only on the indoor track, and my training times showed that I was really close, but the accident prevented me from going for it.”

Johan missed running, though, and in 2003 he decided to make a comeback. In 2005 he finished as second male veteran at the SA 10km Champs, and in 2007 won the Western Province 4km Cross-country Champs. Now he says he just runs to keep fit and enjoys training with his athletes. “Most of them are girls, so it’s easy to keep up with them,” he chuckles.

RECORD UP FOR GRABS
The record books show that Johan’s 3:33.56 SA record has now stood for nearly 18 years. He has mixed feelings about the longevity of his record. “Bruce Fordyce once said a smart thing: ‘Records you borrow, titles you keep.’ My SA Champs wins in 1991 to 1993 are mine for keeps, but my record will go sooner or later. Actually, it’s more than a decade overdue to go. I think both Johan Cronje and Juan van Deventer are capable of running 3:31, and both could still break the record before the London 2012 Olympics.”

However, Johan adds that if it weren’t for the isolation years, the record would already be much lower. “I believe that if Johan Fourie been able to race internationally in his peak years, the record would be 3:29 now, because he had the ability and mental make-up to win global champs. He also ran a 3:33, and although I went faster, I still consider him the all-time greatest SA middle-distance runner. His name established my name, because if he had not been so well known and respected, my name would not have become as well known.”