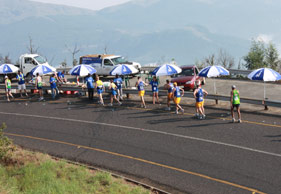 In 1979 Nelspruit was a small, sleepy town developed mainly around the surrounding agricultural activities. It was during this year that a few of the locals’ rugby careers came to an end and they discovered running. On 6 March, Piet Smit and five friends took the plunge and established the town’s first running club, the Nelspruit Marathon Club. Piet was subsequently chosen as their first chairperson.

Since then, things have gone from strength to strength as the club grew together with the fast-developing town. Nelspruit was transformed from a sleepy Lowveld hide-away to the political capital of Mpumalanga, and its population sky-rocketed. With this, the inevitable happened as a new shopping centre appeared every year: In 2002, the site of the club’s old clubhouse was bought as land for a new shopping development and the club had to look for new pastures. Luckily, it didn’t have to look far, as the old Jukskei clubhouse was vacant. Today, it is still located on these premises, just behind the Crossings Shopping Centre and the Virgin Active, and it rents out the building frequently for private functions.

PROUD LOWVELDERS
Over the years a few big names have come from the Nelspruit Marathon Club, but the biggest one is undoubtedly Josiah Thugwane, South Africa’s Olympic marathon gold medallist and its first black gold medallist. Another big achievement for the club was when Chris Reyneke finished in third position at the Comrades Marathon in 1984.

Samuel Makamu has been the club’s top runner for about six years on the trot, and together with Norma Crampton, qualifies for the SA Championships every year. Rueben Malatjie, Jafter Sithole, Tewie Maree, Madelein Whitehair and Allison Hay are others that perform well on a regular basis.

Last year 58 Nelspruit runners completed the Comrades, with Johan Visagie proudly running his 25th, Christo Human his 21st and Forrester Schoeman his 20th. Though this year’s entries are not finalised yet, you can be sure the blue and gold will once again arrive in their droves to take on South Africa’s premier ultra-marathon.

SOCIAL TIMES
The clubhouse is also the site of the weekly time trials. On Tuesdays and Thursdays at 5:45pm, members can choose between the 4km and 8km time trial that takes them around the Crossings shopping complex and back to the clubhouse. When there is no local race, weekend club runs take off on Saturdays from the Virgin Active. However, according to club chairperson Mari?t Erasmus, the highlight for most members is the frequent braai’s that happen after the running. “Most of the club’s members are always ready for a braai – it only takes one person to say the word ‘wors’ or ‘braai’ after the time trial and the deal is done. Club members’ birthdays also turn into an event most of the time, and before you can say ‘free snacks’ the party is well and truly underway.”

On top of these spontaneous socials, the club also has a regular braai on the last Thursday of every month, where local running retailer, The Running Shop, sponsors a R500 spot prize and the club members’ families join them for a relaxing evening under the Lowveld stars.

A regular highlight on the club’s calendar is definitely the Loskop Ultra-marathon, as most of the club’s members pack their tents and sleeping bags and head through Schoemanskloof for their annual club camping weekend at the Loskopdam. During this weekend, a lot of socialising takes place as they throw a lamb on the spit and just have a goo,d time. The party is usually extended to the Sunday morning, when everyone puts on their specially made Loskopdam T-shirts and walks down to the dam to share a glass of sherry. Though this event is called the Sunday Sherry Run, not much running takes place, as everyone from toddlers to geriatrics takes part; it is simply a fun event before they head back to the daily work grind.

WORKING HARD
As with all clubs there are a few loyal members who are always willing to help at every race and time trial. The ‘drinke-broers’, as they are known, are Marius Kruger, Anton Kruger, Marius Botha, Marius du Plessis, Lian van Kradenburg, and Guy and Anita McGary. According to former chairman, Aurthur Meneke, these are the people who are at every event and get everyone else up and running when it is most needed. He jokes that Nelspruit is like a tractor that struggles to start, but once it is started, it works hard and things get done without fail.

This was evident at the recent hosting of the PWC 3-in-1 event, a very successful marathon attended by runners from as far as Gauteng thanks to it being mostly downhill, and therefore a very useful Comrades seeding race. Next year it promises to be even better as it is set to finish at the beautiful Mbombela World Cup stadium. The club also hosts the popular Rudamans Kaapsehoop 3-in-1 in November and a couple of smaller races like the Wake-up & Shake-up 10km and Powerade 10km Nite Race.

But the ‘drinke-broers’ are not the only club members who work hard and Mari?t explains that the club has been divided into worker-teams so everyone has a turn to keep time at time trials and work on race days. This, together with the division of the club into different leagues with their own captains, helps them to get the work done on race day and to keep everyone informed of new developments.

The ‘old faithful ladies’ are also always ready to give a helping hand if there is a crisis, and between Thea Pretorius, Heleen Jacobs, Amelia (die BOM) Mar?, Liana Visagie, Altie Human, Suzette Meyer, Daleen Taljaardt, Elmarie Kruger and Cecilia Botha, things are sorted out before you know it. Usually, the rest of the club isn’t even aware that there was a problem! Mari?t is excited about the club’s future and says the new generation is slowly but surely coming into their own and following the older members’ lead to show they can also get the work done.

TOUGH TIMES
Nelspruit’s members are known for sticking together. When three women in the club were diagnosed with cancer within three months of each other, the club decided to get involved with their local CANSA office. Most club members shaved their hair in support of their clubmates and also to encourage them to still join in at the club, something that brought the club members a lot closer to one another. Sadly, they lost Cathy Sales to cancer during this time. Today, the club still supports CANSA initiatives. Another worthy cause it supports is Childline: Club members take part in a sock run where runners donate their socks to be used for hand puppets to entertain children. All proceeds of Powerade sales at the Powerade 10km Nite race are also donated to Childline, and Mari?t says they hope to really make a difference to those who need it.

SOMETHING SPECIAL
According to Arthur, what makes this such a fun club to be a part of is the fact that everyone is important and everyone gets treated equally. “Even though we are competitive, we are also social, and the members enjoy having a beer together and just enjoy each other’s company. We have quite a few new members and there is always a nice atmosphere at the club.”

And, says Mari?t, there is one other thing that makes them stand out from the crowd: “Our running gear! You won’t miss our blue vests and gold shorts easily!”