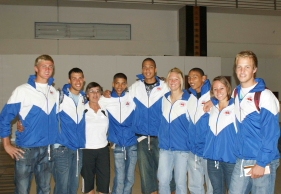 There are two strong track and field clubs in the Western Province, Tygerberg and Bellville, and Mariana says it is all about coaching. “There are not enough coaches around, so people go where the good coaches are.” And the coaches at Tygerberg are good – the club won 17 titles at the last Western Province senior champs. Then at the SA Senior Champs, Tygerbergers brought home three of the four medals won by Western Province athletes, including a bronze in the women’s 400m by junior Sonja van der Merwe, who also claimed the SA Junior 200m and 400m titles last year.

At the most recent Western Province Annual Awards, the club also took home both the men’s and women’s Athlete of the Year Awards, which went to Sonja and javelin thrower Rocco van Rooyen. “They’re both SA Junior Champs, and Rocco went to World Junior Champs and came fourth,” says a proud Mariana. “We also had Travis Ishmael finish fourth in the national champs 400m, but he is also a good rugby player and has been bought by the Blue Bulls. Now they’re also after Justin Geduld as well.”

“Track and field unfortunately can’t compete with rugby, especially in the past three or four years due to all the problems at ASA. But I have full confidence in the people now in charge. I think they will be able to pull us out of this ditch. I think one of the big things that we need back is team competition, because it is exciting and athletes are pushed to go harder. That’s why I’m very excited about the inter-provincial meetings ASA have reintroduced to the calendar this year.”

YOUNG STARS
Triple jumper Jason Sewenyana, who also won bronze at the SA Champs, strides powerfully down the tartan track, leaping high as he practices for his specialist event. He’s a full-time qualified lawyer, and has to fit his training and competition in around his work. “I’ve got used to having a full work and then still coming to train. I enjoy it and look forward to training, although it does mean I hardly have a social life. But I have to train hard, because I want to make the All Africa Games team later this year, and want to medal again at the SA Champs.”

Nearby, a group of sprinters is taking a quick breather between sets of 150m sprints. Sonja van der Merwe, Alet van Wyk and Lynette Morgan have all competed at provincial level from 100m up to 400m. “I like training here, because the people are so friendly and considerate,” says Lynette, who originally hails from Sweden and is now studying Mandarin at Stellenbosch University.

Sonja, who is studying Sport Management and Coaching at Northlink College, says that her big dream is to go to the Olympics, but this 18-year-old has a wise head on young shoulders. “I’m setting myself manageable stepping stones as goals. This year I want to make it into the SA Student Team that’s going to China, and then each year I will set myself a new goal.”

Alet, on the other hand, has another goal in mind. She wants a gold medal, having brought home a sizable collection of silvers and bronzes at national champs during her track career. “They must watch out for me this year, because a gold is the only one I don’t have!” she says, having claimed the silver medal in the 400m, just ahead of Sonja (but running in the colours of Gauteng North, because she was studying in Pretoria at the time). Now working as a physiotherapist at Panarama Hospital just up the road, she has to balance her full-time practice and being on call for the orthopaedic ICU ward with her training. “It’s challenging and sometimes frustrating, but I love what I do, both at work and on the track.”

DREAMING BIG
Meanwhile, After 40 years steering the Tygerberg track and field ship, Mariana is still just as motivated as ever to keep coaching. “There’s always that one athlete that is going to make it, that you have to help. I often think I will retire when a specific athlete retires, but then another one comes along. My one big dream is still to see one of my athletes medal at the World Champs or Olympics.”