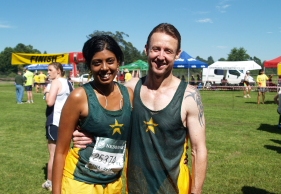 We entered the race together and I followed the programme religiously, only missing one session! I couldn’t wait for my magazine copy to see what Derick was planning for us next. Well, today I can proudly announce that I completed my first Ironman 70.3 in 7:36 after a very tough and challenging day. Derick, thank you very much for helping me achieve one of the best moments in my life! – NINA DU TOIT

Thank You, Cape Runner!
I would like to say a huge thank you to Colin at Cape Runner. I run in Vibram FiveFingers Bikila’s but needed a road shoe in which to do longer distances. After trying on a few pairs, running up and down under Colin’s watchful eye and getting told I can’t run in those specific shoes my heart sank. Then he disappeared and came back with a pair of Saucony Kinvara’s. Colin, you definitely know your running shoes! What an amazing shoe! Colin and Lionel, thank you very much for your expert help. It’s really great to go to people who run and know their shoes. – KAREN ERVENS

To Run or Not to Run
Saying that I have low self-esteem is an understatement. Combine that with the fact that as a 33-year-old, I never did any form of exercise before last year, and you get a recipe for disaster!

Last year, my better half and I dabbled with the idea of road running. He is super-fit and eased into it. I faced challenge after challenge. My challenges were never physical challenges, but rather emotional. I would set my goals too high and beat myself up when I didn’t succeed. I would expect to run a 10km race without stopping at all, and then be hard on myself when I couldn’t do it. I struggled with my breathing. I couldn’t find a comfortable pace, I cried inside when I saw older runners and even walkers overtake me in a race. I was convinced that running was not for me.

About two weeks ago, the Garmin watch that I won in a Modern Athlete online competition arrived. I told my better half that he could have it. And then he told me how brilliant it was. Last Sunday, I convinced myself to do a 25km race. I spent the night before lying awake in bed, questioning my sanity. Then on Sunday morning, armed with my beautiful new watch, I braved the race. To say that this was my best race ever was an understatement. With the help of my new best friend, I was able to pace myself well, and didn’t stop/walk at all through about 22km of the race. I finished in 2:44. I achieved what I didn’t think was possible, and that was, that I was finally a runner.

When I won this competition, I was so excited, saying that I won an expensive watch. Now I say I won my belief in my ability to be a runner. I realised a lot of the challenges we face are merely battles in our heads. Thank you, Modern Athlete, for giving me that. Now when I run, I will be armed with my Garmin watch and an overwhelming confidence in myself. – OLGA THANGAVAY

Inconsiderate Runners
My father is an anaesthetist who was called out to assist with an emergency caesarian section on the morning of the Dischem Half Marathon on 16 January in Bedfordview. On Kloof Road he was edged forward by the marshals after waiting patiently for the road to clear, having made the traffic officials aware of his predicament. As a group of runners brushed past his vehicle, one chap pushed his side mirror in and rudely banged on his boot. My father was incensed by this blatantly rude behaviour. I must stress that this was at 8:30am, so these were by no means elite athletes! It is a shame that a few inconsiderate individuals create such a negative impression of runners. Sadly, the baby was delivered lifeless. – MIKE ALISON