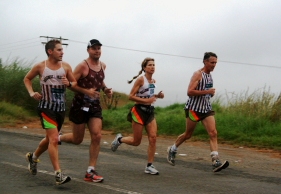 If you happened to be in Kwazulu-Natal 33 years ago and you happened to stumble into the sleepy village of Hillcrest, you would have found approximately 20 sweaty runners enjoying a braai after a 10-mile (16km) run. Little did anyone know that on that spring day a tradition was started, because today when you arrive in Hillcrest on any given Thursday, you will still find a group of about 80 runners gathered around a braai. They are all proud members of the Hillcrest Villagers Athletics Club.

HUMBLE BEGINNINGS
In 1977 the club started out with only 20 members, 2 women and 18 men, and not all of them were runners! Since then things have changed and as Hillcrest has grown from a sleepy village to a thriving suburb of the sprawling municipality of eThekwini, the club has grown in numbers; today they have more than 300 members.

From the start, the club wanted to be different: they deliberately chose brown and white vertical stripes for their running vests. Not only did these colours stand out, but club members liked the fact that they were one of the only clubs with vertical stripes, as most other clubs chose to go horizontal in the seventies. Since then the ‘brown and white’ has become a well-known sight at most local races, but come Comrades day the number of brown and white vests on the road increases exponentially! In 2010 Villagers was the KZN club with the second most entrants at Comrades: 128 Villagers finished and this year promises to be another repeat as more than 100 Villagers have entered.

COMRADES BOND
Because of the club’s location, slap-bang in the middle of the Comrades route, Villagers has had a long and fruitful partnership with this historic race. It only took three years after the club’s launch before they won their first Comrades silverware, the Gunga Din Trophy, which is awarded to the club team with the fastest combined time for its top four finishers. They went on to win the trophy in three consecutive years, a feat that has never been achieved by another club. One of the members of the team was Tony Abbott, who managed third overall at the 1981 Comrades, being beaten only by the legendary Bruce Fordyce and Johnny Halberstadt.

As with many clubs in South Africa, Comrades takes priority during the first half of every year, and those who have entered this year’s race are sure to receive quality support during their training, whether they’re going for a silver medal or just aiming to finish. Workshops on issues such as diet and injury treatment are held regularly, and then add well-organised weekend training runs and different training programmes and you have a club with Comrades success in its sights. But activity at the club certainly doesn’t come to a standstill once the cut-off gun has been fired on Comrades day.

The Rhodes Marathon, cross-country races, time trial challenges, 100 milers and other endurance and multi-sport events in the area remain popular pastimes for the Hillcrest members during the rest of the year. They host their own Triple Challenge, consisting of the Comrades, the Longest Day track event in Durban and the Midlands 100 miler. This challenge was won by Barry Trevor-Roberts last year after he won the Longest Day, came second in the Midlands 100 miler and received a silver medal at Comrades. (This Triple Challenge should not be confused with the Triple Challenge multi-sport event that takes place in November at the Inanda dam, an event that, together with the Duzi canoe race, receives considerable support from the more adventurous Villagers.)

THE VILLAGE PEOPLE
“The majority of the club’s members come from the Highway area surrounding Kloof, Hillcrest, Winston Park and Gillitts, and quite a number of them have been involved with Villagers for almost three decades,” says club chairman Ant Kenny.

Roy and Kay Uren, Fred and Barbara Medlock, Rob and Gail White, Frank Clarke, Alf Burgess, John Wasserfall and Graham and Julyette Lewis are some of the current members who’ve seen the club grow from a mere handful of members to more than 300. The Comrades Green Number club has quite a few Villagers members, but special mention has to be made of Frank Clarke and Rob Collins, who have run 30 and 34 Comrades respectively.

One of the club’s proudest exports is one of South Africa’s true running legends, Willie Mtolo, who claimed the first of his two second places at Comrades in the colours of Hillcrest Villagers in 1989. Besides becoming the first of only two South Africans to win the New York Marathon, he’s had a marathon named after him and established his own running club, and many of the local records are still his today.

The women were never far behind either, with Paddy Williams, one of the fastest female runners in the 90s, and the late Jenny Allebone also taking to the road in the brown and white. Jenny was world-renowned as one of the fastest grandmaster runners in the world. Although only starting her running career late she represented South Africa numerous times whilst running for Villagers and still holds the record for her age group for several distances in South Africa.

WORK HARD, PLAY HARD
Club runs take place almost every morning and start at various venues in and around Hillcrest. A weekly time trial takes place every Thursday at 6pm, with a 4km and an 8km option available. Though club members enjoy a braai as often as the weather permits, Ant says “it has an uncanny habit of being sunny every day of the week except Thursdays!”

Weekend long runs are followed by a social at the clubhouse, a building that was inherited from the Hillcrest Rugby Club a few years ago. “After some renovations, Villagers now boasts some of the best clubhouse facilities in KZN,” says Ant.

RACES
The club’s annual Nimas Challenge in February was chosen as one of the top 20 marathons in the country last year. “We have been very fortunate to be sponsored by Nimas for the last eight years and this has assisted us greatly to position ourselves as one of the top marathons in the province. We receive great support from the club members and their families and probably have in excess of 200 helpers on the day,” says Ant. This year a wheelchair event was added to the marathon and half marathon.

The club is especially proud of its development programme and Ant says a number of their junior members come from the surrounding schools. “During the 10 years this programme has been running, more than 100 runners have been aided with their running expenses and given training and advice by experienced athletes.” The club assists up-and-coming runners with travel costs to races, refunds their entry fees if they place in the races, and subsidises their club membership fees as well as those of the Hillcrest Sports club.

“People often ask us what is so special about the club and the answer is very easy, who else has the opportunity to run, train and live along the most picturesque portion of the Comrades route, with all its history and tradition?” says Ant. “It is difficult to explain to other runners what it feels like to run through Hillcrest on Comrades day. The noise and support for our club members from the crowds along the way is huge!”