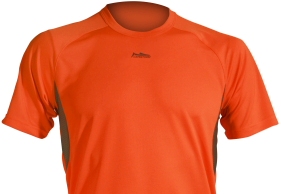 When I started running, you would often get a T-shirt as part of your entry fee at bigger races, and these shirts were all made from cotton. Typically, after a year or two of running, you had a pile of cotton race T-shirts, and you did most of your training runs in them. Those shirts were a kind of status symbol, especially the marathon and ultra shirts, because they quietly but effectively confirmed your running credentials. Unfortunately, those same cotton shorts were rather prone to absorbing sweat and becoming sopping wet, heavy and clingy, which was uncomfortable while running and damned cold when you stopped. And you began chafing, usually under the arms, which you would know all about when you hit the shower later, and even more so when you put on deodorant!

Things changed for the better in the mid-90s, though, as the various sporting apparel manufacturers started introducing moisture-management materials into the market. Suddenly we had clothing that didn’t just stay dry when we ran, but actually removed the sweat from our skin by transferring it to the outer side of the garment, where it could easily evaporate. Suddenly running was a whole lot more comfortable.

How does it work?
Modern sport clothing fabrics use a capillary action to wick sweat away from the skin. This is the ability of liquid to flow against gravity, where it spontaneously rises in a narrow space such as a thin tube, or in porous materials such as paper or clothing. This occurs because of inter-molecular attractive forces between the liquid and solid surrounding surfaces. Paper towels and sponges absorb liquid through capillary action, and clothing fabrics do the same. When this occurs in fabric, it is called wicking, because it mimics the capillary properties of an oil lamp’s wick, hence the term ‘moisture-wicking clothing’.

A shirt’s ability to wick is determined mainly by the type of fibre used to make the fabric. Natural fibres, such as cotton, have excellent moisture absorption and retention properties. They are considered hydrophilic, or water-loving. The problem with hydrophilic fibres is that they tend to dry slowly. Then you get hydrophobic, or water-hating, fibres. These are great at shedding moisture and drying quickly, but not at absorbing it. This means that sweat simply becomes trapped between your skin and your garment, still making you uncomfortable. The solution lies in combining hydrophilic and hydrophobic fibres and create what is called an ‘intimate blend’ fabric that brings users the best of both worlds.

Is there a downside?
Sweat naturally cools your body when it evaporates from the surface of your skin. Therefore, there is a school of thought that moisture-wicking materials may be dangerous for athletes in extreme conditions, because they will prevent sweat from pooling on the skin and thus cooling the athlete down, leading to a rise in core body temperature, which in extreme cases is potentially fatal. However, this theory has been denied by some scientists, who say that sports clothing simply will not have such a large effect on core temperature.

A more realistic complaint is that moisture-management clothing does such a great job of absorbing sweat that sooner or later your clothing takes on a permanent sweaty odour, no matter how many times you wash it. Point taken, said the manufacturers, and so they introduced various things to counter this. Nowadays, clothing comes out laced with antimicrobial agents like silver filaments, coconut particles, or other chemical treatments designed to kill any bacteria lingering in the fabric. There are also several detergent products now on the market that will restore the moisture-management properties of your clothing.

The bottom line is that moisture-management clothing won’t keep you 100% dry – you will still sweat and feel damp – but it will make feeling damp more comfortable!

Get Sweaty in These Tees!
There are many moisture-management clothing items on the market today – way too many to review here – but these three running Tees caught our eye nevertheless. So go get them and start getting sweaty while staying comfy in these great moisture-management shirts.

Cape Storm 42.2 Men’s Moisture-management Tee.
Made from Cape Storm’s Wick Dry moisture-management fabric that combines non-absorbent micro-fibre yarns and special finishing processes, the 42.2 Tee will keep your body climate dry and comfortable so that nothing can stand between you and your running goals. Also features mesh underarm panels for extra ventilation and reflective detailing to make sure you’re visible to motorists when out running in the dark.
Suggested Retail Price: R245

Puma Sport Lifestyle Tee
Featuring Puma’s U.S.P. moisture-management fabric that wicks away moisture so it can quickly evaporate, keeping you dry and comfortable during and after your run. Also has anatomically-positioned mesh sections across the upper back and down the sides for extra ventilation and air circulation, and reflective detailing for visibility in low light conditions.
Suggested Retail Price: R269.00