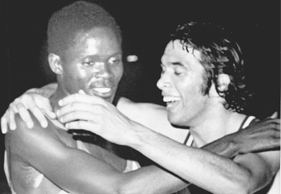 When I arrived at Ewald Bonzet’s home, I had no idea that it was the first time he was granting an interview in over 15 years. I had heard that he was intensely private, but it was only halfway through our chat that he told me he had almost turned the interview down. “I got a bit pissed off by journalists back in the day, because you couldn’t trust most of them, so I decided not to do interviews anymore. But with my recent health issues and after reading Lance Armstrong’s book, I now think I can be a role model to others. But I still asked a few friends in the running industry if you can be trusted, and they said yes, so I agreed to speak to you.”

Naturally, I felt both flattered and surprised by Ewald’s candid admission, but the more we chatted, the more I understood his attitude. He feels that he was badly treated by the press, particularly regarding the alleged racial incident at the 1975 Open SA Track and Field Champs, where he beat Titus Mamabola in the 5000m final but was disqualified for illegal blocking tactics, which were then attributed to his alleged racist outlook.

RACE ISSUES
Prior to 1974 there had been separate championships for white and black athletes, but with the segregation laws slightly relaxed, 1974 saw a third, combined champs meeting held for the first time, where Titus claimed the 5000m title. The following year the open champs took place on 31 March, where Titus took the 5000m title following Ewald’s disqualification, but Ewald bounced back to win the whites-only title on 19 April. (The white and black champs continued till 1977, but were then discontinued in favour of the open champs.)

As Ewald explains, there was no racial clash, nor did he try to block Titus. “I was leading the race in the last lap with Titus right behind me, and we had lapped the whole field. On the back straight, we came up behind Victor Liebenberg again, so I had to swing out to go round him, but then Victor heard us coming and also swung out, so I cut back inside, and suddenly an official was waving a red flag to signal that I had intentionally cut Titus off.”

The incident was blown out of proportion by the media and today is still mentioned as an example of the early problems of racial integration in the sport. Meanwhile, Ewald and Titus were actually good friends! “We went on a Springbok tour together to Europe the year before, where we shared a room and became good friends. And when we got back, I was almost arrested for complaining when Titus was refused entry to a restaurant at the Port Elizabeth airport, despite wearing his Springbok blazer.” Naturally, Ewald was horrified that he was being accused of racism and bad sportsmanship, so he wrote to Titus to set the record straight. Titus wrote back to reassure him that he knew the truth, and today that letter is one of Ewald’s most prized mementoes.

EARLY YEARS
Born in Caledon 59 years ago, George Groenewald Bonzet picked up the nickname Ewald, a short version of his second name. He took up running in high school and in 1968 won the Western Province Schools 800m and 1500m titles, following which he was awarded Junior Springbok colours for cross-country before joining the South African Air Force for two years of national service. “They kept me in Pretoria to run for the Air Force, and I was there with other top runners like Andries Krogman, Bernard Rose and Erich Essaman. Those were good days!”

When he returned to the Cape, Ewald enrolled at Cape Town Technical College to study to become an environmental health practitioner. After a stint competing in the USA, he began his working career with the National Department of Health, and in 1994 was transferred to the Western Cape Department of Health, where he still works today. He is married to Rene and they have a 16-year-old son named Ewald, who has obviously inherited his father’s running talent. “We’ve run a few 10km races together and he outkicks me, so I need to do something about that!” jokes Ewald.

MR VERSATILITY
Well known athletics statistician Ri?l Hauman describes the lanky, long-haired Capetonian as one of the world’s most versatile athletes during his heyday from 1972 to 1982. “At the time he was one of only five athletes in the world with a sub-four-minute mile and a sub-2:13 marathon – I doubt if there are any more, even today!” says Ri?l. “He set 11 national records on the track, won 10 national titles on track and road, and was awarded Springbok colours seven times between 1973 and 1979.”

Ewald ran some brilliant marathon times, but says he simply found 42km too long and boring. “I only ran marathons because I wanted Springbok colours on the road to go with my track and cross-country colours. At that time, you could only get national colours on the road for marathons. So, when I made my debut in Stellenbosch in 1983, I had to run 2:12 to qualify for the Western Province team for the Interprovincial Marathon in Port Elizabeth seven weeks later. I was awarded Springbok colours for my 2:12:08, but I still had to run in PE to keep them. The conditions in PE were terrible – you know the wind is howling when the water in the hotel toilet moves! But I still managed 2:13:59, which I think would have been a 2:10 under normal conditions.”

FALSE IDENTITY
Ewald followed that up with a 2:13:54 in 1984 in Bellville, then headed to the USA for the Chicago Marathon. As Ri?l writes, “I have a photograph of the lead pack in Chicago – Robert de Castella, Martin Pitayo, Simeon Kigen, Carlos Lopes, Steve Jones, Tony Sandoval, Joseph Nzau and Geoff Smith – a real who’s who of marathoning at the time. And right behind them, in his Bellville vest, is Ewald, looking as if he’s running in a Sunday morning Bellville pack run!”

Jones ran a world record 2:08:05 that day, with Lopes second and De Castella third, but Ewald had to settle for 21st in 2:17:24. “I was in 2:08 or 2:09 shape, but because of the ban on South African athletes I had to run under a false name, Peter Hunter, and I couldn’t put my drinks on the elite drinks tables. I stayed with the leaders till 32km, but was so dehydrated that I faded in the last 10km. That race put me off marathons for life!”

Soon after Chicago, Ewald retired from competitive running, but in December 1991, when he turned 40, he decided to start competing again. “I went to the 1997 World Masters Champs in Durban and won both the 5000m and 10 000m in the 40-45 age category. That was a big highlight for me.” His other big career highlight, pre-retirement, was achieving his goal of running the most sub-4:00 ‘dream miles’ by a South African. “I wanted to be the first guy to run 10, and that was quite an achievement then, especially since I was never really a true mile or 1500 athlete.”

HEALTH SCARE
Today Ewald still runs 100km a week, but after his recent health problems, he can’t go as fast as he used to. In 2008, he was lucky to survive after his appendix burst. “At my age an appendix shouldn’t burst, so the doctors did a battery of tests, including a bone marrow biopsy, and they found cancer. Suddenly I was taking 80 cortizone tablets a day and undergoing chemotherapy, but the doctors said they’d never seen anything like it, because I would run in the morning, go for chemo, then train again in the evening. I never got sick, but I did lose my hair. That was a big thing for me, because my hair has always been long!”

“Then came a bone marrow transplant, and the worst part was the recovery in the isolation ward. But I was only in there for 11 days, whereas normally recovery takes 50-60 days, and I was able to keep exercising, too. The corridor was 31 metres long and I walked up and own for 1.5 hours each day, which meant I covered 7.5km each time. I’m pretty sure I wouldn’t have made it if not for my running background, and my fitness contributed to my fast recovery. I was jogging again two weeks after coming home, and the doctors have told me to keep running, to help keep my bones strong. So I will also be running.”

2 thoughts on “Silent No More”