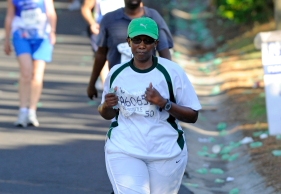 Speak about running to Joy Khaole of Old Mutual and you immediately pick up on one thing: She is one determined woman! Because this year she’s going to give the Old Mutual Two Oceans Half Marathon a real run for its money, having trained harder than ever for it in spite of a hectic work and travel schedule that makes her one of the busiest women you’re likely to meet.

As Head of Group Sponsorships, she leads a team that is responsible for managing Old Mutual’s relationships with partners on different sponsored projects, to get the maximum business value out of the group’s investment in these properties. That means this 51-year-old mother of three from Johannesburg regularly wracks up frequent flyer miles between Johannesburg and Cape Town, and has to fit in her training around a hectically busy schedule of travelling, meetings, launches media briefings, events and post-event functions. Yet she still finds a way to fit in her running.

“I try to go running as much as I can when meetings and travel arrangements allow. When they don’t, I try to make it up when I get back home, but I will always take my running shoes along and at least try to run on the treadmill in the hotel gym,” says Joy.

“Once you’ve made a commitment to run, you just have to make time to train. I do find it hard to follow a set programme, though, so I make my own programme around my schedule. I just make sure I get in at least one 10km run each week, plus two shorter runs of about 6km. Running has become a hobby and a passion. It gives me time to think and talk to myself, while getting some fresh air. I started running for me, to enjoy it, and it’s just me out there on the road, doing it my way.”

FROM INSPIRED TO INSPIRING
Joy took up running after riding in the lead vehicle at the Two Oceans ultra-marathon, which is one of the high-profile running events sponsored by Old Mutual. “Watching the leaders made me think that I would like to experience what they’re doing, not just watch. It looked so easy and gratifying, and I said to myself it would be fabulous to join them, so I made the Two Oceans Half Marathon my goal. I was never an athlete at school, but I started with a 5km fun run, then moved up to a 10km, then 21km. I wanted to prove to myself that I can do this.”

She has now run a number of 10km races and five half marathons, and her determination has rubbed off on others. She began running with Old Mutual colleagues in Cape Town, and then challenged new colleagues in Johannesburg to start running when she moved there in 2008. “Soon we had 10 to 12 people running and even doing races. I got them excited about running and team-building, and about supporting the races that Old Mutual sponsors, like the Two Oceans and Om Die Dam. The more people see that there are people committed to doing it, the more they want to do it, too.”

Closer to home, she has been joined on the road by her 28-year-old daughter, Khumo, who has also been inspired to take up running by her mother’s determination. “Khumo was a sprinter at school and found it hard to do long distances, but she did the Two Oceans Half with me with me in 2009. We often run weekend 10km races together now. She didn’t train enough to run Two Oceans in 2010, but this year she’s training hard to run with me again, despite telling me in 2009 that she’s never going to do it again!”

OCEANS MISSION
Unfortunately, after four attempts at the Two Oceans Half, Joy has no medals to show for her efforts after missing the official three-hour cut-off, despite improving her finishing time year on year from 3:12 to 3:03. So come 23 April, she’ll be back to try again, and this time she’s determined to get that finisher’s medal!

“In 2010 I was fitter than ever, but I ran the Om Die Dam Half just two weeks before Two Oceans. It had a four-hour cut-off and I finished comfortably in 3:15, but perhaps the races were too close together and that cost me at Two Oceans. This year they are more than a month apart, so it should be fine. I’m also doing more hills this year to make up the time I lost on Southern Cross Drive in previous years. I used to hate hills, but I’m learning how to run them now. I’ve trained harder than ever this year, because I want to finish what I started!”