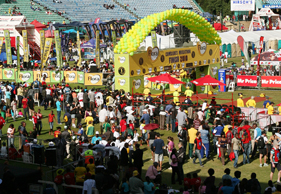 Late in July I decided that my long-standing dream of running the Comrades Marathon needed to become a reality. If I was ever going to achieve this goal, it was time to dig those old running shoes out of the cupboard and start the torture of plodding along the tarmac for hours on end.

I began to prepare myself mentally for the pain and discomfort which I would feel each time I headed out onto the road. It was clear in my mind that this was not going to be a fun experience, but rather one filled with pain and challenges, all for the sake of achieving something that I have wanted to accomplish for well over a decade. But being 33 years old and having never run a 10km, I knew that the potential for failure was far greater than that of success, especially as I had not done any regular exercise for the past ten years.

I did my first run at the end of July and started with a 1.5km slow jog around the block. My breathing was heavy and my legs felt as though the volcano that had been lying dormant in my calves for the past 10 years was about to erupt! After a day’s break, I was out on the road to tackle my 1.5km loop. Again, I was breathing heavily and my legs had molten lava running through their veins, but something happened that day. The one thing that I did not expect was the slight sense of enjoyment that I experienced while plodding along on the hot tarmac.

Little did I know that this feeling would grow almost every time I went out for a run. If there is a bug, it has been biting me in my sleep every night for the past four months, as I now find myself completely consumed by the world of running. As a novice, there is so much to learn and discover, which has been adding fuel to the fire which is found less in my calves nowadays, and more in a desire to get out onto the road and to spend time doing something I have grown to love. My preconceived ideas were completely wrong! – KEVIN ANTUNES

Voluntary Seeding
Why do 10min per/km joggers and even slower walkers start right at the front of a race and then, almost to show you that they have as much right as anyone to be there, proceed to walk two, three or even four-abreast? I can’t dispute their right to be there, as they have paid their entry fee like everyone else. My question is why do they need to start at the front when they intend walking/jogging with friends? They are not participating for prize money or trying for a PB. They are hindering those runners who start behind them and are in fact looking for an age category position or PB.

I fully understand the need to start at the front when you are trying to break a specific time, irrespective of your pace, or, looking to break five hours in a marathon to qualify for Comrades or Two Oceans. However, when you are just going out to get your exercise and enjoy the camaraderie of other runners or walkers, surely you should start a bit further back in the field, knowing that your group will not be the cause of competitive runners starting behind you and coming to an almost dead stop in order to get past. – SCOTT VISSER

Do you agree with Scott? Log on and vote on our online poll.

Goodbye SA!
After spending almost three years in South Africa, we will be moving back to Belgium. I was wondering what I will miss the most. I enjoyed the beauty of the country, I liked the nice summer weather and the mild winters, but what I will definitely miss the most is the thrill of all the amazing road races! The combination of challenging, scenic tracks, extremely well organised water points and enthusiastic spectators all along the road must be unique in the world.

A special word of thanks goes to all the ArcelorMittal athletes who supported me during my two years of long distance running. They adopted me as part of the running family and gave me well appreciated advice about what to do and what not.

To all runners, I wish you the best for 2011. May it be a superb running year without injuries or illness! – PETER VAN DE WALLE

Are We Destroying our Elites?
Please do an article on the hardships of our elite road athletes who win races throughout the year, even winning big races such as Comrades and Two Oceans, but battle to get sponsors and therefore can’t concentrate on what they’re good at, running! Some battle to survive year after year, while young trail runners like Ryan Sandes get all the coverage because they run in what is perceived as exotic locations.

How can we expect to beat the rest of Africa in our own backyard if the only incentives are the prize money elite runners receive at races? We often hear SA doesn’t have what it takes to beat our neighbours, or to run sub-2:10 marathons, but why is this? It would be interesting to see what the big clubs pay to support local athletes versus international athletes who don their colours only on race day. To get sponsors in SA, you first have to prove yourself (at your own cost) at international level before any sponsor will look your way. I think greed is killing our elites. – J. GRASSMAN