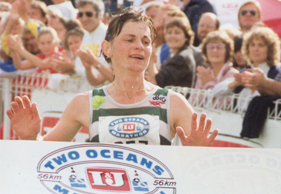 Her running career may have been cut short by illness and injury, but Monica Drӧgemӧller packed an incredible number of wins, podium placings and records into an eight-year golden spell in the 80s and 90s. – BY SEAN FALCONER

Top runners and athletics statisticians alike will tell you that winning the 56km Two Oceans Marathon is very, very hard. You need the speed of a top marathoner as well as the endurance of a top ultra-distance runner – and you also need everything to go your way on race-day! Little surprise then that only 17 out of 53 male and female winners in the 41-year history have been able to claim a second title. Furthermore, only six of those – two men, four women – went on to win the race a third time, and only one was able to claim a fourth title, making Monica Drӧgemӧller the undisputed Queen of the Two Oceans.

She won the race for the first time in 1988, then returned to record three straight wins from 1990 to 1992, one of only three runners to win three on the trot. Amongst currently active runners, Elena Nurgalieva and Marco Mambo each have three wins and could equal Monica’s record, but for now she remains the most successful Two Oceans winner of all time. She is also the only runner, male or female, to have won the Peninsula Marathon four times, and her 1990 course record of 2:37:19 still stands 21 years later, as does her 1987 SA 30km record of 1:53:01.

SPORTY GENES WITH NATURAL TALENT
Born in 1959 in Pietermaritzburg, the youngest of four sporty children, Monica was a keen runner at school, specialising in the 1500m and cross-country. She earned Natal schools colours for athletics, and later, while studying to become a pharmacist at Potchefstroom University, she earned Western Transvaal colours for hockey. “I found that practical classes clashed with running training, so hockey became a better outlet, but I still ran when I could,” says Monica. Having completed her studies, she moved to Cape Town to begin working. “I wanted to stay in the Cape, and was lucky enough to get a position in the pharmaceutical industry with Beechams, which later merged with Smithkline, and I’ve been there 27 years now.”

Soon after arriving in Cape Town, she began jogging round Rondebosch Common, then a friend suggested she join a running club. “He gave me details for Celtic Harriers, but I am very shy, so it took me nine months to pluck up the courage to go to them. I’m glad I did, because I found it a great way to meet new people and get to know the city. Celtics really made me feel welcome, which was wonderful because I didn’t have any family here.” At first she only joined the club runs, but Monica soon graduated to races – and right away she showed great potential. “In my first half marathon, I remember Allister Walker saying round about halfway, ‘If you carry on at this pace, you’ll finish under 90 minutes,’ so I decided to give it a try and did 88 minutes.” From then on she regularly finished in the top placings.

DEBUT MARATHON SUCCESS IN SUB 3 HOURS
In 1984 Monica entered her first marathon, the Peninsula, but admits she had no idea how to race the distance. “I was so inexperienced that I just ran it as I felt and battled towards the end, but I knew I was in the lead and was determined not to walk.” Winning in 2:55:38 saw her selected for the Western Province team for the South African Marathon Champs in Port Elizabeth just 28 days later. “You had to break three hours just to make the team, and I went to PE more afraid of not breaking three hours again, than of any of the other girls!” Despite her nerves, she ran a PB 2:50:28 to finish second. Then at the 1985 Champs, Monica took another three minutes off her PB, finishing in 2:47:33, but disappointingly ran out of steam to drop from second to fourth in the last kilometre as her provincial teammates Liz Eglington and Barbara Webb passed her. “I had nothing left and couldn’t do anything about it. Still, it was great to have three Western Province runners in the top four.”

UP TO ULTRAS
Early in 1988 Monica won the Peninsula for a second time, clocking 2:45:14, then decided to tackle the Two Oceans. “They had a car prize for a new course record, and my coach Len Keating said he reckoned I could break it, so I entered.” After an epic duel with Celtics clubmate Liz Eglington, Monica came home in a then course record 3:44:29, while men’s winner Thompson Magawane shattered the men’s record as well, and both drove off in their smart new black Volswagen Jettas. “I had a little beetle and had always liked small cars, so the car wasn’t my big incentive. It was all about pushing boundaries and seeing what I could do. The Jetta was very fancy, though, so eventually I sold the beetle.”

A few months later Monica returned to the Oceans, leading from start to finish to win in 3:42:39, but says the weather really affected her. “In 1988 there were a lot of people on Constantia Nek, which helped pull me up the hill, but the rain kept them away and that made it a harder race – and I was also feeling the effects of that 2:37.” Monica then won the 1990 Knysna Marathon (2:48:29), followed by her record fourth Peninsula win in 1991 (2:43:13) and a third Two Oceans title in a time of 3:50:23, again leading from start to finish.

GREEN AND GOLD
Following her superb 2:37, Monica was awarded Junior Springbok colours, which she would be wearing at the 1991 SA Marathon Champs in Durban. She finished second in 2:45:26, but says she didn’t feel right. “It felt like my body was asleep, and I had also felt it at work – I always felt cold, and I often wore three jerseys and extra socks. I was diagnosed with an underactive thyroid, so I started taking Altroxin and things improved, but I am still disappointed about that race, because I would have liked to run 2:37 in SA colours.”

A year later she finished fourth at the 1992 Marathon Champs in 2:41:35, then started preparing for another Two Oceans, but now she picked up an injury – it was the start of Monica’s sciatica problems, which would later be diagnosed as a slipped disk in her spine. “I decided to start and see how I felt up till Hout Bay, then decide whether to carry on. Fortunately my hamstrings held up and I went on to win, but what made it special was that I didn’t know I could finish.” Her winning time was 3:49:16, and part of her winner’s purse was an entry plus air ticket for the Berlin Marathon that September, where she finished 28th in 2:53:41.

RACE RUN
Unfortunately, that was effectively the end of Monica’s competitive running career. There were a few comebacks dotted through the years, even a few race wins, but her back kept flaring up again, and it was only in the late 90s that she finally found some relief through yoga. “At first I was petrified of doing a head-stand, but the first time I did it, the ease of being in that position was really great. If I could have my peak running years again, I would combine yoga with my running.”

A torn meniscus followed in 2006 – a freak accident when she twisted her knee while waiting to board a flight to Kenya for a conference – and she is currently having problems with her ankle, but she still tries to get a bit of running in. “I have good patches, like last year when I felt up to following one of my long-time dreams, to do the Inca Trail in Peru. It’s a four-day hike and I found it a wonderful experience, very spiritual. The Incas have always fascinated me, and I was also spurred on by the sudden passing of fellow runners Lindsay Weight and Lynne Spence. That made me realise that you only have so much time and you need to do what you want to while you can.”

“I was totally in love with running, I wanted to see what my body could do, but in retrospect I probably should have been a bit cleverer. One always thinks this is never going to end, that you can just push, push, push… But running will always be part of me, despite my injury problems. Once a runner, always a runner!”