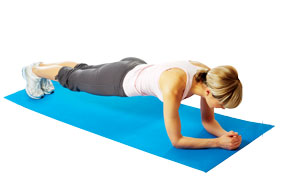 REWIND
Let’s rewind quickly; most athletes train their core stabilisers inadequately compared to other muscles. Running alone doesn’t strengthen the core sufficiently and therefore weaknesses or lack of sufficient coordination in the core can lead to less efficient movements, strain, overuse and injury. Add the exercises below to those you have been doing in Part 1 for the ultimate core workout!

Do the exercises three times a week and keep the following in mind:
Begin with two sets of 15 repetitions and progress to three sets of 15-20 repetitions.
Progress to more functional exercises as control is developed. Don’t tilt the pelvis or flatten
the spine.
This first stage of core stability training begins with learning to stabilise the abdominal wall. Proper activation of these muscles is considered crucial before progressing to more
dynamic workouts.

PRONE PLANK
This is a fundamental, static core stability exercise.
Support yourself with forearms resting on the mat, elbows bent
at 90? and toes on the mat.
Maintain the spine in a neutral position. Recruit the gluteal muscles and keep your head level with the floor. Keep a slight bend in the knees, while maintaining the abdominal brace. Start by holding the position for 30 seconds, working up to one minute for two to three repetitions. If your lower back sags and you feel discomfort, either adjust your position or release the position and rest.

Progression: One leg can be lifted off the mat, held for five seconds, and then repeated on the opposite side.

SIDE PLANK
This exercise is designed to challenge your body against gravity, and is an ideal exercise to train the back, side stomach muscles and gluteus.
Start by lying on your right side resting on your elbow and forearm, which should be directly underneath your shoulder.
Lift the pelvis from the floor and hold it in a straight line ‘plank’ position. The hips should not be allowed to sag toward the floor. Start by holding the position for 20 seconds, working up to one minute holds for two to three repetitions.

Progression: Raise the top foot to increasingly challenge the core and gluteus.

FOUR POINT SQUAT
This stability exercise strengthens all the lower leg stabilisers, quadriceps as well as the gluteus.
Stand on your right leg. Bend the right leg into a squat position while extending your left leg in front of you.
Reach as far as you can with your left foot, keeping it just above the floor.
Ensure you maintain hip alignment and that your knee is in line with the big toe of the foot on the floor. Return your left leg to the middle without touching the floor and repeat the above movement to the side, behind you and to the other side, taking your left leg behind your right leg, thus performing the movement in the 12, 3, 6 and 9 o’ clock positions.
Repeat on the left leg.

Progression: The above movement can be performed on a balance mat.

LUNGE
Stand with feet shoulder width apart.
Take a big step forward with the right leg.
Lower your body straight down by bending your left hip and knee until your right thigh is parallel
to the floor.
Ensure that the right knee is not pushing forward beyond the toes of the right foot.
Contract the gluteus of the left leg and push yourself back into the starting position being careful not to arch or use the back.
Perform the same movement with the left leg.
Progression: Once in the lunge position, lift the heel of the front foot slightly off the ground and hold position for five seconds maintaining hip alignment.
The value of core exercises cannot be over emphasised. Remember, by neglecting your core, you are neglecting your running!
Richard is a former South African and African Elite Men’s Triathlon Champion. He has an honours degree in biokinetics and is highly regarded in the field of conditioning, strength and flexibility for endurance athletes.