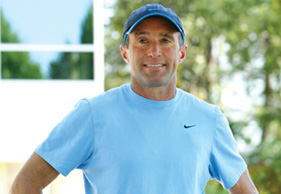 Having never raced anything longer than a marathon and been in the racing wilderness for ten years due to illness and injury, American legend, Alberto Salazar, appeared from nowhere to win the 1994 Comrades Marathon. And the devout Catholic and reborn Christian knew exactly who to thank for his amazing Lazarus act. – BY SEAN FALCONER

Halfway through the 1994 Comrades, Alberto Salazar hit the wall. Hard. The American with one Boston and three New York Marathon wins had been leading the race since 21km, at record pace, but with 48km done he was feeling bad. By 55km he was in really bad shape and his pace faltered, his thoughts dominated by the lure of bailing – but then his faith took charge to complete what his body was struggling to do.

“What happened was a miracle. I truly believe that,” says Salazar. “With 20 miles (32km) to go I was ready to drop out. There were no squeezies at the water points and I was running out of energy. I had Gu sachets taped to my water bottles every four miles, but that just wasn’t enough. I remember walking a few steps, but then I remembered that I was doing the race for God, so I started praying. What kept me going was that ongoing dialogue with God, and he led me to the finish.”

Alberto dug deep into his reserves and eventually won in 5:38:39, just over four minutes ahead of local hero Nick Bester, who put in a remarkable late surge to climb from fifth to second. But the day belonged to the American, who once again tasted victory after believing that his competitive running career was over. No surprise then that Alberto ranks his Comrades win as his greatest. “Comrades is in my top three along with my New York and Boston wins, but if I had to pick one race, I would put it first. Winning Comrades was more satisfying than anything I’ve done. And without a doubt the hardest thing – mentally, physically and emotionally. Nothing compared to it!”

FRONTRUNNER
Born in Cuba in 1958, a young Alberto immigrated to the USA with his family. At school and college he shone on the track and in cross-country, winning several state and national titles. He was known for his hard front-running and brash confidence – some called it arrogance – and he gave everything he had in both training and races. That won him many races, but also landed him in trouble in the 1978 Falmouth 10km race. He collapsed with a temperature of 42?C and his condition was so serious that a priest was called to administer the last rites, but thankfully he survived.

In 1980, Alberto ran and won his first marathon in New York, in what was then the fastest ever debut time, 2:09:41. A year later he retained his title in a world record 2:08:13, but the course was found to be 148 metres short and the record was not ratified. In 1982 he won the Boston Marathon, winning an epic sprint finish against Dick Beardsley before collapsing and being taken to hospital, where he was given six litres of water intravenously because he had not drunk during the race. Later that year he was second in the World Cross-Country Champs, and won a third consecutive New York.

In 1983 he twice broke the US 10km record, finished fourth in the World Cross-Country Champs and was national 10 000m champion, but he finished last in the World Champs 10 000m while suffering from bronchitis. Then he was beaten for the first time in a marathon, finishing fifth in Rotterdam, and the following year he finished a disappointing 15th in the Los Angeles Olympic Marathon. Battling recurring injuries and illness, his rapid decline continued, until eventually he was barely able to jog. By the end of 1984 his racing career was finished.

WASHED UP
Many thought that Alberto’s massive effort to win Boston had done so much damage to his body that he was never the same runner again. However, the root cause of his problems was his lungs. “Before the World Champs in ’83, I got a really bad cold that turned into severe bronchitis, which precipitated asthma. But I didn’t know I had asthma until the early 90s, when I was wheezing on easy runs. Basically, I’d lost 40% of my lung function. It just got a little worse every year – there was really nothing I could have done about it.”

But back in the 80s, not knowing why his running was going backwards so fast, Alberto desperately increased his mileage and intensity to try to regain his former racing levels, until his body just gave in. “I had a lot of injury problems and needed several surgeries on my knees and hamstrings. I just could not run well any more, and it was frustrating and depressing.” Then came the turning point in 1993, when a doctor suggested he try Prozac (an antidepressant) to lift his mood. It did more than that – it made him feel so good that he began enjoying his running again.

BACK FROM THE DEAD
Soon he felt ready to race again, but he knew he no longer had the speed to be competitive in marathons, so his thoughts turned to ultra marathons. “My friend Joel Laine, who is now the race director of the Paris Marathon, told me about the Comrades. It sounded like a good challenge, so I entered.” When the news broke in South Africa, most pundits immediately wrote off his chances of doing well, since he had never run an ultra before, and had not been heard of since the mid 80s. But when asked what his goal was for the race, he simply said, “I wouldn’t be here if I didn’t think I could win.”

Alberto says that Comrades was nothing like what he was used to back in the US. “What I remember most was that we started in the pitch dark. I was used to knowing who I was racing and seeing them at the start, but here I only knew a few of the runners, and I couldn’t see any of them! At the gun, the guys took off like it was a 10km race and I was panicking about being left behind. I had planned to run just behind the leaders, and then hopefully pull away in the final miles, but later the leaders started coming back to me and by 21km I had taken the lead. I’d done exactly what I didn’t want to do, but I decided to just keep going.”

He says the South African journalists on the media truck didn’t seem to take kindly to having a foreigner leading ‘their’ race. “They were yelling to me, ‘Bester is coming’, or ‘Fordyce is coming’, but at halfway, the press truck pulled up next to me and they heard me praying, and I think that swung their attitude. They cheered me home in the end.” Unfortunately, he didn’t get quite the same reaction from the US media. “Some of them called me a religious nut, and wrote that it was contradictory for me to talk about running for God and at the same time take Prozac to be able to run. I didn’t let that get to me, though, because I’m more concerned about what God thinks. Some people will always find fault with whatever you do, especially when it comes to faith.”

NEXT CHAPTER
Alberto planned to run more ultras, but a freak injury put paid to those plans. “Six months after Comrades, I was doing bounding drills on grass when I stepped in a hole, twisted my foot and tore my posterior tibial ankle tendon, although I didn’t know it at the time. So I kept running and wound up rupturing my rector femoris quad muscle, then had to have pins put in my foot, and had a heel bone replacement. I thought I had opened the door to a new ultra-marathoning career, but you know you’re done when you’re still limping two years after surgery!”

That saw him shift his focus to coaching and today he heads up the Nike Oregon Project, which aims to once again produce world-class US marathoners, since no US man has won Boston or New York since 1983. The success he has already achieved saw him named 2009 Coach of the Year by USA Track & Field. He lives with his wife, Molly, and three kids in Portland, Oregon, near the Nike headquarters and training facilities.

However, life continues to throw curve balls at him – but more miracles, too. In June 2007 he suffered a heart attack, aged just 48, and had no pulse for 14 minutes. “Your chance of surviving in good health if you go more than five minutes without a pulse is not good, and God could have saddled me with major physical or mental problems, but he didn’t. I can’t believe how blessed I am that this miracle took place. My health is pretty good now. I go for regular stress tests, my cholesterol levels are low and my arteries are wide open. I still jog about four miles a day, still with a noticeable limp, but I feel great. Clearly God still has plans for me.”